Antonie (Anton) Pannekoek (2 January 1873 – 28 April 1960) was a Dutch astronomer, Marxist theorist, and social revolutionary. He was one of the main theorists of council communism (Dutch: radencommunisme).

Pannekoek studied mathematics and physics in Leiden from 1891. Even before he went to college he was interested in astronomy and studied the variability of Polaris. He published his first article, On the Necessity of Further Researches on the Milky Way, as a student. Some years after he had finished his study he started work at the Leiden Observatory (Leidse Sterrewacht), where he wrote his thesis.

After reading Edward Bellamy's Equality, Pannekoek became a convinced socialist and started studying Karl Marx's theories. Soon Pannekoek became a well-known Marxist writer, writing for both Dutch and German magazines. Dissatisfaction with his job at the observatory led him to move to Berlin, where he became a lecturer at the school funded by the Social Democratic Party of Germany. His radical opinions soon got him in trouble with both the German government and the labor unions.

He was on holiday in the Netherlands when the First World War broke out. Prevented from returning to Germany, he started work as a chemistry and science teacher. Though the Leidse Sterrewacht wanted him back, government opposition because of his Marxist sympathies made this fall through. Instead, the Amsterdam city council got him an appointment at the University of Amsterdam in 1925, first as a part-time professor, and in 1932 as a full professor. 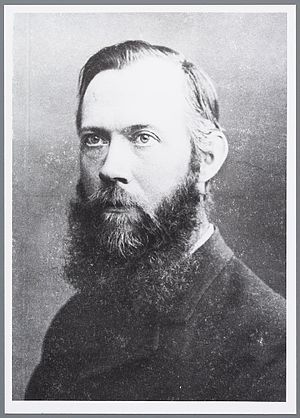 In his scientific work, Pannekoek started studying the distribution of stars through the Milky Way, as well as the structure of our galaxy. Later he became interested in the nature and evolution of stars. Because of these studies, he is considered to be the founder of astrophysics as a separate discipline in the Netherlands. He became member of the Royal Netherlands Academy of Arts and Sciences in 1925.[1]

Apart from his theoretical work, he also went on several foreign expeditions to observe solar eclipses and take spectra of stars. In 1926 he undertook an expedition to Java in order to chart the Southern Constellations. He was also interested in the history of astronomy and his book, A History of Astronomy, is considered a standard reference on the subject.

His work in galactic structure, astrophysics and the history of astronomy was of international renown and won him an honorary degree from Harvard University in 1936, as well as the Gold Medal of the Royal Astronomical Society in 1951. The crater Pannekoek on the Moon and the asteroid 2378 Pannekoek are named after him.

The Astronomical Institute Anton Pannekoek at the University of Amsterdam, of which he had been a director, still carries his name.

Pannekoek was best known for his writing on workers' councils. He regarded these as a new form of organisation capable of overcoming the limitations of the old institutions of the labour movement, the trade unions and social democratic parties. Basing his theory on what he regarded as the practical lessons of the Russian revolution, Pannekoek argued that the workers' revolution and the transition from capitalism to communism had to be achieved by the workers themselves, democratically organised in workers' councils.

He was a sharp critic of anarchism, social-democracy and Vladimir Lenin and Leninism. During the early years of the Russian revolution, Pannekoek gave critical support to the Bolshevik regime, a position shared by fellow council communist Herman Gorter and Rosa Luxemburg. He expressed misgivings about the authoritarian tendencies of Leninism, fearing for the socialist character of the Russian Revolution unless it should find a rectifying support in a proletarian revolution in the West. His later analysis of the failure of the Russian revolution was that after Lenin and the Bolsheviks came to power, they crippled the soviets. Instead of workers' councils, the Bolsheviks had instituted the rule of their party, which in Pannekoek's view is what led to the institution of the Bolsheviks as a new ruling class. He put his views forward in his 1938 book Lenin als filosoof : een kritische beschouwing over de filosofische grondslagen van het Leninisme originally published under the pseudonym J. Harper, translated in English as Lenin as philosopher - a critical examination of the philosophical basis of Leninism (1948).

In a pamphlet Pannekoek strongly attacked and rebutted the arguments of social Darwinists such as Herbert Spencer, whom Pannekoek dubbed "Bourgeois Darwinists".

On the basis of Darwin's own writings—in particular on The Descent of Man (1871)—Pannekoek stated:

[The Bourgeois Darwinists] claimed that only the extermination of all the weak is in accordance with nature and that it is necessary to prevent the deterioration of the race, while protection of the weak is unnatural and leads to degeneration. But what do we see? In nature itself, in the animal world, we find that the weak are protected, that they don't need to persist by their individual strength, and that they are not exterminated due to their individual weakness. And this arrangement does not weaken a group in which it is the rule, but strengthens it. The animal groups in which mutual aid is best developed maintain themselves best in the struggle for existence.