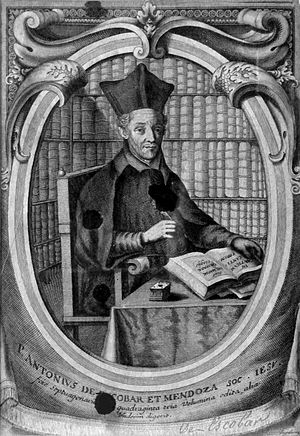 Monsignor Antonio Escobar y Mendoza (1589 – 4 July 1669) was a Spanish nobleman who is best known for his Catholic teachings.

Born at Valladolid in Castile, he was educated by Jesuits before entering into holy orders of the Church of Rome, aged fifteen.

Escobar established his reputation quickly as a radical Jesuit missionary preacher and was also a prodigious writer: his collected works comprise eighty-three volumes. Escobar's first literary efforts were Latin verses in praise of Ignatius Loyola (1613) and the Virgin Mary (1618); but he is most famous for his writings about casuistry. His principal works focus on exegesis and moral theology. Of the latter his best-known works are Summula casuum conscientiae (1627), Liber theologiae moralis (1644) and Universae theologiae moralis problemata (1652–1666).

Escobar's Summula received severe criticism from Blaise Pascal, in his fifth and sixth Provincial Letters, for being an open invitation to inculcate loose morality.[1] Pascal coins the famous maxim that purity of intention may be a justification of actions which are in themselves contrary to the moral code and to human laws, and its general tendency is to find excuses for human frailties. Escobar's doctrines were also disapproved of by many other Catholics, being barely tolerated by the Church in Rome. Molière subjected Escobar to ridicule in his customary witty style, and Escobar was also the target of criticism by Boileau and La Fontaine. By the 18th and in the 19th century, in France the name Escobar had become synonymous with "adroitness in making the rules of morality harmonize with self-interest", viz a casuist.

Although Escobar is commended as having followed simple habits in his personal life, being a strict adherent to the rules of the Society of Jesus,[2] it was for his overzealous efforts to reform the lives of others he was rebuked. It was said that Escobar "purchased Heaven dearly for himself, but gave it away cheaply to others".[3]

Mgr. Escobar died at Valladolid in 1669, following which, ten years later, Pope Innocent XI publicly condemned sixty-five of his eighty-three works, as well as teachings by Suarez another Casuist, for being propositiones laxorum moralistarum: the Vatican thereby forbade their promotion by any Roman Catholic and threatened excommunication for doing so.[4]