The Antonov An-148 (Ukrainian: Антонов Ан-148) is a regional jet airliner designed by the Ukrainian Antonov company and produced by Antonov itself and also on outsource by Russia's Voronezh Aircraft Production Association. Development of the aircraft was started in the 1990s, and the maiden flight took place on 17 December 2004. The aircraft completed its certification programme on 26 February 2007. The An-148 has a maximum range of 2,100–4,400 km (1,100–2,400 nmi; 1,300–2,700 mi) and is able to carry 68–85 passengers, depending on the configuration.

The Antonov An-158 is a stretched fuselage version of the aircraft, accommodating up to 99 passengers.

The An-148 aircraft is a high-wing monoplane with two turbofan jet engines mounted in pods under the wing. This arrangement protects the engines and wing structure against damage from foreign objects (FOD). A built-in auto-diagnosis system, auxiliary power unit, high reliability, and the wing configuration allow the An-148 to be used at poorly equipped airfields. Modern flight and navigation equipment, featuring five 15 by 20 cm (5.9 by 7.9 in) liquid crystal display (LCD) panels built by Russia’s Aviapribor and a fly-by-wire system enable the An-148 aircraft to operate day and night, under Instrument flight rules (IFR) and Visual flight rules (VFR) weather conditions on high density air routes. Similar to the Boeing 737, the main landing gear rotates into the belly of the aircraft when in flight, with partial doors covering the legs and the sides of the tires remaining exposed. Other design advantages include the high fuel-efficiency of the Motor Sich D-436-148 engines and entrance stairs that enable boarding and deboarding the aircraft without extra ground equipment.[9]

In 2002, production of the first 3 prototypes was begun at AVIANT. On 17 December 2004, the first prototype completed its maiden flight. Second prototype joined the testing programme in April 2005.[11] During the certification programme, the two prototypes performed about 600 flights in total.[12] On 26 February 2007 the aircraft, its D-436-148 engine and the AI-450-МS auxiliary power unit were certified by the Interstate Aviation Committee of Russia and the State Aviation Administration of Ukraine. On 28 June 2009, the first serially produced An-148, manufactured at VASO in Voronezh took to the skies.[11]

The An-148 is manufactured by the Ukrainian Kiev AVIANT plant (now "Antonov Serial Production Plant") and Russia's Voronezh Aircraft Production Association (VASO). Although numerous companies are involved in the project, at least 70% of the aircraft's hardware is made by Russian manufacturers.[13] The An-148's list price is about $24–30 million.[9] The main problem with the project has been increasing the aircraft's sluggish production rate. The then-independent AVIANT plant initially failed to satisfy to growing orders, leading to VASO's growing involvement in the aircraft's assembly.[9] 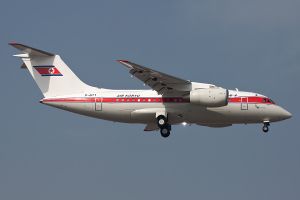 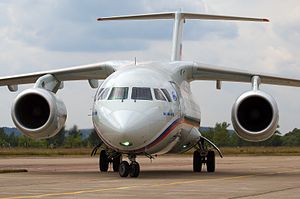 In April 2005, the Ilyushin Finance Leasing Company ordered the first series of An-148 for the Krasair airline. Lease agreement calls for 10 aircraft with an option on 5 units valued at $270 million.[26]

On 2 June 2009, the first An-148 entered commercial service with the Ukrainian carrier Aerosvit.[27] The first passenger flight was from Kharkov to Kiev; the aircraft had the civilian registration UR-NTA.[28] By November 2009, Aerosvit was operating the An-148 on the Kiev–Odessa and Simferopol–Lviv routes, performing two flights a day with the average flight time of 4–5 hours.[9]

On 21 December 2009, the An-148 was put into service in Russia with Rossiya airline. The first passenger flight was FV135 from Pulkovo Airport in Sankt Petersburg to Sheremetyevo International Airport in Moscow.[11] By 20 May 2010, Rossiya's An-148 fleet had accumulated a total of 915 flight hours and performed 710 landings.[29] Rossiya complained that the aircraft experienced some reliability problems.[30] There were some technical problems with the aircraft, and pilot training could not be ramped up fast enough, leading to pilot shortages.[29] However, by 2011 the situation had clearly improved.[31]

On 15 February 2010, the An-148 started international flights to the European Union (Poland) with the Aerosvit airline.[32]

On 18 April 2013, the first serial An-158 version was delivered to the Cuban flagship airline Cubana de Aviación. According to Antonov, Cubana additionally ordered 2 more aircraft,[33] while other sources report this order to be for 10 aircraft.[34]

On 28 April 2013, Ukraine’s Antonov aircraft maker handed over a third An-158 passenger airliner to Cuba and signed a contract for the delivery of three more.

The Russian ambassador in Bolivia and the government of Evo Morales are negotiating the acquisition of one aircraft of this type for the use as the presidential carrier and other 8 for the state-owned airlines: Boliviana de Aviación (BoA) and Transporte Aéreo Militar (TAM).

In April 2016,Indian company Reliance defense limited and Antonov entered into an agreement to construct an aircraft based on An 148/ An 158 for defense and commercial purposes.[35] 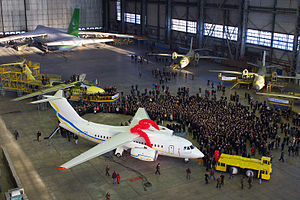 Rollout ceremony of the first Ukrainian-built, serially produced An-148 in December 2009 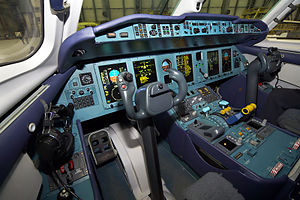 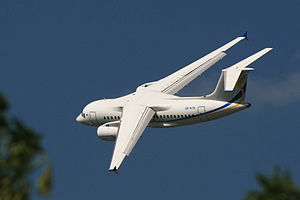 An An-158 during a flight display

On 5 March 2011, an Antonov An-148 (assembled by VASO) carrying test registration 61708 crashed during a test flight in Belgorod region, Russia, after an inflight break-up killing all 6 crew members on board. An investigation commission found that the crew permitted the aircraft to accelerate more than 60 knots above its "Never Exceed" speed in an emergency descent, which led to the inflight break-up.[52] Witnesses on the ground reported a wing had separated from the aircraft in flight. The aircraft was due to be delivered to Myanmar, where two of the dead were from.[53]