The Antonov An-30 (NATO reporting name: Clank), is a development of the An-24 designed for aerial cartography.

The first aerial survey version of the Antonov An-24 was designed by the Beriev OKB and designated An-24FK. The FK stood for fotokartograficheskiy (photo mapping).[3] The prototype was converted from a production An-24A at Beriev's No. 49 construction shop during 1966. The An-24FK made its first flight on 21 August 1967, with state acceptance trials being completed in 1970 and civil certification completed in 1974. Redesignated An-30, production began in 1971 at the Antonov.[2] 123 production An-30s were manufactured between 1971 and 1980[4] in Kiev in 2 main versions. 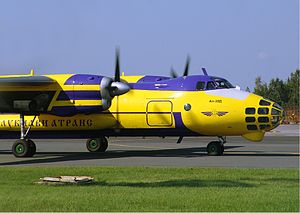 The Antonov An-30 is a derivative of the An-24 fitted with an entirely new fuselage forward of frame 11. The fuselage nose is extensively glazed, reminiscent of the Boeing B-29. Housed within the new nose section is the navigator and precise navigational equipment, including an optical sight for ensuring accuracy of aerial photography.[3] To enable accurate and repeatable survey flights, standard equipment for the An-30 included computer flight path control technology.[7] This additional equipment replaced the radar. The positioning of the new navigational equipment required the flightdeck to be raised by 41 cm in comparison to the An-24,[3] giving the aircraft its other main feature, a hump containing the cockpit, similar to the Boeing 747.

The radio operator and flight engineer sat in the first cabin aft of and below the flightdeck. The mission equipment was located further aft, in a cabin featuring five camera windows in the floor. Each camera window could be closed with covers to protect the glass panels. The covers were located in special fairings protruding from the fuselage underside. In the normal aerial photography role, four or five cameras were carried aboard. Three cameras were mounted vertically, intended for mapping purposes. The remaining two cameras were pointed at an angle of 28° on each side of the aircraft, for oblique photography. The same fuselage compartment contained workstations for two camera operators and a crew rest area.[8] 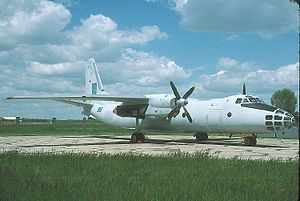 As well as its principal use as a survey aircraft, it has also been used by Bulgaria, Czech Republic, Romania, Russia and Ukraine to carry out surveillance under the Open Skies Treaty.

The An-30 has also been used as a weather control aircraft as the An-30M. Some have been fitted with frozen tanks of carbon dioxide to be ejected into the sky to form artificial rain clouds. These An-30s have also been put to use to avoid crop-damaging hailstorms and also to maintain good weather for, as examples, new airplane maiden flights, important parades like the 1st of May and the 850th anniversary of Moscow in September 1997.[9]

Between 1971 and 1980 a total of 115 aircraft were built and 23 were sold abroad to Afghanistan, Bulgaria, China, Cuba, Czechoslovakia, Mongolia and Vietnam.

An-30s completely mapped Afghanistan in 1982, with one shot down by a MANPADS during an aerial photography flight in the Kabul area south of the Panjshir Valley on 11 March 1985. Cuban An-30s saw active service in Angola in 1987.

On 22 April 2014, a Ukrainian An-30 was hit by small arms fire while on a surveillance mission over the town of Sloviansk in Eastern Ukraine, which was being held by pro-Russian separatists. The plane landed safely with minor damage.[10] On 6 June 2014, a Ukrainian An-30B was shot down near the city of Slavyansk in eastern Ukraine, reportedly by a MANPADS fired by local separatists.[11]

On 23 May 2012 Russian Open Skies Antonov-30 caught fire during an emergency landing at an airport outside the Czech city of Caslav. According to unconfirmed reports, the accident occurred because the crew was unable to extend the landing gear. Seven passengers were injured, out of 14 Russian and 9 Czech citizens on board.[12]

An-24FK
The sole prototype converted from an An-24B with a navigators station in an extensively glazed nose and elevated cockpit to give clearance for mission equipment.

An-30A
Version designed for civilian aviation. 65 were delivered to the Soviet Ministry of Civil Aviation, 6 to other Soviet civil organisations. 18 An-30As were built for export, 7 of which were delivered to China.[13]

An-30B
Version designed for the Soviet Air Force. 26 built. Main differences from An-30A was the avionics fit. Most An-30Bs were retro-fitted with chaff/flare dispensers.[14]

An-30D Sibiryak
Long range version of the An-30A with increased fuel capacity, developed in 1990. 5 aircraft were converted to An-30Ds. All were based at Myachkovo airfield near Moscow. This variant was used for ice monitoring, fisheries monitoring and as a transport aircraft. It had improved communication equipment, including a data-link system. Rescue equipment was also carried on board.[15]

An-30FG
Czech designation for the single Czech Air Force An-30, after being retro-fitted with a western weather radar.[15]

An-30M Meteozashchita
Version equipped for weather research. It can spray dry ice into the atmosphere for weather control duties. The dry ice was stored in 8 containers per 130 kg instead of the photographic equipment.

An-30R
A production An-30 CCCP-30055/RA-30055(c/n1101) converted to a NBC reconnaissance aircraft with air sampling pods under the forward fuselage and other sensors for monitoring nuclear, biological and chemical warfare by-products. A second example, 30080, was acquired by the VVS, differing in having only one sampling pod on the port pylon and provision for dropping large flare bombs from the starboard pylon. An-30R RA-30055 was used for monitoring the plume from the Chernobyl No.4 nuclear reactor fire and became permanently radio-active in the process, being withdrawn from use immediately afterwards. 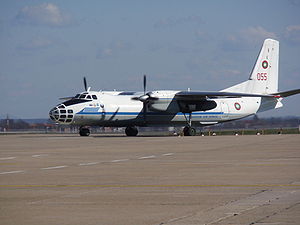 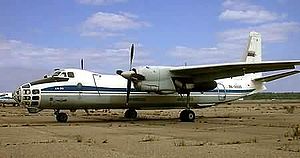 Avionics
5 positions for large cameras. Other survey equipment can be fitted.