The Antonov An-72 (NATO reporting name Coaler) is a Soviet transport aircraft, developed by Antonov. It was designed as a STOL transport and intended as a replacement for the Antonov An-26, but variants have found success as commercial freighters.

The An-72 and An-74 get their nickname, Cheburashka, from the large engine intake ducts, which resemble the oversized ears of the popular Soviet animated character of the same name. Nickname Galya (Galina - the popular Ukrainian female name) is also known.

The An-72 first flew in December 1977 (1977-12).[1] Produced in tandem with the An-72, the An-74 variant adds the ability to operate in harsh weather conditions in polar regions, because it can be fitted with wheel-skis landing gear, de-icing equipment and a number of other upgrades allowing the aircraft to support operations in Arctic or Antarctic environments. Other An-72 versions include the An-72S VIP transport and An-72P maritime patrol aircraft.

An unusual design feature of the An-72 is the use of the Coandă effect to improve STOL performance, utilizing engine exhaust gases blown over the wing's upper surface to boost lift. The first flight was made on 31 August 1977, but it was only in the 1980s that production started. The power plant used is the Lotarev D-36 turbofan engine.[2] The An-72 bears a resemblance to the Boeing YC-14,[1] a prototype design from the early 1970s (design submitted to the Air Force in February 1972[3]) which had also used overwing engines and the Coandă effect.

The rear fuselage of the aircraft has a hinged loading ramp with a rear fairing that slides backwards and up to clear the opening. Up to 7.5 tons can be airdropped whilst there are folding side seats for 52 passengers.

The An-72 has STOL capabilities: its takeoff roll is 620 metres and its landing run is 420 metres.[4] This aircraft was designed to be used on unprepared surfaces: its robust undercarriage and high-flotation tyres allow operations on sand, grass or other unpaved surfaces. 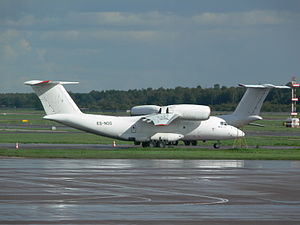 In August 2006, a total of 51 An-72 and Antonov An-74 aircraft remain in airline service. Major operators include Badr Airlines (three), Air Armenia (three), Enimex (five), Gazpromavia (12), and Shar Ink (eight). Some 17 other airlines operate smaller numbers of the type.[6] 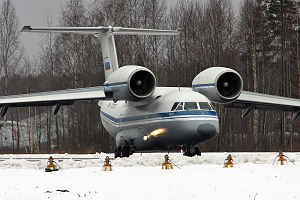 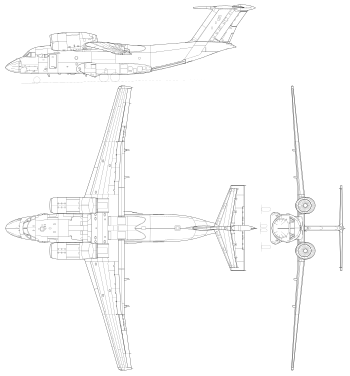 Data from The Osprey Encyclopaedia of Russian Aircraft 1875–1995