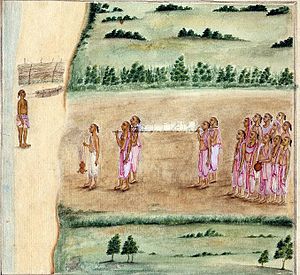 An 1820 painting showing a Hindu funeral procession in south India. The pyre is to the left, near a river, the lead mourner is walking in front, the dead body is wrapped in white and is being carried to the cremation pyre, relatives and friends follow.[1]

Antyesti (IAST: Antyeṣṭi, Sanskrit: अन्त्येष्टि) literally means "last sacrifice", and refers to the funeral rites for the dead in Hinduism.[2] This rite of passage is one of traditional Saṃskāras in the life of a Hindu.[3] It is also referred to as Antima Sanskar, Antya-kriya, Anvarohanyya, or as Vahni Sanskara.[2]

The details of the Antyesti ceremony depends on the region, caste, gender and age of the dead.[4] A dead adult is typically cremated, while a dead child below the age of puberty is typically buried.[5][6]

Antyeṣṭi (अन्त्येष्टि) is a composite Sanskrit word of antya and iṣṭi, which respectively mean "last" and "sacrifice".[7] Together, the word means the "last sacrifice". Similarly, the phrase Antima Sanskara literally means "last sacred ceremony, or last rite of passage".[8] 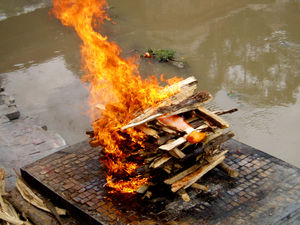 A Hindu cremation rite in Nepal. The samskara above shows the body wrapped in saffron on a pyre.

The Antyesti rite of passage is structured around the premise in ancient literature of Hinduism that the microcosm of all living beings is a reflection of a macrocosm of the universe.[9] The soul (Atman, Brahman) is the essence and immortal that is released at the Antyeshti ritual, but both the body and the universe are vehicles and transitory in various schools of Hinduism. The human body and the universe consist of five elements in Hindu texts – air, water, fire, earth and space.[9] The last rite of passage returns the body to the five elements and its origins.[5][9] The roots of this belief are found in the Vedas, for example in the hymns of Rigveda in section 10.16, as follows,

Burn him not up, nor quite consume him, Agni: let not his body or his skin be scattered,
O all possessing Fire, when thou hast matured him, then send him on his way unto the Fathers.
When thou hast made him ready, all possessing Fire, then do thou give him over to the Fathers,
When he attains unto the life that waits him, he shall become subject to the will of gods.
The Sun receive thine eye, the Wind thy Prana (life-principle, breathe); go, as thy merit is, to earth or heaven.
Go, if it be thy lot, unto the waters; go, make thine home in plants with all thy members.

The final rites of a burial, in case of untimely death of a child, is rooted in Rig Veda's section 10.18, where the hymns mourn the death of the child, praying to deity Mrityu to "neither harm our girls nor our boys", and pleads the earth to cover, protect the deceased child as a soft wool.[11]

A dead adult Hindu is mourned with a cremation, while a dead child is typically buried.[5] The last rites are usually completed within a day of death. His or her body is washed, wrapped in white cloth if the dead is a man or a widow (red if her husband is still alive),[6] the two toes tied together with a string, a Tilak (red mark) placed on the forehead.[5] The dead adult's body is carried to the cremation ground near a river or water, by family and friends, and placed on a pyre with feet facing south.[6]

The eldest son, or a male mourner, or a priest – called the lead cremator or lead mourner – then bathes himself before leading the cremation ceremonial function.[5][12] He circumambulates the dry wood pyre with the body, says a eulogy or recites a hymn in some cases, places sesame seed or rice in the dead person's mouth, sprinkles the body and the pyre with ghee (clarified butter), then draws three lines signifying Yama (deity of the dead), Kala (time, deity of cremation) and the dead.[5] The pyre is then set ablaze, while the mourner's mourn. Once the pyre is well-ignited the lead cremator and the closest relatives may circumambulate the burning pyre one or more times. The concluding action by the lead cremator, during the ritual, typically includes kapala kriya, or the ritual of piercing the well-incinerated skull with a stave (bamboo fire poker) to make a hole or break it, so as to release the spirit.[13]

All those who attend the cremation, and are exposed to the dead body or cremation smoke take a shower, as soon as possible after the cremation, as the cremation ritual is considered in Hinduism as hygienically unclean and polluting.[14] The cold collected ash from the cremation is later consecrated to the nearest river or sea.[12]

In some regions, the male relatives of the deceased shave their head and invite all friends and relatives, on the tenth or twelfth day, to eat a simple meal together in remembrance of the deceased. This day, in some communities, also marks a day when the poor and needy are offered food in memory of the dead.[15]

The cremation ground is called Shmashana (in Sanskrit), and traditionally it is located near a river, if not on the river bank itself. Those who can afford it may go to special sacred places like Kashi (Varanasi), Haridwar, Allahabad, Sri Rangam, Brahmaputra on the occasion of Ashokastami and Rameswaram to complete this rite of immersion of ashes into water.[16] 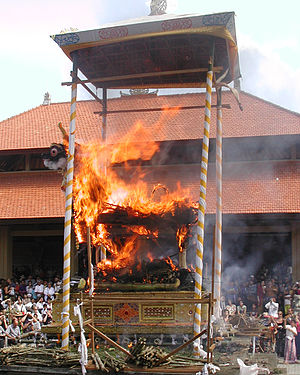 Cremation of the dead by Hindus in Ubud, Bali Indonesia.

Both manual bamboo wood pyres and electric cremation are used for Hindu cremations.[17] For the latter, the body is kept on a bamboo frame on rails near the door of the electric chamber.[18] After cremation, the mourner collect the ashes and consecrate it to a water body, such as a river or sea.

Discrimination in the colonial era

Hindus brought into Trinidad as indentured laborers for plantations between 1845 to 1917, by the British colonial government, suffered discriminatory laws that did not allow cremation, and other rites of passage such as the traditional marriage, because the colonial officials considered these as pagan and uncivilized barbaric practices. The non-Hindu government further did not allow the construction of crematorium.[19] After decades of social organization and petitions, the Hindus of Trinidad gained the permission to practice their traditional rites of passage including Antyesti in the 1950s, and build the first crematorium in 1980s.[19]

In the United Kingdom, it was formerly illegal to conduct a traditional outdoors Hindu cremation under the 1902 Cremation Act, with Hindus having to cremate their dead in indoor crematoriums instead. In 2006, Daven Ghai, a British Hindu who had been refused the right to have a traditional funeral by Newcastle City Council, brought a case to court in which he claimed that the current law did in fact allow open air cremations, so long as they were in some enclosed building and away from the public.[20] A High Court ruling disagreed with his claim, and the-then Justice Secretary Jack Straw stated that the British public would "find it abhorrent that human remains were being burned in this way." Nonetheless, upon taking it to the Court of Appeals in 2010, the judge, Lord Justice Neuberger, ruled that such a cremation would be legal under the 1902 Act, so long as it was performed within a building, even an open-air one.[20] Upon his victory, Ghai told reporters that "I always maintained that I wanted to clarify the law, not disobey or disrespect it" and expressed regret at the amount that the trial had cost the taxpayer.[20] He stated that he was thankful that he now had "the right to be cremated with the sun shining on my body and my son lighting the pyre" and he and other Hindus and Sikhs in the country had begun investigations into finding a site upon which they could perform the funerary ceremonies.[21]