Arab (or Arap) Shamilov (Kurdish: Erebê Şemo‎, also Ereb Shemo) (23 October 1897 – 1978) was a Kurdish novelist who lived in the Soviet Union. He was born in the city of Kars in present-day north-eastern Turkey (Turkish Kurdistan).

During the World War I, from 1914 to 1917, he served as an interpreter for the Russian army. Later on, he became a member of the central committee of the Armenian Communist Party. In 1931, he began working on Kurdish literature at the Leningrad Institute of Oriental Studies. He assisted in developing a Latin-based alphabet for the Kurdish language in 1927.[1]

He became a member of the editorial board of the Kurdish newspaper Riya Teze (The New Path), published in Yerevan from 1930 to 1937. In Leningrad, he also met the Kurdish linguist Qenatê Kurdo and published his work as a document about Kurdish language in Armenia.

His first and most celebrated novel, The Kurdish Shepherd (Şivanê Kurd), based on his own life,[1] was published in 1935 (in Russian only after serious censorial edits) and later translated into Italian as Il pastore curdo. In 1937, he was exiled by Joseph Stalin and was only allowed to return to Armenia after 19 years, in 1956, following Stalin's death. 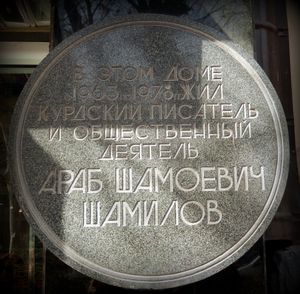 In 1959, he published his first Kurdish novel, Jiyana Bextewer. In 1966, he published a historical novel, Dimdim, inspired by the old Kurdish folk tale of Kela Dimdimê about Dimdim Castle. It has been translated into Italian as well (as Il castello di Dimdim). In 1967, he published a collection of Kurdish folk stories in Moscow.