The Arabic script is an impure abjad, where short consonants and long vowels are represented by letters but short vowels and consonant length are not generally indicated in writing. Tashkīl is optional to represent missing vowels and consonant length. Modern Arabic is nearly always written with consonant pointing, but occasionally unpointed texts are still seen. Early texts such as the Qur'an were initially written without pointing, and pointing was added later to determine the expected readings and interpretations.

The literal meaning of tashkīl is 'forming'. As the normal Arabic text does not provide enough information about the correct pronunciation, the main purpose of tashkīl (and ḥarakāt) is to provide a phonetic guide or a phonetic aid; i.e. show the correct pronunciation. It serves the same purpose as furigana (also called "ruby") in Japanese or pinyin or zhuyin in Mandarin Chinese for children who are learning to read or foreign learners.

The bulk of Arabic script is written without ḥarakāt (or short vowels). However, they are commonly used in some religious texts that demand strict adherence to pronunciation rules such as Qur'an ⟨الْقُرْآن⟩ (al-Qur’ān). It is not uncommon to add ḥarakāt to hadiths ⟨الْحَدِيث⟩ (al-ḥadīth; plural: aḥādīth) as well. Another use is in children's literature. Harakat are also used in ordinary texts when an ambiguity of pronunciation might arise. Arabic dictionaries with the vowels marked provide information about the correct pronunciation to both native and foreign Arabic speakers.

Short vowels can be included in cases where readers could not easily resolve word ambiguity from context alone or simply wherever their writing might be considered aesthetically pleasing.

An example of a fully vocalised (vowelised or vowelled) Arabic from the Basmala:

Some Arabic textbooks for foreigners now use ḥarakāt as a phonetic guide to make learning reading Arabic easier. The other method used in textbooks is phonetic romanisation of unvocalised texts. Fully vocalised Arabic texts (i.e. Arabic texts with ḥarakāt/diacritics) are sought after by learners of Arabic. Some online bilingual dictionaries also provide ḥarakāt as a phonetic guide similarly to English dictionaries providing transcription.

The ḥarakāt, which literally means 'motions', are the short vowel marks. There is some ambiguity as to which tashkīl are also ḥarakāt; the tanwīn, for example, are markers for both vowels and consonants.

The fatḥah ⟨فَتْحَة⟩ is a small diagonal line placed above a letter, and represents a short /a/. The word fatḥah itself (فَتْحَة) means opening and refers to the opening of the mouth when producing an /a/. For example, with dāl (henceforth, the base consonant in the following examples): ⟨دَ⟩ /da/.

A similar diagonal line below a letter is called a kasrah ⟨كَسْرَة⟩ and designates a short /i/ (as in "Tim"). For example: ⟨دِ⟩ /di/.[1]

When a kasrah is placed before the letter ⟨ﻱ⟩ (yā’), it represents a long /iː/ (as in the English word "steed"). For example: ⟨دِي⟩ /diː/. The kasrah is usually not written in such cases, but if yā’ is pronounced as a diphthong /eɪ/, fatḥah should be written on the preceding consonant to avoid mispronunciation.The word kasrah means 'breaking'.

The ḍammah ⟨ضَمَّة⟩ is a small curl-like diacritic placed above a letter to represent a short /u/. For example: ⟨دُ⟩ /du/.[2]

When a ḍammah is placed before the letter ⟨و⟩ (wāw), it represents a long /uː/ (as in the English word "blue"). For example: ⟨دُو⟩ /duː/. The ḍammah is usually not written in such cases, but if wāw is pronounced as a diphthong /aw/, fatḥah should be written on the preceding consonant to avoid mispronunciation.

The maddah ⟨مَدَّة⟩ is a tilde-like diacritic, which can appear mostly on top of an alif and indicates a glottal stop /ʔ/ followed by a long /aː/.

In theory, the same sequence /ʔaː/ could also be represented by two alifs, as in *⟨أَا⟩, where a hamza above the first alif represents the /ʔ/ while the second alif represents the /aː/. However, consecutive alifs are never used in the Arabic orthography. Instead, this sequence must always be written as a single alif with a maddah above it, the combination known as an alif maddah. For example: ⟨قُرْآن⟩ /qurˈʔaːn/.

Madda can also appear above waw and ya.

The superscript (or dagger) alif ⟨أَلِف خَنْجَرِيَّة⟩ (alif khanjarīyah), is written as short vertical stroke on top of a consonant. It indicates a long /aː/ sound for which alif is normally not written. For example: ⟨هٰذَا⟩ (hādhā) or ⟨رَحْمٰن⟩ (raḥmān).

The dagger alif occurs in only a few words, but they include some common ones; it is seldom written, however, even in fully vocalised texts. Most keyboards do not have dagger alif. The word Allah ⟨الله⟩ (Allāh) is usually produced automatically by entering alif lām lām hāʾ. The word consists of alif + ligature of doubled lām with a shaddah and a dagger alif above lām.

It occurs only in the beginning of words, but it can occur after prepositions and the definite article. It is commonly found in imperative verbs, the perfective aspect of verb stems VII to X and their verbal nouns (maṣdar). The alif of the definite article is considered a waṣlah.

It occurs in phrases and sentences (connected speech, not isolated/dictionary forms):

The sukūn ⟨سُكُون⟩ is a circle-shaped diacritic placed above a letter. It indicates that the consonant to which it is attached is not followed by a vowel.

It is a necessary symbol for writing consonant-vowel-consonant syllables, which are very common in Arabic. For example: ⟨دَدْ⟩ (dad).

The three vowel diacritics may be doubled at the end of a word to indicate that the vowel is followed by the consonant n. They may or may not be considered ḥarakāt and are known as tanwīn ⟨تَنْوِين⟩, or nunation. The signs indicate, from right to left, -un, -in, -an.

These endings are used as non-pausal grammatical indefinite case endings in literary Arabic or classical Arabic (triptotes only). In a vocalised text, they may be written even if they are not pronounced (see pausa). See i‘rāb for more details. In many spoken Arabic dialects, the endings are absent. Many Arabic textbooks introduce standard Arabic without these endings. The grammatical endings may not be written in some vocalized Arabic texts, as knowledge of i‘rāb varies from country to country, and there is a trend towards simplifying Arabic grammar.

The sign ⟨ـً⟩ is most commonly written in combination with ⟨ـًا⟩ (alif), ⟨ةً⟩ (tā’ marbūṭah) or stand-alone ⟨ءً⟩ (hamzah). Alif should always be written (except for words ending in tā’ marbūṭah, hamzah or diptotes) even if an is not. Grammatical cases and tanwīn endings in indefinite triptote forms:

The shadda or shaddah ⟨شَدَّة⟩ (shaddah), or tashdid ⟨تَشْدِيد⟩ (tashdīd), is a diacritic shaped like a small written Latin "w".

It is used to indicate gemination (consonant doubling or extra length), which is phonemic in Arabic. It is written above the consonant which is to be doubled. It is the only ḥarakah that is sometimes used in ordinary spelling to avoid ambiguity. For example: ⟨دّ⟩ /dd/; madrasah ⟨مَدْرَسَة⟩ ('school') vs. mudarrisah ⟨مُدَرِّسَة⟩ ('teacher', female). 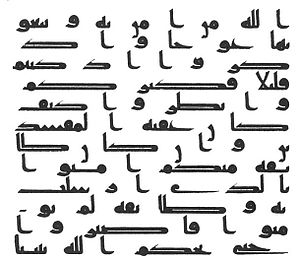 The ijam ⟨إِعْجَام⟩ (i‘jām) are the pointing diacritics that distinguish various consonants that have the same form (rasm), such as ⟨ـبـ⟩ /b/, ⟨ـتـ⟩ /t/, ⟨ـثـ⟩ /θ/, ⟨ـنـ⟩ /n/, and ⟨ـيـ⟩ /j/. Typically ijam are not considered diacritics but part of the letter.

Early manuscripts of the Qur’ān did not use diacritics either for vowels or to distinguish the different values of the rasm. Vowel pointing was introduced first, as a red dot placed above, below, or beside the rasm, and later consonant pointing was introduced, as thin, short black single or multiple dashes placed above or below the rasm (image). These i‘jām became black dots about the same time as the ḥarakāt became small black letters or strokes.

Typically, Egyptians do not use dots under final yā’ ⟨ي⟩, both in handwriting and in print, as alif maqṣūrah ⟨ى⟩. This practice is also used in copies of the muṣḥaf (Qurʾān) scribed by ‘Uthman Ṭāhā. The same unification of yā and alif maqṣūrā has happened in Persian, resulting in what the Unicode Standard calls "arabic letter farsi yeh", that looks exactly the same as yā in initial and medial forms, but exactly the same as alif maqṣūrah in final and isolated forms ⟨یـ  ـیـ  ـی⟩.

Which letter is to be used to support the hamzah depends on the quality of the adjacent vowels;

Consider the following words: ⟨أَخ⟩ /ʔax/ ("brother"), ⟨إِسْرَائِيل⟩ /ʔisraːʔiːl/ ("Israel"), ⟨أُمّ⟩ /ʔumm/ ("mother"). All three of above words "begin" with a vowel opening the syllable, and in each case, alif is used to designate the initial glottal stop (the actual beginning). But if we consider middle syllables "beginning" with a vowel: ⟨نَشْأَة⟩ /naʃʔa/ ("origin"), ⟨إِسْرَائِيل⟩ /ʔisraːʔiːl/ ("Israel" — notice the /ʔiːl/ syllable), ⟨رُؤُوس⟩ /ruʔuːs/ ("heads", singular ⟨رَأْس⟩ /raʔs/), the situation is different, as noted above. See the comprehensive article on hamzah for more details. 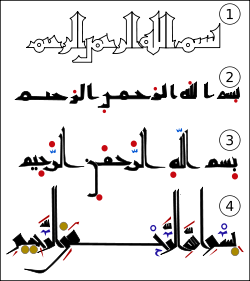 According to tradition, the first to commission a system of harakat was Muawiyah I of the Umayyad dynasty, when he ordered Ziad Ibn Abih, his wālī in Basra (governed 664–673), to find someone who would devise a method to transcribe correct reading. Ziad Ibn Abih, in turn, appointed Abu al-Aswad al-Du'ali for the task. Abu al-Aswad devised a system of dots to signal the three short vowels (along with their respective allophones) of Arabic. This system of dots predates the i‘jām, dots used to distinguish between different consonants.

Abu al-Aswad's system of Harakat was different from the system we know today. The system used red dots with each arrangement or position indicating a different short vowel.

However, the early manuscripts of the Qur'an did not use the vowel signs for every letter requiring them, but only for letters where they were necessary for a correct reading.

This is the precursor to the system we know today. al-Farāhīdī found that the task of writing using two different colours was tedious and impractical. Another complication was that the i‘jām had been introduced by then, which, while they were short strokes rather than the round dots seen today, meant that without a color distinction the two could become confused.

Accordingly, he replaced the ḥarakāt with small superscript letters: small alif, yā’, and wāw for the short vowels corresponding to the long vowels written with those letters, a small s(h)īn for shaddah (geminate), a small khā’ for khafīf (short consonant; no longer used). His system is essentially the one we know today.[3]