The ancient Aramaic alphabet is adapted from the Phoenician alphabet and became distinctive from it by the 8th century BCE. It was used to write the Aramaic language, and had displaced the Paleo-Hebrew alphabet for the writing of Hebrew. The letters all represent consonants, some of which are matres lectionis, which also indicate long vowels.

The Aramaic alphabet is historically significant, since virtually all modern Middle Eastern writing systems can be traced back to it, as well as numerous non-Chinese writing systems of Central and East Asia. This is primarily due to the widespread usage of the Aramaic language as both a lingua franca and the official language of the Neo-Assyrian Empire, and its successor, the Achaemenid Empire. Among the scripts in modern use, the Hebrew alphabet bears the closest relation to the Imperial Aramaic script of the 5th century BC, with an identical letter inventory and, for the most part, nearly identical letter shapes.

Writing systems that indicate consonants but do not indicate most vowels (like the Aramaic one) or indicate them with added diacritical signs, have been called abjads by Peter T. Daniels to distinguish them from later alphabets, such as Greek, that represent vowels more systematically. This is to avoid the notion that a writing system that represents sounds must be either a syllabary or an alphabet, which implies that a system like Aramaic must be either a syllabary (as argued by Ignace Gelb) or an incomplete or deficient alphabet (as most other writers have said); rather, it is a different type. 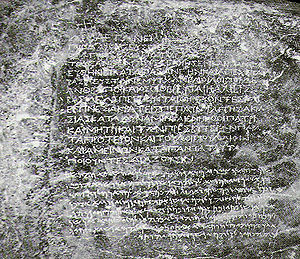 Bilingual Greek and Aramaic inscription by the Mauryan emperor Ashoka the Great at Kandahar, Afghanistan, 3rd century BC

The earliest inscriptions in the Aramaic language use the Phoenician alphabet.[1] Over time, the alphabet developed into the form shown below. Aramaic gradually became the lingua franca throughout the Middle East, with the script at first complementing and then displacing Assyrian cuneiform as the predominant writing system.

Around 500 BC, following the Persian Achaemenid conquest of Mesopotamia under Darius I, Old Aramaic was adopted by the conquerors as the "vehicle for written communication between the different regions of the vast empire with its different peoples and languages. The use of a single official language, which modern scholarship has dubbed Official Aramaic or Imperial Aramaic, can be assumed to have greatly contributed to the astonishing success of the Achaemenids in holding their far-flung empire together for as long as they did."[2]

Imperial Aramaic was highly standardised; its orthography was based more on historical roots than any spoken dialect and was inevitably influenced by Old Persian. The Aramaic glyph forms of this period are often divided into two main styles, the "lapidary" form, usually inscribed on hard surfaces like stone monuments, and a cursive form, of which the lapidary form tended to be more conservative (remaining more visually similar to Phoenician and early Aramaic). Both were in use through the Achaemenid period, though the cursive form steadily gained ground over the lapidary, which had largely disappeared by the 3rd century BC.[3]

For centuries after the fall of the Achaemenid Empire in 331 BC, Imperial Aramaic—or near enough for it to be recognisable—would remain an influence on the various native Iranian languages. The Aramaic script would survive as the essential characteristics of the Pahlavi writing system.[4]

A group of thirty Aramaic documents from Bactria has been recently discovered. An analysis was published in November 2006. The texts, which were rendered on leather, reflect the use of Aramaic in the 4th century BC the Persian Achaemenid administration of Bactria and Sogdiana.[5]

Its widespread usage led to the gradual adoption of the Aramaic alphabet for writing the Hebrew language. Formerly, Hebrew had been written using an alphabet closer in form to that of Phoenician (the Paleo-Hebrew alphabet).

Since the evolution of the Aramaic alphabet out of the Phoenician one was a gradual process, the division of the world's alphabets into those derived from the Phoenician one directly and those derived from Phoenician via Aramaic is somewhat artificial. In general, the alphabets of the Mediterranean region (Anatolia, Greece, Italy) are classified as Phoenician-derived, adapted from around the 8th century BCE, while those of the East (the Levant, Persia, Central Asia and India) are considered Aramaic-derived, adapted from around the 6th century BCE from the Imperial Aramaic script of the Achaemenid Empire.

After the fall of the Achaemenid Empire, the unity of the Imperial Aramaic script was lost, diversifying into a number of descendant cursives.

The Hebrew and Nabataean alphabets, as they stood by the Roman era, were little changed in style from the Imperial Aramaic alphabet.

A Cursive Hebrew variant developed from the early centuries AD, but it remained restricted to the status of a variant used alongside the non-cursive. By contrast, the cursive developed out of the Nabataean alphabet in the same period soon became the standard for writing Arabic, evolving into the Arabic alphabet as it stood by the time of the early spread of Islam.

The development of cursive versions of Aramaic also led to the creation of the Syriac, Palmyrene and Mandaic alphabets. These scripts formed the basis of the historical scripts of Central Asia, such as the Sogdian and Mongolian alphabets.

It has been suggested[who?] that the Old Turkic script in 8th century epigraphy originated in the Aramaic script.

Aramaic is also considered to be the most likely source of the Brahmi script, ancestor of the Brahmic family of scripts, which includes Devanagari.

In malula the Arameans started a program to give there language a writen abjad they User the Aramaic alphabet But the program ran into trouble recently, when a Syrian newspaper suggested that the alphabet being used to teach written Aramaic bore an uncanny resemblance to the Hebrew characters found in modern-day Israel. Worried that a flagship heritage scheme might in any way be associated with the country’s neighboring enemy, the government-run University of Damascus, which established the institute, acted quickly to freeze the Aramaic program. So they started to use the Syriac alphabet (serto).[1]

The letters Waw and Yudh, put following the consonants that were followed by the vowels u and i (and often also o and e), are used to indicate the long vowels û and î respectively (often also ô and ê respectively). These letters, which stand for both consonant and vowel sounds, are known as matres lectionis. The letter Alaph, likewise, had some of the characteristics of a mater lectionis: in initial positions, it indicated a specific consonant called glottal stop (followed by a vowel), and, in the middle of the word and word finally, it often also stood for the long vowels â or ê. Among Jews, influence of Hebrew spelling often led to the use of He instead of Alaph in word final positions. The practice of using certain letters to hold vowel values spread to child writing systems of Aramaic, such as Arabic and Hebrew, where they are still used today.

The Syriac Aramaic alphabet was added to the Unicode Standard in September 1999 with the release of version 3.0.

The Imperial Aramaic alphabet was added to the Unicode Standard in October 2009 with the release of version 5.2.