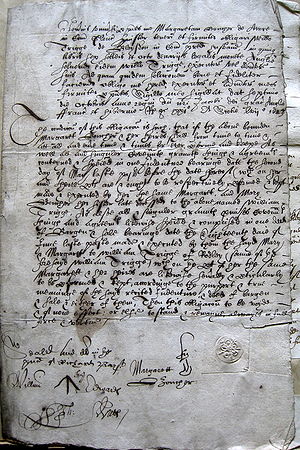 Bond dated 1623, written in secretary hand, in a combination of Latin and English, and in technical legal terminology.

Archival research is a type of primary research which involves seeking out and extracting evidence from original archival records. These records may be held either in institutional archive repositories, or in the custody of the organisation (whether a government body, business, family, or other agency) that originally generated or accumulated them, or in that of a successor body. Archival research can be contrasted with (1) secondary research (undertaken in a library or online), which involves identifying and consulting secondary sources relating to the topic of enquiry; and (2) with other types of primary research and empirical investigation such as fieldwork and experiment.

Archival research is generally more complex and time-consuming than library and internet research, presenting challenges in identifying, locating and interpreting relevant documents. Archival records are often unique, and the researcher must be prepared to travel to reach them. Some finding aids to archival documents are hosted online, but many more are not, and some records lack any kind of finding aid at all. Although most archive repositories welcome researchers, and have professional staff tasked with assisting them, the sheer quantity of records means that finding aids may be of only limited usefulness: the researcher will need to hunt through large quantities of documents in search of material relevant to his or her particular enquiry. Some records may be closed to public access for reasons of confidentiality; and others may be written in archaic handwriting, in ancient or foreign languages, or in technical terminology. Archival documents were generally created for immediate practical or administrative purposes, not for the benefit of future researchers, and additional contextual research may be necessary to make sense of them. Many of these challenges are exacerbated when the records are still in the custody of the generating body or in private hands, where owners or custodians may be unwilling to provide access to external enquirers, and where finding aids may be even more rudimentary or non-existent.

Archival research lies at the heart of most academic and other forms of original historical research; but it is frequently also undertaken (in conjunction with parallel research methodologies) in other disciplines within the humanities and social sciences, including literary studies, archaeology, sociology, human geography, anthropology, and psychology. It may also be important in other non-academic types of enquiry, such as the tracing of birth families by adoptees, and criminal investigations.

The oldest archives have been in existence for hundreds of years. For instance, the Vatican Secret Archives was started in the 17th century AD and contains state papers, papal account books, and papal correspondence dating back to the 8th century. Most archives that are still in existence do not claim collections that date back quite as far as the Vatican Archive.

However, many national archives were established over one hundred years ago and contain collections going back three or four hundred years ago. The United States National Archives and Records Administration was established originally in 1934.[1] The NARA contains records and collections dating back to the founding of the United States in the 18th century. Among the collections of the NARA are the Declaration of Independence, the Constitution of the United States, and an original copy of the Magna Carta. Similarly, the Archives nationales in France was founded in 1790 during the French Revolution and has holdings that date back to AD 625.

Universities are another historic venue for archival holdings. Most universities have archival holdings that chronicle the business of the university. Some universities also have cultural archives that focus on one aspect or another of the culture of the state or country in which the university is located. The University of North Carolina at Chapel Hill has archival collections on the subjects of Southern History and Southern Folklife.[2] Boston University's Howard Gottlieb Archival Research Library has collections dedicated to chronicling advances and famous moments in American art, drama, and public/ political life.[3]

The reason for highlighting the breadth and depth of historical archives is to give some idea of the difficulties facing archival researchers in the pre-digital age. Some of these archives were dauntingly vast in the amount of records they held. For example, The Vatican Secret Archive had upwards of 52 miles of archival shelving. In an age where you could not simply enter your query into a search bar complete with Boolean operators the task of finding material that pertained to your topic would have been difficult at the least. The Finding aid made the work of sifting through these vast archives much more manageable.[4] A finding aid is a document that is put together by an archivist or librarian that contains information about the individual documents in a specific collection in an archive. These documents can be used to determine if the collection is relevant to a designated topic. Finding aids made it so a researcher did not have to blindly search through collection after collection hoping to find pertinent information. However, in the pre-digital age a researcher still had to travel to the physical location of the archive and search through a card catalog of finding aids.

Organizing, collecting, and archiving information using physical documents without the use of electronics is a daunting task. Magnetic storage devices provided the first means of storing electronic data. As technology has progressed over the years, so too has the ability to archive data using electronics. Long before the Internet, means of using technology to help archive information were in the works. The early forms of magnetic storage devices that would later be used to archive information were invented as early as the late 19th century, but were not used for organizing information until 1951 with the invention of the UNIVAC I.

UNIVAC I, which stands for Universal Automatic Computer 1, used magnetic tape to store data, and was the first commercial computer produced in the United States. Early computers such as UNIVAC I were enormous and sometimes took up entire rooms, rendering them completely obsolete in today's technological society. But the central idea of using magnetic tape to store information is a concept that is still in use today.

Magnetic tape has proven to be a very effective means of archiving data as large amounts of data that don’t need to be quickly accessed can be found on magnetic tape. That is especially true of aging data that may not need to be accessed again at all, but for different reasons still needs to be stored “just in case”.[5]

With the development of the Internet in recent decades, archiving has begun to make its way online. The days of using electronic devices such as magnetic tape are coming to an end as people start to use the internet to archive their information.

Internet archiving has become extremely popular for several reasons. As mentioned earlier, the attempt to have as much information take up as little space as possible is very helpful for many archivers. Using the Internet to archive allows for this to be possible as well as many other benefits. Internet archiving can be used to store as little information needed for a single person, or for as much information needed for a major company. Internet archives can contain large-scale digitization as well as provide long term management and preservation of the digital resources similar to the electronics used in the pre-Internet data storage era. Along with the idea of storage benefits, archiving via Internet ensures that ones information is safe. There is risk of misplacing your information, or having it get destroyed by water or fire etc. Those are problems that may occur when archiving using floppy discs, hard drives, and computers. Lastly, the ability to access the information from almost anywhere is one of the main attractions to online archiving. As long as one has access to the Internet they can edit and retrieve the information they are looking for.

In February 1997, key figures from the academic, archival, corporate, government, legal, and technology communities came together for the first time at a groundbreaking conference in San Francisco. The conference, “Documenting the Digital Age,” was sponsored by the National Science Foundation, MCI Communications Corporation, Microsoft Corporation, and History Associates Incorporated, and was a special initiative to discuss the preservation of electronic records.[7]

October is officially noticed throughout the United States as American Archives month, with both Ireland and the United Kingdom noticing the event as well. The month was founded in 1969 by the Michigan State University Archives & Historical Collections, but now Archives Month is a collaborative effort by professional organizations and repositories. Their main point of American Archives month was and is to celebrate the importance of archives and to raise awareness about the value of archives. Lessons of how to preserve certain photographs and documents are also provided for each state. Each state normally celebrates the affair through a series of week-long events.[8] The majority of the states get involved and plan out different sorts of activities that pertain to archiving.[9] There is also a guide that goes into detail about planning for the event. For the most part, each state coins a phrase each year to describe their interest in archiving. For example:

Wisconsin was the most recent state to join National Archive Month, joining in 2009, coining the phrase "Scrapbook Wisconsin." One of the major events is hosted by the staff at the University Archives & Historical Collections. They contribute to American Archives Month by hosting a contest about trivia questions pertaining to archives, but it is only open to MSU faculty, staff and students, MSU alumni, and the greater Lansing community.

National Archives and Records Administration [1] Trace Your Birth Family In The UK http://www.ukadoptionregister.org