From Infogalactic: the planetary knowledge core
Jump to: navigation, search
For the supernatural being in Gnostic cosmology, see Archon (Gnosticism).
For other uses, see Archon (disambiguation). 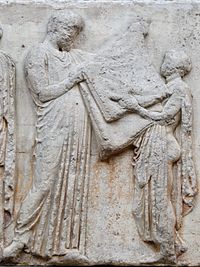 Depiction from the east frieze of the Parthenon, of an assumed Archon Basileus, a remnant title of the Greek monarchy

Archon (Greek ἄρχων arkhon; pl. ἄρχοντες) is a Greek word that means "ruler" or "lord," frequently used as the title of a specific public office. It is the masculine present participle of the verb stem ἀρχ-, meaning "to rule," derived from the same root as monarch.

In ancient Greece the chief magistrate in various Greek city states was called Archon. The term was also used throughout Greek history in a more general sense, ranging from "club leader" to "master of the tables" at syssitia.[citation needed]

In Athens a republican system of nine concurrent Archons evolved, led by three respective remits over the civic, military, and religious affairs of the state: the three office holders being known as the Eponymos archon (Ἐπώνυμος ἄρχων; the "name" ruler, who gave his name to the year in which he held office), the Polemarch ("war ruler"), and the Archon Basileus ("king ruler").[1] The six others were the Thesmothétai, Judicial Officers. Originally these offices were filled from the wealthier classes by elections every ten years. During this period the eponymous Archon was the chief magistrate, the Polemarch was the head of the armed forces, and the Archon Basileus was responsible for some civic religious arrangements, and for the supervision of some major trials in the law courts. After 683 BC the offices were held for only a single year, and the year was named after the Archōn Epōnymos. (Many ancient calendar systems did not number their years consecutively.)

After 487 BC, the archonships were assigned by lot to any citizen and the Polemarch's military duties were taken over by new class of generals known as stratēgoí.[citation needed] The ten stratēgoí (one per tribe) were elected, and the office of Polemarch was rotated among them on a daily basis. The Polemarch thereafter had only minor religious duties, and the titular headship over the strategoi. The Archon Eponymos remained the titular head of state under democracy, though of much reduced political importance.[citation needed] The Archons were assisted by "junior" archons, called Thesmothétai (Θεσμοθέται "Institutors"). After 457 BC ex-archons were automatically enrolled as life members of the Areopagus, though that assembly was no longer extremely important politically at that time. (See Archons of Athens.)

Byzantine historians usually described foreign rulers as archontes.[2] The rulers of the Bulgars themselves, along with their own titles, often bear the title archon placed by God in inscriptions in Greek.

Inside Byzantium, the term could be used to refer to any powerful noble or magnate, but in a technical sense, it was applied to a class of provincial governors. In the 8th and 9th centuries, these were the governors of some of the more peripheral provinces, inferior in status to the themata: Dalmatia, Cephalonia, Crete and Cyprus. Archontes were also placed in charge of various naval bases and trade stations, as well as semi-autonomous Slavic-inhabited areas (sclaviniae) under Byzantine sovereignty. In the 10th–12th centuries, archontes are also mentioned as the governors of specific cities. The area of an archon's jurisdiction was called an archontia (ἀρχοντία).[3] The title was also used for the holders of several financial posts, such as the head of the mint (ἄρχων τῆς χαραγῆς), as well as directors the imperial workshops, arsenals, etc.[4]

The title of megas archon ("grand archon") is also attested, as a translation of foreign titles such as "grand prince". In the mid-13th century, it was established as a special court rank, held by the highest-ranking official of the emperor's company. It existed throughout the Palaiologan period, but did not have any specific functions.[5]

From time to time, laity of the Orthodox Church in communion with the Patriarch of Constantinople have been granted the title of Archon of the Ecumenical Patriarchate to honor their service to Church administration. In 1963, Archons were organized into a service society dedicated to St Andrew. This Archon status is not part of the Church hierarchy and is purely honorary.

An Archon is an honoree by His Beatitude the Ecumenical Patriarch, for his outstanding service to the Church, and a well-known, distinguished, and well-respected leader of the Orthodox Church (at large).

It is the sworn oath of the Archon to defend and promote the Orthodox Church faith and tradition. His main concern is to protect and promote the Holy Patriarchate and its mission. He is also concerned with human rights and the well-being and general welfare of the Church.

As it is a significant religious position, the faith and dedication of a candidate for the role are extensively reviewed during consideration; the candidate should have demonstrated commitment for the betterment of the Church, Parish-Diocese, Archdiocese and the community as a whole.