From Infogalactic: the planetary knowledge core
Jump to: navigation, search
This article is about self-contained, densely populated human habitations. For the study of human activity in the past, see Archaeology. 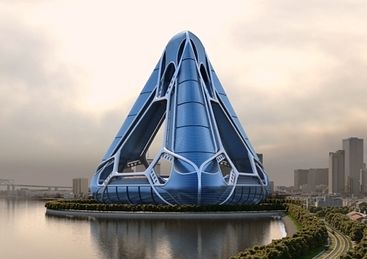 Arcology, a portmanteau of "architecture" and "ecology",[2] is a field of creating architectural design principles for very densely populated, ecologically low-impact human habitats.

The concept has been primarily popularized, and the term itself coined, by architect Paolo Soleri. It also appears in science fiction. Authors such as Peter Hamilton in Neutronium Alchemist or Paolo Bacigalupi in The Water Knife explicitly use arcologies as part of their scenarios. Arcologies are often portrayed in science fiction as self-contained or economically self-sufficient.

These structures have been largely hypothetical insofar as no arcology, even one envisioned by Soleri himself, has yet been completed, but he posited that a completed arcology would provide space for a variety of residential, commercial, and agricultural facilities while minimizing individual human environmental impact.

An arcology is distinguished from a merely large building in that it is designed to lessen the impact of human habitation on any given ecosystem. It could be self-sustainable, employing all or most of its own available resources for a comfortable life: power; climate control; food production; air and water conservation and purification; sewage treatment; etc. An arcology is designed to make it possible to supply those items for a large population. An arcology would supply and maintain its own municipal or urban infrastructures in order to operate and connect with other urban environments apart from its own.

Arcology was proposed to reduce human impact on natural resources. Arcology designs might apply conventional building and civil engineering techniques in very large but practical projects in order to achieve pedestrian economies of scale that have proven, post-automobile, to be difficult to achieve in other ways.

Frank Lloyd Wright proposed an early version[3] called Broadacre City although, in contrast to an arcology, Wright's idea is comparatively two-dimensional and depends on a road network. Wright's plan described transportation, agriculture, and commerce systems that would support an economy. Critics said that Wright's solution failed to account for population growth, and assumed a more rigid democracy than the U.S.A. actually has.

Buckminster Fuller proposed the Old Man River's City project, a domed city with a capacity of 125,000, as a solution to the housing problems in East St. Louis, Illinois.

Paolo Soleri proposed later solutions, and coined the term 'arcology'.[4] Soleri describes ways of compacting city structures in three dimensions to combat two-dimensional urban sprawl, to economize on transportation and other energy uses. Like Wright, Soleri proposed changes in transportation, agriculture, and commerce. Soleri explored reductions in resource consumption and duplication, land reclamation; he also proposed to eliminate most private transportation. He advocated for greater "frugality" and favored greater use of shared social resources, including public transit (and public libraries).

Arcosanti is an experimental "arcology prototype" – a demonstration project under construction in central Arizona. Designed by Paolo Soleri, its primary purpose is to demonstrate Soleri's personal designs, his application of principles of arcology to create a pedestrian-friendly urban form.

Many cities in the world have proposed projects adhering to the design principles of the arcology concept, like Tokyo, and Dongtan near Shanghai.[5] The Dongtan project may have collapsed, and it failed to open for the Shanghai World Expo in 2010.[6]

Certain urban projects reflect arcology principles. Pedestrian connection systems often provide a wide range of goods and services in a single structure. Some examples include the +15 system in downtown Calgary, Montréal's RÉSO, the Minneapolis Skyway System, The Windscreen in Fermont, Quebec, and the Houston, Texas tunnel system. They include supermarkets, malls and entertainment complexes. The +15 is the world's most extensive skywalk, at 16 km (9.9 mi) in total length. Minneapolis has the longest single path, at 13 km (8 mi). Seward's Success, Alaska was never built, but would have been a small city just outside Anchorage. Chicago has a sizeable tunnel system known as the Chicago Pedway connecting a portion of the buildings in the Chicago Loop.

The Las Vegas Strip has many arcology features to protect people from the 45 °C (113 °F) heat. Many major casinos are connected by tunnels, footbridges, and monorails. It is possible to travel from Mandalay Bay at the south end of the Strip to the Las Vegas Convention Center, three miles (5 km) to the north, without using streets. In many cases, it is possible to travel between several different casinos without ever going outdoors. It is possible to live in this complex without need to venture outside, except the Strip has not generally been considered self-sustainable. Soleri did not advocate for enclosed cities, although he did sketch a design and build a model of an 'arcology' for outer space.

The Toronto downtown area features an underground pedestrian network, PATH. Multiple high-rises are connected by a series of underground tunnels. It is possible to live in this complex without needing to venture outside, but the PATH network is not self-sustaining. The total network spans 28-kilometres (17 mi).

McMurdo Station of the United States Antarctic Program and other scientific research stations on the continent of Antarctica resemble the popular conception of an arcology as a technologically advanced, relatively self-sufficient human community. The Antarctic research base provides living and entertainment amenities for roughly 3,000 staff who visit each year. Its remoteness and the measures needed to protect its population from the harsh environment give it an insular character. The station is not self-sufficient – the U.S. military delivers 30,000 cubic metres (800,000 US gal) of fuel and 5 kilotonnes (11 million pounds) of supplies and equipment yearly through its Operation Deep Freeze resupply effort[7] – but it is isolated from conventional support networks. The base generates electricity with its own power plant, and grows fruits and vegetables in a hydroponic green house when resupply is non-existent. Under international treaty, it must avoid damage to the surrounding ecosystem.

Crystal Island is a proposed arcology in Moscow, Russia. In 2009, construction was postponed indefinitely due to the global economic crisis.

The Begich Towers operates like a small-scale arcology encompassing nearly all of the population of Whittier, Alaska. The pair of buildings contains residential housing as well as a school, grocery, and municipal offices. Whittier once boasted a second structure known as the Buckner Building. The Buckner Building still stands but was deemed unfit for habitation after the 1969 earthquake.[8]

Most proposals to build real arcologies have failed due to financial, structural or conceptual shortcomings. Arcologies are therefore found primarily in fictional works.[9] One significant example is the novel Oath of Fealty by Larry Niven and Jerry Pournelle. In the novel, a segment of the Los Angeles population has moved into an arcology. The plot examines the social changes that result, both inside and outside the arcology. Thus the arcology is presented not just as a plot device but as a subject of critique.[10] In Robert Silverberg's The World Inside, most of the global population of 750 billion lives inside giant skyscrapers, called "urbmons", each of which urbmon contains hundreds of thousands of people. The urbmons are arranged in "constellations". Each urbmon is divided into "neighborhoods" of 40 or so floors. All the needs of the inhabitants are provided inside the building – food is grown outside and brought into the building – so the idea of going outside is heretical and can be a sign of madness.[11] The book examines human life when the population density is extremely high.[12]

The Maxis computer game SimCity 2000 allows the construction of four different types of arcologies in the future.[13]

Usage of "arcology" vs. "hyperstructure"