The Arctic Circle defining the "midnight sun" encompasses the Atlantic Ocean from the northern edge of Iceland to the Bering Strait. The area is often considered part of the Battle of the Atlantic or the European Theatre of World War II. Pre-war navigation focused on fishing and the international ore trade from Narvik and Petsamo. Soviet settlements along the coast and rivers of the Barents Sea and Kara Sea relied upon summer coastal shipping for supplies from railheads at Arkhangelsk and Murmansk. The Soviet Union extended the Northern Sea Route past the Taymyr Peninsula to the Bering Strait in 1935.[1] 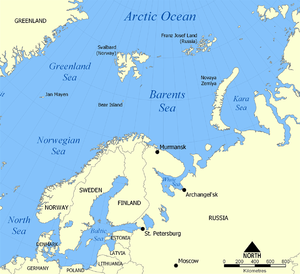 Map of the area of greatest naval activity.

The Winter War opened the northern flank of the eastern front of World War II. Arctic[2] naval presence was initially dominated by the Soviet Northern Fleet of a few destroyers with larger numbers of submarines, minesweepers, and torpedo cutters supported by icebreakers. The success of the German invasion of Norway provided the Kriegsmarine with naval bases from which capital ships might challenge units of the Royal Navy Home Fleet. Luftwaffe anti-shipping aircraft of Kampfgeschwader 26 (KG 26) and Kampfgeschwader 30 (KG 30) operated intermittently from Norwegian airfields, while routine reconnaissance was undertaken by Küstenfliegergruppen aircraft including Heinkel He 115s and Blohm & Voss BV 138s.[3] To support the Soviet Union against the German invasion, the Allies initiated a series of PQ and JW convoys bringing military supplies to the Soviet Union in formations of freighters screened by destroyers, corvettes and minesweepers. Escorting cruisers typically maneuvered outside the formation, while a larger covering force including battleships and aircraft carriers often steamed nearby to engage Kriegsmarine capital ships or raid their Norwegian bases.

The Soviet Union and Germany employed smaller coastal convoys to maintain the flow of supplies to the Soviet arctic coast, transport strategic metal ores to Germany, and sustain troops on both sides of the northern flank of the eastern front. Soviet convoys hugged the coast to avoid ice while German convoys used fjords to evade Royal Navy patrols. Both sides devoted continuing efforts to minelaying and minesweeping of these shallow, confined routes vulnerable to mine warfare and submarine ambushes. German convoys were typically screened by minesweepers and submarine chasers while Soviet convoys were often protected by minesweeping trawlers and torpedo cutters. A branch of the Pacific Route began carrying Lend-Lease goods through the Bering Strait to the Soviet Arctic coast in June, 1942. The number of westbound cargo ship voyages along this route was 23 in 1942, 32 in 1943, 34 in 1944, and 31 after Germany surrendered in 1945. Total westbound tonnage through the Bering Strait was 452,393 in comparison to 3,964,231 tons of North American wartime goods sent across the Atlantic to Soviet Arctic ports.[4] A large portion of the Arctic route tonnage was fuel for Siberian airfields on the Alaska-Siberia air route.[5] 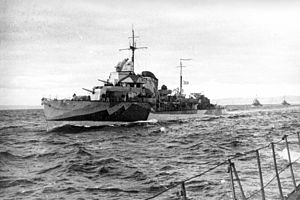 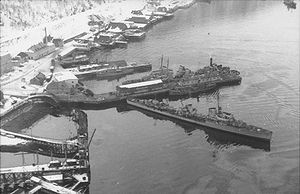 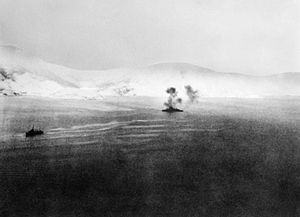 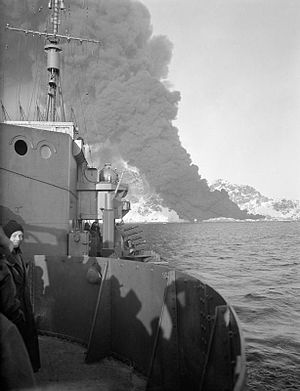 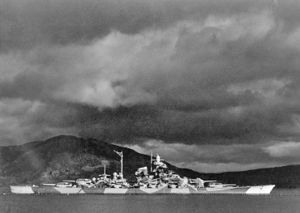 Tirpitz waiting in Norway for another Allied convoy. 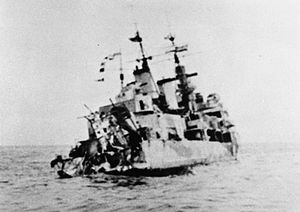 HMS Edinburgh during the battle for convoy QP 11. 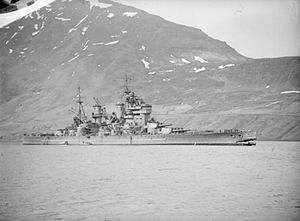 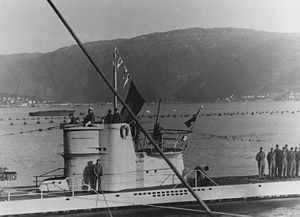 U-255, painted white for arctic camouflage, returning to base after attacking convoy PQ 17. 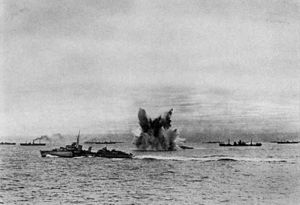 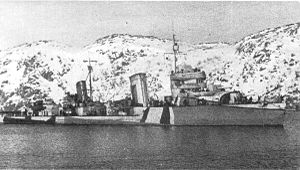 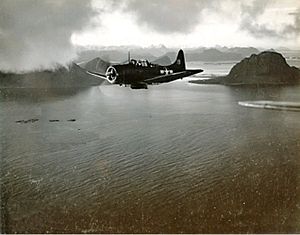 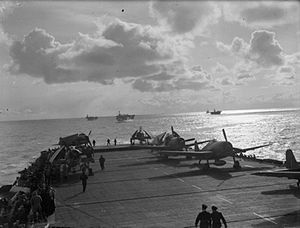 Aircraft carriers of Operation Tungsten preparing for an airstrike on Tirpitz. 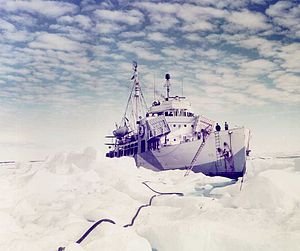