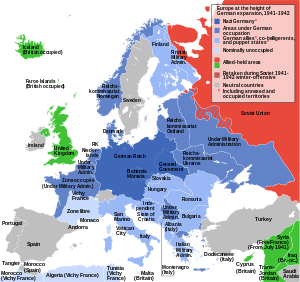 There were many areas annexed by Nazi Germany both immediately before and throughout the course of World War II. 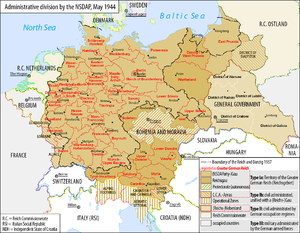 Gaue, Reichsgaue and other administrative divisions of Germany proper in May 1944

The territories listed below are those that were fully annexed into Germany proper. 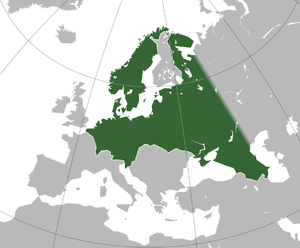 A hypothetical extent of the Greater Germanic Reich.

The territories listed below are those that were partially incorporated into the Greater German Reich.

In the coming Nazi New Order, other lands were considered for annexation sooner or later, for instance North Schleswig, German-speaking Switzerland, and the zone of intended German settlement in north-eastern France, where a Gau or a Reichskommissariat centred on Burgundy was intended for creation, and that Heinrich Himmler had ambitions for it to be his SS's very own fiefdom. The goal was to unite all or as many as possible ethnic Germans and Germanic peoples, including non-Germanic speaking ones considered "Aryans", in a Greater Germanic Reich.

The eastern Reichskommissariats in the vast stretches of Ukraine and Russia were also intended for future integration into that Reich, with plans for them stretching to the Volga or even beyond the Urals. They were deemed of vital interest for the survival of the German nation, as it was a core tenet of national-socialist ideology that it needed "living space" (Lebensraum), creating a "pull towards the East" (Drang nach Osten) where that could be found and colonized.

Whatever was once an Austrian possession we must get back into our own hands. The Italians by their infidelity and treachery have lost any claim to a national state of the modern type.

The annexation of the entire North Italy was also suggested in the long run.[6]