From Infogalactic: the planetary knowledge core
Jump to: navigation, search
For the equivalent Vedic concept, see Ṛta. For other uses, see Arete (disambiguation). 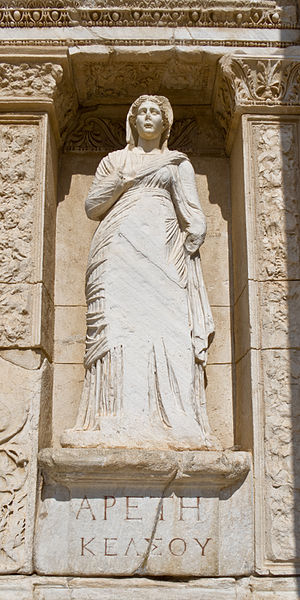 Statue of Arete in Celsus' Library in Ephesus

Arete (Greek: ἀρετή), in its basic sense, means "excellence of any kind".[1] The term may also mean "moral virtue".[1] In its earliest appearance in Greek, this notion of excellence was ultimately bound up with the notion of the fulfillment of purpose or function: the act of living up to one's full potential.

The term from Homeric times onwards is not gender specific. Homer applies the term of both the Greek and Trojan heroes as well as major female figures, such as Penelope, the wife of the Greek hero Odysseus. In the Homeric poems, Arete is frequently associated with bravery, but more often with effectiveness. The man or woman of Arete is a person of the highest effectiveness; they use all their faculties—strength, bravery and wit—to achieve real results. In the Homeric world, then, Arete involves all of the abilities and potentialities available to humans.

The Ancient Greeks applied the term to anything: for example, the excellence of a chimney, the excellence of a bull to be bred and the excellence of a man. The meaning of the word changes depending on what it describes, since everything has its own peculiar excellence; the arete of a man is different from the arete of a horse. This way of thinking comes first from Plato, where it can be seen in the Allegory of the Cave.[3] In particular, the aristocratic class was presumed, essentially by definition, to be exemplary of arete: "The root of the word is the same as aristos, the word which shows superlative ability and superiority, and "aristos" was constantly used in the plural to denote the nobility."[4]

By the 5th and 4th centuries BC, arete as applied to men had developed to include quieter virtues, such as dikaiosyne (justice) and sophrosyne (self-restraint). Plato attempted to produce a moral philosophy that incorporated this new usage,[5] but it was in the work of Aristotle that the doctrine of arete found its fullest flowering. Aristotle's Doctrine of the Mean is a paradigm example of his thinking.

Arete has also been used by Plato when talking about athletic training and also the education of young boys. Stephen G. Miller delves into this usage in his book "Ancient Greek Athletics". Aristotle is quoted as deliberating between education towards arete "...or those that are theoretical".[6] Educating towards arete in this sense means that the boy would be educated towards things that are useful in life. But even Plato himself says that arete is not something that can be agreed upon. He says, "Nor is there even an agreement about what constitutes arete, something that leads logically to a disagreement about the appropriate training for arete."[7] To say that arete has a common definition of excellence or fulfillment may be an overstatement simply because it was very difficult to pinpoint arete, much less the proper ways to go about obtaining it.

It was commonly believed that the mind, body, and soul each had to be developed and prepared for a man to live a life of arete. This led to the thought that athletics had to be present in order to obtain arete. They did not need to consume one's life, merely exercise the body into the right condition for arete, just like the mind and soul would be exercised by other means.[7]

In Homer's Iliad and Odyssey, "arete" is used mainly to describe heroes and nobles and their mobile dexterity, with special reference to strength and courage, but it is not limited to this. Penelope's arete, for example, relates to co-operation, for which she is praised by Agamemnon. The excellence of the gods generally included their power, but, in the Odyssey (13.42), the gods can grant excellence to a life, which is contextually understood to mean prosperity. Arete was also the name of King Alcinous's wife. According to Bernard Knox's notes found in the Robert Fagles translation of The Odyssey, "arete" is also associated with the Greek word for pray, "araomai".[8]

In regards to the Iliad the way Homer describes Achilles is an example of Arete (187). Arete is associated with the goodness and prowess of a warrior (187). Debra Hawhee points out that the norms and practices of Athenian virtuosity “operate within the politics of reputation, whose normative poles are honor and shame” (187). This means Arete functions as an external phenomenon depending on outside reception and acknowledgement for its instantiation (188). Dying in battle or securing a victory in the Olympic Games were considered agathos (good) and, hence, deserving of timê (honor). So, not only is Achilles a brave and brilliant warrior but also, from the outset, he is destined to die in battle at Troy with the utmost glory—a guarantor of Arete.[9]

Arete was occasionally personified as a goddess, the sister of Homonoia (not to be confused with Harmonia), and the daughter of the goddess of justice, Praxidike.

Arete and Homonoia were known jointly as the Praxidikai (Exacters of Justice). As with many minor Greek deities, there is little or no real mythical background to Arete, who is used at most as a personification of virtue.

The only story involving Arete was originally told in the 5th century BC by the sophist Prodicus, and concerns the early life of the hero Heracles. At a crossroads, Arete appeared to Heracles as a young maiden, and offered him glory and a life of struggle against evil; her counterpart Kakia (κακία, "badness"), offered him wealth and pleasure. Heracles chose to follow the path of Arete.[citation needed]

This story was later used by Christian writers, such as Methodius of Olympus, Justin Martyr, Clement of Alexandria, and Basil of Caesarea. Justin and Basil portray Arete as a squalidly dressed and unattractive figure,[citation needed] but Methodius portrays her positively in Banquet of the Ten Virgins.[citation needed]