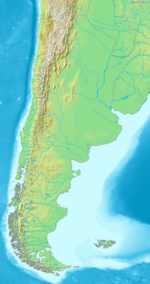 Argentine Sea, off the atlantic coast of Argentina

The Argentine Sea (Spanish: Mar Argentino) is the sea within the continental shelf off the Argentine mainland.

According to the law 23968, the territorial waters of Argentina extend 12 nautical miles from the line from the goulfs of San Matías and San Jorge to the outer limits of the Río de la Plata. The contiguous zone extends 12 nautical miles after the territorial waters, and the exclusive economic zone 200 nautical miles from it. The continental shelf extends to either the limits of the exclusive economic zone or the shelf slope. Argentina has signed and ratified the United Nations Convention on the Law of the Sea.

The exclusive economic zone claimed by Argentina overlap with claims maintained by the United Kingdom on behalf of the Falkland Islanders and similar claims around the Island of South Georgia and the South Sandwich Islands. The UK Falkland Islands claim boundary starts from the midpoint between Argentina and the Islands to the West and stretches 200 nautical miles in other directions with similar claims around the other British Overseas Territories.[2]

Argentina announced its claim without consultation with the United Kingdom and despite the fact that the United Kingdom has administered the area, for the most part peacefully, for over 180 years. In the years 1990 to 2005 fishing and mineral resources in the area were administered by joint commissions between Argentina and the United Kingdom, Argentina unilaterally withdrew from these organisations in 2005 to pursue a more aggressive stance in its claim to the Falkland Islands. At any one time Argentina usually has a single vessel patrolling the undisputed area of its claim,[3] the vessels do not enter the exclusive economic zone of the United Kingdom although there have been reports of Argentine warships threatening vessels on the Falkland side of the border by radio.[4]

Under the terms of the United Nations Convention on the Law of the Sea Article 59 disputed and overlapping claims have no legal force until the dispute is resolved between the opposing parties.

The Argentine sea is one of the highest temperate seas of the world. It receives the cold Falkland Current from the south, which comes from the Antarctic, and the warm Brazil Current from the north.[5]

The Argentine sea has 12 areas identified as places of great biodiversity. There are two international protected areas, one national, and eighteen provincial ones.[5]