From Infogalactic: the planetary knowledge core
Jump to: navigation, search
For other uses, see Argonaut (disambiguation). 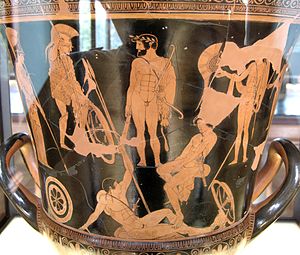 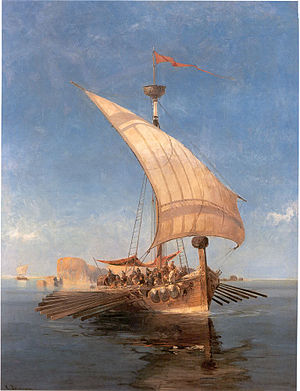 The Argonauts (Ancient Greek: Ἀργοναῦται Argonautai) were a band of heroes in Greek mythology, who in the years before the Trojan War, around 1300 BC,[1] accompanied Jason to Colchis in his quest to find the Golden Fleece. Their name comes from their ship, Argo, named after its builder, Argus. "Argonauts" literally means "Argo sailors". They were sometimes called Minyans, after a prehistoric tribe in the area.

After the death of King Cretheus, the Aeolian Pelias usurped the Iolcan throne from his half-brother Aeson and became king of Iolcus in Thessaly (near the modern city of Volos). Because of this unlawful act, an oracle warned him that a descendant of Aeolus would seek revenge. Pelias put to death every prominent descendant of Aeolus he could, but spared Aeson because of the pleas of their mother Tyro. Instead, Pelias kept Aeson prisoner and forced him to renounce his inheritance. Aeson married Alcimede, who bore him a son named Jason. Pelias intended to kill the baby at once, but Alcimede summoned her kinswomen to weep over him as if he were stillborn. She faked a burial and smuggled the baby to Mount Pelion. He was raised by the centaur Chiron, the trainer of heroes.

When Jason was 20 years old, an oracle ordered him to dress as a Magnesian and head to the Iolcan court. While traveling Jason lost his sandal crossing the muddy Anavros river while helping an old woman (Hera in disguise). The goddess was angry with King Pelias for killing his stepmother Sidero after she had sought refuge in Hera's temple.

Another oracle warned Pelias to be on his guard against a man with one shoe. Pelias was presiding over a sacrifice to Poseidon with several neighboring kings in attendance. Among the crowd stood a tall youth in leopard skin with only one sandal. Pelias recognized that Jason was his nephew. He could not kill him because prominent kings of the Aeolian family were present. Instead, he asked Jason: "What would you do if an oracle announced that one of your fellow-citizens were destined to kill you?" Jason replied that he would send him to go and fetch the Golden Fleece, not knowing that Hera had put those words in his mouth.

Jason learned later that Pelias was being haunted by the ghost of Phrixus. Phrixus had fled from Orchomenus riding on a divine ram to avoid being sacrificed and took refuge in Colchis where he was later denied proper burial. According to an oracle, Iolcus would never prosper unless his ghost was taken back in a ship, together with the golden ram's fleece. This fleece now hung from a tree in the grove of the Colchian Ares, guarded night and day by a dragon that never slept. Pelias swore before Zeus that he would give up the throne at Jason's return while expecting that Jason's attempt to steal the Golden Fleece would be a fatal enterprise. However, Hera acted in Jason's favour during the perilous journey.

The crew of the Argo

There is no definite list of the Argonauts. H.J. Rose explains this was because "an Argonautic ancestor was an addition to even the proudest of pedigrees."[2] The following list is collated from several lists given in ancient sources.[3][4][5]

Several more names are discoverable from other sources. Amyrus, eponym of a Thessalian city, is given by Stephanus of Byzantium as "one of the Argonauts";[6] he is otherwise said to have been a son of Poseidon and to have given his name to the river Amyrus.[7] Azorus was the helmsman of Argo according to Hesychius of Alexandria;[8] he could be the same as the Azorus mentioned by Stephanus as founder of the city Azorus in Pelagonia.[9]

Adaptations of the myth

Jason and the Argonauts (1963), directed by Don Chaffey and featuring special effects by Ray Harryhausen, shows Jason hosting Olympics-like games and selecting his crew from among the winners.

In the animated television serie Captain Fathom (1965) produced by Cambria Productions, the main characters sail in a submarine called the "Argonaut".

A Soviet cartoon called The Argonauts was made in 1971.

The German movie Das Goldene Ding (The golden thing, 1972), directed by Edgar Reitz together with three co-directors, depicts Argonauts as young boys, as they seem to have been according to original Greek sources. It pays a special attention to how machines that were made possible by the relatively simple technology of the time allow for building the ship and other devices.

The 1977 Doctor Who serial Underworld is loosely based on the story of Jason and the Argonauts.

A Hallmark presentation TV movie, Jason and the Argonauts (2000), shows Jason having to settle for men with no sailing experience. This includes a thief who says "Who better than a thief to grab the Golden Fleece?"

In 2001, a radio drama adaptation of Apollonius' Argonautica was presented on the Radio Tales series for National Public Radio.

Jason and the Argo, along with a small number of the more legendary Argonauts and Greeks, were featured in the 2008 video game Rise of the Argonauts

Jason, along with another Argonaut, appear in the videogame God of War II.