The Argun River (Russian: Аргу́н, Chechen: Orga,[1] Georgian: არღუნი - arghuni) flows through the northern Caucasus, Georgia, and the Chechen Republic of Russia. It is an affluent of the Sunzha and lies within the river basin of the Terek. The river has its sources on the northern slopes of the Caucasus in Georgia. The Argun flows in western Chechnya through Itum-Kalinsky and Shatoysky Districts.

This area was the first place where Chechens established themselves and many ruins of former villages built in the traditional style can still be seen. The Argun serves as a natural border between the Shalinsky and the Groznensky Districts. The occupation of its valley by the Russians in 1858 was an important event in the last phase of the Murid War. Before the First and Second Chechen Wars the region around the river was populated by numerous farms and houses. The town of Argun is named after the river.

On September 7, 2008, the only bridge crossing the Argun River, connecting northern and southern territories of Chechnya, collapsed. Drivers caught on the bridge escaped without injury. A federal road administration representative linked the accident to abnormal stress from heavy military vehicles.[2] 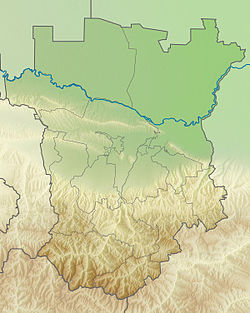 Itum Kale
Blue dots are on the Argun River.