From Infogalactic: the planetary knowledge core
Jump to: navigation, search
This article is about the term in Buddhism. For the term in Jainism, see Arihant (Jainism). 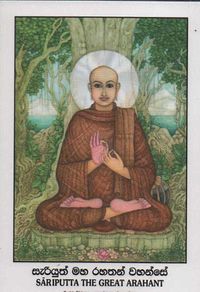 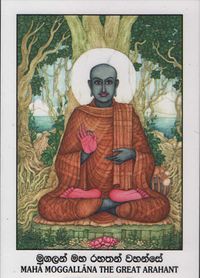 Theravada Buddhism defines arhat (Sanskrit) or arahant (Pali) as "one who is worthy"[1] or as a "perfected person"[1][2] having attained nirvana.[2][1] Other Buddhist traditions have used the term for people far advanced along the path of Enlightenment, but who may not have reached full Buddhahood.[3]

The understanding of the concept has changed over the centuries, and varies between different schools of Buddhism and different regions. A range of views on the attainment of arhats existed in the early Buddhist schools. The Sarvāstivāda, Kāśyapīya, Mahāsāṃghika, Ekavyāvahārika, Lokottaravāda, Bahuśrutīya, Prajñaptivāda, and Caitika schools all regarded arhats as imperfect in their attainments compared to buddhas.[4][5][6]

Mahayana Buddhist teachings urge followers to take up the path of a bodhisattva, and to not fall back to the level of arhats and śrāvakas.[7] The arhats, or at least the senior arhats, came to be widely regarded[by whom?] as "moving beyond the state of personal freedom to join the Bodhisattva enterprise in their own way".[3]

Mahayana Buddhism regarded a group of Eighteen Arhats (with names and personalities) as awaiting the return of the Buddha as Maitreya, and other groupings of 6, 8, 16, 100, and 500 also appear in tradition and Buddhist art, especially in East Asia.[8] They can be seen as the Buddhist equivalents of the Christian saints, apostles or early disciples and leaders of the faith.[8] 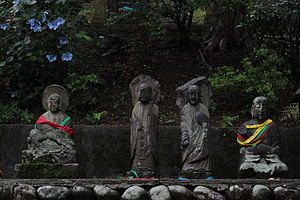 The Sanskrit word arhat (Pāḷi arahant) is a present participle coming from the verbal root √arh 'to deserve',[9] cf arha 'meriting, deserving'; arhaṇa 'having a claim, being entitled'; arhita (past participle) 'honoured, worshipped'.[10] The word is used in the Ṛgveda with this sense of 'deserving'.[11]

A common folk etymology derives the word from ari (enemy) and hanta from the root √han (cf: Hunter) 'to strike, to kill'; hence the translation 'foe-destroyer'. Professor Richard Gombrich has argued that the present participle is "jarring" and seems out of place when there is an adjective from the same root (arha). Since Jains used two Prakrit forms of the word arahanta and arihanta, the folk etymology may well be the correct etymology. Gombrich argues that this stems from the same metaphor as the Jain title jina "conqueror", whence jaina "related to the conqueror", i.e. Jainism.[12]

The term arhat was translated into some East Asian languages phonetically as a transliterated term, exemplified in the Chinese āluóhàn (Ch. 阿羅漢), often shortened to simply luóhàn (Ch. 羅漢). This may appear in English as luohan or lohan. In Japanese the pronunciation of the same Chinese characters (Ja. 阿羅漢) is rakan or arakan.

The Tibetan term for arhat was translated by meaning from Sanskrit. This translation, dgra bcom pa, means "one who has destroyed the foes of afflictions."[13] Thus the Tibetan translators also understood the meaning of arhat to be ari-hanta.

A range of views on the attainment of arhats existed in the early Buddhist schools. The Sarvāstivāda, Kāśyapīya, Mahāsāṃghika, Ekavyāvahārika, Lokottaravāda, Bahuśrutīya, Prajñaptivāda and Caitika schools all regarded arhats as being imperfect in their attainments compared to buddhas.[5][6][14]

The Dharmaguptaka sect believed that "the Buddha and those of the Two Vehicles, although they have one and the same liberation, have followed different noble paths."[15]

The Mahīśāsaka and the Theravada regarded arhats and buddhas as being similar to one another. The 5th century Theravadin commentator Buddhaghosa regarded arhats as having completed the path to enlightenment.[note 1] According to Bhikkhu Bodhi, the Pāli Canon portrays the Buddha declaring himself to be an arahant.[17][note 2] According to Bhikkhu Bodhi, nirvāṇa is "the ultimate goal", and one who has attained nirvana has attained arahantship:[note 3] Bhikkhu Bodhi writes, "The defining mark of an arahant is the attainment of nirvāṇa in this present life."[17]

The Mahayana discerned a hierarchy of attainments, with samyaksambuddhas at the top, mahāsattvas below that, pratyekabuddhas below that and arhats further below.[18] "But what was it that distinguished the bodhisattva from the sravaka, and ultimately the buddha from the arhat? The difference lay, more than anywhere else, in the altruistic orientation of the bodhisattva."[19]

In the early Buddhist schools

In pre-Buddhist India, the term arhat, denoting a saintly person in general, was closely associated with miraculous power and asceticism. The Buddhists drew a sharp distinction between their Arhat and Indian holy men in general, in Buddhism these miraculous powers were no longer central to arhat identity or to his mission.[20]

A range of views on the relative perfection of arhats existed amongst the early Buddhist schools. In general, Mahāsāṃghikas such as the Ekavyāvahārikas, Lokottaravādins,[14] Bahuśrutīyins,[21] Prajñaptivādins, and Caitikas[5] schools, advocated the transcendental and supramundane nature of the buddhas and bodhisattvas and the fallibility of arhats.[22] The Caitikas, for example, advocated the ideal of the bodhisattva (bodhisattvayāna) over that of the arhat (śrāvakayāna), and they viewed arhats as being fallible and still subject to ignorance.[5]

According to A.K. Warder, the Sarvāstivādins held the same position as the Mahāsāṃghika branch regarding arhats, considering them to be imperfect and fallible.[6] In the Sarvāstivādin Nāgadatta Sūtra, the demon Māra takes the form of Nāgadatta's father, and tries to convince Nāgadatta, who was a bhikṣuṇī, to work toward the lower stage of arhatship rather than striving to become a fully enlightened buddha (samyaksaṃbuddha).

Māra therefore took the disguise of Nāgadatta's father and said thus to Nāgadatta: "Your thought is too serious. Buddhahood is too difficult to attain. It takes a hundred thousand nayutas of koṭis of kalpas to become a Buddha. Since few people attain Buddhahood in this world, why don't you attain Arhatship? For the experience of Arhatship is the same as that of nirvāṇa; moreover, it is easy to attain Arhatship.[23]

In her reply, Nāgadatta rejects arhatship as a lower path, saying, "A Buddha's wisdom is like empty space of the ten-quarters, which can enlighten innumerable people. But an Arhat's wisdom is inferior."[23]

The Kāśyapīya school also held the doctrine that arhats were fallible and imperfect, similar to the view of the Sarvāstivādins and the various Mahāsāṃghika sects.[6] The Kāśyapīyins believed that arhats have not fully eliminated desires, that their "perfection" is incomplete, and that it is possible for them to relapse.[6]

In Theravada Buddhism, an arahant is a person who has eliminated all the unwholesome roots which underlie the fetters – who upon their death will not be reborn in any world, since the bonds (fetters) that bind a person to the samsara have been finally dissolved. In the Pali Canon, the word tathagata is sometimes used as a synonym for arahant, though the former usually refers to the Buddha alone.[note 4]

After attainment of Nibbana, the five aggregates (physical forms, feelings/sensations, perception, mental formations and consciousness) will continue to function, sustained by physical bodily vitality. This attainment is termed the nibbana element with a residue remaining. But once the Arahant pass-away and with the disintegration of the physical body, the five aggregates will cease to function, hence ending all traces of existence in the phenomenal world and thus total release from the misery of samsara. It would then be termed the nibbana element without residue remaining.[24] Parinibbana occurs at the death of an Arahant.

In Theravada Buddhism the Buddha himself is first identified as an arahant, as are his enlightened followers, because they are free from all defilements, without greed, hatred, delusion, ignorance and craving. Lacking "assets" which will lead to future birth, the arahant knows and sees the real here and now. This virtue shows stainless purity, true worth, and the accomplishment of the end, nibbana.[25]

In his study of the roles of arahants, buddhas, and bodhisattvas, Nathan Katz writes that there is a tendency in the Theravāda school to exclude laypeople from the possibility of achieving arahantship.[26]

While in the Sutta Piṭaka, arhattā was open to all, both in principle and in fact, there was a growing tendency among later Theravāda saṅghikas to restrict arhattā to those wearing the robe. Earlier we indicated a Milindapañha verse which held that while arhattā might be attainable by a layperson, within one day of its attainment he would have to either enter the saṅgha or die.

In the Pali canon, Ānanda states that he knows monastics to achieve nibbana in one of four ways:[original research?][27][note 5]

For those that have destroyed greed and hatred (in the sensory context) with some residue of delusion, are called anagami (non-returner). Anagamis will not be reborn into the human world after death, but into the heaven of the Pure Abodes, where only anagamis live. There, they will attain full enlightenment.

The Theravadin commentator Buddhaghosa placed the arahant at the completion of the path to liberation.[note 6] 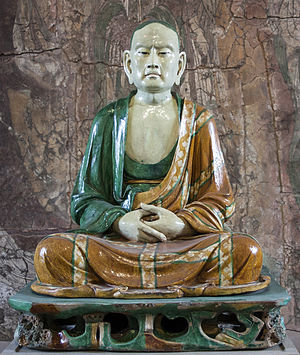 Seated Luohan from Yixian, around 1000, one of a famous Group of glazed pottery luohans from Yixian

Mahayana Buddhists see Gautama Buddha himself as the ideal towards which one should aim in one's spiritual aspirations. A hierarchy of general attainments is envisioned with the attainments of arhats and pratyekabuddhas being clearly separate and below that of samyaksambuddha or tathāgatas such as Gautama Buddha.[7]

In contrast to the goal of becoming a fully enlightened buddha, the path of a śrāvaka in being motivated by seeking personal liberation from saṃsāra is often portrayed as selfish and undesirable.[28] There are even some Mahāyāna texts that regard the aspiration to arhatship and personal liberation as an outside path.[29] Instead of aspiring for arhatship, Mahayanins are urged to instead take up the path of the bodhisattva and to not fall back to the level of arhats and śrāvakas.[7] Therefore, it is taught that an arhat must go on to become a bodhisattva eventually. If they fail to do so in the lifetime in which they reach the attainment, they will fall into a deep samādhi of emptiness, thence to be roused and taught the bodhisattva path, presumably when ready. According to the Lotus Sutra, any true arhat will eventually accept the Mahāyāna path.[30] 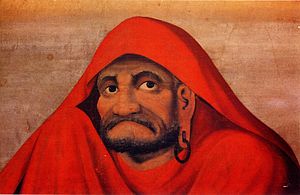 Hanging scroll of an arhat by Japanese painter Shiba Kōkan

Mahāyāna teachings often consider the śrāvaka path to be motivated by fear of saṃsāra, which renders them incapable of aspiring to buddhahood, and that they therefore lack the courage and wisdom of a bodhisattva.[31] Novice bodhisattvas are compared to śrāvakas and arhats at times. In the Aṣṭasāhasrikā Prajñāpāramitā Sūtra, there is an account of sixty novice bodhisattvas who attain arhatship despite themselves and their efforts at the bodhisattva path because they lacked the abilities of prajnaparamita and skillful means to progress as bodhisattvas toward complete enlightenment (Skt. Anuttarā Samyaksaṃbodhi). This is because they are still viewed as having innate attachment and fear of saṃsāra. The Aṣṭasāhasrikā Prajñāpāramitā Sūtra compares these people to a giant bird without wings that cannot help but plummet to the earth from the top of Sumeru.[31]

Mahayan Buddhism has viewed the śrāvaka path culminating in arhatship as a lesser accomplishment than complete enlightenment, but still accords due respect to arhats for their respective achievements. Therefore, buddha-realms are depicted as populated by both śrāvakas and bodhisattvas.[31] Far from being completely disregarded, the accomplishments of arhats are viewed as impressive, essentially because they have transcended the mundane world.[32] Chinese Buddhism and other East Asian traditions have historically accepted this perspective, and specific groups of arhats are venerated as well, such as the Sixteen Arhats, the Eighteen Arhats, and the Five Hundred Arhats.[33] The first famous portraits of these arhats were painted by the Chinese monk Guanxiu (Chinese: 貫休; pinyin: Guànxiū) in 891 AD. He donated these portraits to Shengyin Temple in Qiantang (modern Hangzhou), where they are preserved with great care and ceremonious respect.[34]

In some respects, the path to arhatship and the path to complete enlightenment are seen as having common grounds. However, a distinctive difference is seen in the Mahāyāna doctrine pushing emotional and cognitive non-attachment to their logical consequences. Of this, Paul Williams writes that in Mahāyāna Buddhism, "Nirvāṇa must be sought without being sought (for oneself), and practice must be done without being practiced. The discursive mode of thinking cannot serve the basic purpose of attainment without attainment."[35]