From Infogalactic: the planetary knowledge core
(Redirected from Aristotelian view of God)
Jump to: navigation, search

Aristotelian theology and the scholastic view of God have been influential in Western intellectual history.

In his first philosophy, later called the Metaphysics, (or “after the Physics”), Aristotle discusses the meaning of being as being. He refers to the unmoved movers, and assigns one to each movement in the heavens and tasks future astronomers with correlating the estimated 47 to 55 motions of the Eudoxan planetary model with the most current and accurate observations. According to Aristotle, each unmoved mover continuously contemplates its own contemplation; The planets and stars, which have their source of motion within themselves (by virtue of aether, Aristotle's fifth element) aspire to emulate the uniform circular motion of their particular mover. Thus captivated, their tireless performance is entirely the result of their own desire. This is one way in which the movers are said to be unmoved. Likewise, they must have sensory perception whatsoever on account of Aristotle's theory of cognition: were any form of sense perception to intrude upon their thoughts, in that instant they would cease to be themselves, because actual self-reflection is their singular essence, their whole being. Like the heavenly bodies in their unadorned pursuit, so the wise look, with affection, toward the star; and hence as a role model, they inspire those who look up to them, and by whom others still, will yet find themselves enthralled, and so on, creating the enduring natural order of aeon, season, animal and plant. 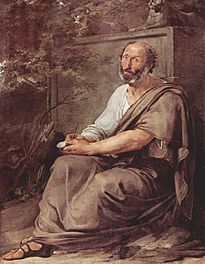 In the Metaphysics, Aristotle discusses actuality (entelecheia, Greek: ἐντελέχεια) and potentiality (dynamis, Greek: δύναμις). The former is perfection, realization, fullness of being; the latter imperfection, incompleteness, perfectibility. The former is the determining, the latter the determinable principle. The unmoved movers are entirely actual, Actus Purus, because they are unchanging, eternal, immaterial substance.

All material beings have some potentiality. The Physics introduces matter and form and the four causes -- material, formal, efficient and final. For example, to explain a statue, one can offer:

Contrary to the later so-called "traditional" view of prime matter (prima materia in Latin), Aristotle asserts that there can be no pure potentiality without any actuality whatsoever. All material substances have unactualized potentials.

Aristotle argues that, although motion is eternal, there cannot be an infinite series of movers and of things moved. Therefore there must be some, who are not the first in such a series, that inspire the eternal motion without themselves being moved "as the soul is moved by beauty". Because the planetary spheres each move unfalteringly for all eternity in uniform circular motion with a given rotational period relative to the supreme diurnal motion of the sphere of fixed stars (or First Heaven), they must each love and desire to mimic different unmoved movers corresponding to the given periods.

Because they eternally inspire uniform motion in the celestial spheres, the unmoved movers must themselves be eternal and unchanging. Because they are eternal, they have already had an infinite amount of time in which to actualize any potentialities and therefore cannot be a composition of matter and form, or potentiality and actuality. They must always be fully actual, and thus immaterial, because at all times in history they have already existed an infinite amount of time, and things that do not actually come to fruition given unlimited opportunities to do so cannot potentially do so.

The life of the unmoved mover is self-contemplative thought ("νοήσεως νόησις (noeseos noesis)", i.e. "thought of thought").[1][2] According to Aristotle, the gods cannot potentially be distracted from this eternal self-contemplation because, in that instant, they would cease to exist.

The Neoplatonists were quite justified in regarding themselves as the spiritual heirs of Pythagoras; and, in their hands, philosophy ceased to exist as such, and became theology. And this tendency was at work all along; hardly a single Greek philosopher was wholly uninfluenced by it. Perhaps Aristotle might seem to be an exception; but it is probable that, if we still possessed a few such "exoteric" works as the Protreptikos in their entirety, we should find that the enthusiastic words in which he speaks of the "blessed life" in the Metaphysics and in the Ethics (Nicomachean Ethics) were less isolated outbursts of feeling than they appear now. In later days, Apollonios of Tyana showed in practice what this sort of thing must ultimately lead to. The theurgy and thaumaturgy of the late Greek schools were only the fruit of the seed sown by the generation which immediately preceded the Persian War.

Aristotle's principles of being (see section above) influenced Anselm's view of God, whom he called "that than which nothing greater can be conceived." Anselm thought that God did not feel emotions such as anger or love, but appeared to do so through our imperfect understanding. The incongruity of judging "being" against something that might not exist, may have led Anselm to his famous ontological argument for God's existence.