From Infogalactic: the planetary knowledge core
(Redirected from Arithmetic and logic structures)
Jump to: navigation, search

An arithmetic logic unit (ALU) is a digital electronic circuit that performs arithmetic and bitwise logical operations on integer binary numbers. This is in contrast to a floating-point unit (FPU), which operates on floating point numbers. An ALU is a fundamental building block of many types of computing circuits, including the central processing unit (CPU) of computers, FPUs, and graphics processing units (GPUs). A single CPU, FPU or GPU may contain multiple ALUs.

The inputs to an ALU are the data to be operated on, called operands, and a code indicating the operation to be performed; the ALU's output is the result of the performed operation. In many designs, the ALU also exchanges additional information with a status register, which relates to the result of the current or previous operations.

A symbolic representation of an ALU and its input and output signals, indicated by arrows pointing into or out of the ALU, respectively. Each arrow represents one or more signals.

A basic ALU has three parallel data buses consisting of two input operands (A and B) and a result output (Y). Each data bus is a group of signals that conveys one binary integer number. Typically, the A, B and Y bus widths (the number of signals comprising each bus) are identical and match the native word size of the encapsulating CPU (or other processor).

The opcode input is a parallel bus that conveys to the ALU an operation selection code, which is an enumerated value that specifies the desired arithmetic or logic operation to be performed by the ALU. The opcode size (its bus width) is related to the number of different operations the ALU can perform; for example, a four-bit opcode can specify up to sixteen different ALU operations. Generally, an ALU opcode is not the same as a machine language opcode, though in some cases it may be directly encoded as a bit field within a machine language opcode.

The status outputs are various individual signals that convey supplemental information about the result of an ALU operation. These outputs are usually stored in registers so they can be used in future ALU operations or for controlling conditional branching. The collection of bit registers that store the status outputs are often treated as a single, multi-bit register, which is referred to as the "status register" or "condition code register". General-purpose ALUs commonly have status signals such as:

The status input allows additional information to be made available to the ALU when performing an operation. Typically, this is a "carry-in" bit that is the stored carry-out from a previous ALU operation. 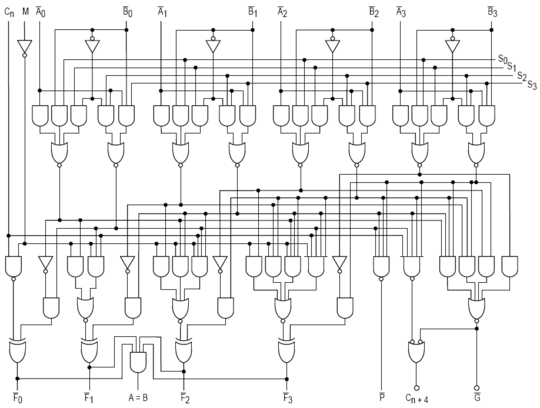 The combinational logic circuitry of the 74181 integrated circuit, which is a simple four-bit ALU

An ALU is a combinational logic circuit, meaning that its outputs will change asynchronously in response to input changes. In normal operation, stable signals are applied to all of the ALU inputs and, when enough time (known as the "propagation delay") has passed for the signals to propagate through the ALU circuitry, the result of the ALU operation appears at the ALU outputs. The external circuitry connected to the ALU is responsible for ensuring the stability of ALU input signals throughout the operation, and for allowing sufficient time for the signals to propagate through the ALU before sampling the ALU result.

In general, external circuitry controls an ALU by applying signals to its inputs. Typically, the external circuitry employs sequential logic to control the ALU operation, which is paced by a clock signal of a sufficiently low frequency to ensure enough time for the ALU outputs to settle under worst-case conditions.

For example, a CPU begins an ALU addition operation by routing operands from their sources (which are usually registers) to the ALU's operand inputs, while the control unit simultaneously applies a value to the ALU's opcode input, configuring it to perform addition. At the same time, the CPU also routes the ALU result output to a destination register that will receive the sum. The ALU's input signals, which are held stable until the next clock, are allowed to propagate through the ALU and to the destination register while the CPU waits for the next clock. When the next clock arrives, the destination register stores the ALU result and, since the ALU operation has completed, the ALU inputs may be set up for the next ALU operation.

A number of basic arithmetic and bitwise logic functions are commonly supported by ALUs. Basic, general purpose ALUs typically include these operations in their repertoires:

Although an ALU can be designed to perform complex functions, the resulting higher circuit complexity, cost, power consumption and larger size makes this impractical in many cases. Consequently, ALUs are often limited to simple functions that can be executed at very high speeds (i.e., very short propagation delays), and the external processor circuitry is responsible for performing complex functions by orchestrating a sequence of simpler ALU operations.

For example, computing the square root of a number might be implemented in various ways, depending on ALU complexity:

The implementations above transition from fastest and most expensive to slowest and least costly. The square root is calculated in all cases, but processors with simple ALUs will take longer to perform the calculation because multiple ALU operations must be performed.

Mathematician John von Neumann proposed the ALU concept in 1945 in a report on the foundations for a new computer called the EDVAC.[1]

The cost, size, and power consumption of electronic circuitry was relatively high throughout the infancy of the information age. Consequently, all serial computers and many early computers, such as the PDP-8, had a simple ALU that operated on one data bit at a time, although they often presented a wider word size to programmers. One of the earliest computers to have multiple discrete single-bit ALU circuits was the 1948 Whirlwind I, which employed sixteen of such "math units" to enable it to operate on 16-bit words.

In 1967, Fairchild introduced the first ALU implemented as an integrated circuit, the Fairchild 3800, consisting of an eight-bit ALU with accumulator.[2] Other integrated-circuit ALUs soon emerged, including four-bit ALUs such as the Am2901 and 74181. These devices were typically "bit slice" capable, meaning they had "carry look ahead" signals that facilitated the use of multiple interconnected ALU chips to create an ALU with a wider word size. These devices quickly became popular and were widely used in bit-slice minicomputers.

Microprocessors began to appear in the early 1970s. Even though transistors had become smaller, there was often insufficient die space for a full-word-width ALU and, as a result, some early microprocessors employed a narrow ALU that required multiple cycles per machine language instruction. Examples of this include the original Motorola 68000, which performed a 32-bit "add" instruction in two cycles with a 16-bit ALU, and the popular Zilog Z80, which performed eight-bit additions with a four-bit ALU.[3] Over time, transistor geometries shrank further, following Moore's law, and it became feasible to build wider ALUs on microprocessors.

Modern integrated circuit (IC) transistors are orders of magnitude smaller than those of the early microprocessors, making it possible to fit highly complex ALUs on ICs. Today, many modern ALUs have wide word widths, and architectural enhancements such as barrel shifters and binary multipliers that allow them to perform, in a single clock cycle, operations that would have required multiple operations on earlier ALUs.