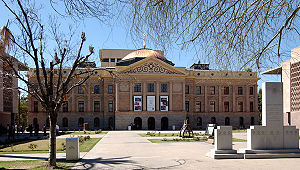 Arizona's electoral districts are different from the majority of U.S. states. Two representatives and one senator share each of the state's 30 electoral districts. Legislators are term limited to eight consecutive years in office, but can run again after two years or run for the opposite house than the one in which they serve.

Congress formed the New Mexico Territory in 1850 consisting of the land that is now Arizona north of the Gila River, along with what is now New Mexico, parts of Colorado and Nevada.[1] In 1853, the territory expanded under the Gadsden Purchase agreement by nearly 30,000 square miles of land south of the Gila River in Arizona, forming the state’s current boundary with Mexico.[1] In 1863, President Abraham Lincoln signed the Arizona Organic Act creating the Territory of Arizona. In 1864, the First Territorial Legislature convened in Prescott, the territory’s first capital.[1] The capital moved from Prescott to Tucson and back to Prescott before being permanently established in Phoenix in 1889.[1]

On June 20, 1910, President William Howard Taft signed the Enabling Act, allowing the Arizona Territory to hold a constitutional convention. Elected Arizona delegates convened in Phoenix at the territorial capitol on October 10, 1910 to draft the Arizona Constitution.[1] Although constitutional provisions for prohibition and women’s suffrage were rejected, voters added both within three years of statehood.[1] The new constitution was ratified by voters on February 9, 1911, and Arizona statehood took place on February 14, 1912, after eliminating a provision that caused an initial veto by the president.[1]

Arizona's First Legislature had 19 state senators and 35 state representatives and convened March 18, 1912.[1] The Legislature met on a biennial basis until 1950, when a constitutional amendment provided for annual sessions.[1]

Bills undergo three or four readings during the legislative process. After the first reading, they are assigned to committee. Committees can amend measures or hold legislation and prevent it from advancing. Once committee action is completed, the bill undergoes a second hearing and a third hearing, which happens just before the floor vote on it.[1] The bill is then sent to the opposite legislative house for consideration. If approved, without amendment, it is sent to the governor. If there is amendment, however, the Senate may either reconsider the bill with amendments or ask for the establishment of a conference committee to work out differences in the versions of the bill passed by each chamber. Once a piece of legislation approved by both houses is forwarded to the governor, it may either be signed or vetoed. If it is signed, it takes effect on the effective date of the legislation. If it is vetoed, lawmakers may override the veto with a vote by a three-fifths majority in both chambers.[1]

There are 30 legislative districts in Arizona, each of which is a multimember constituency. Each district elects a state senator and two state representatives for a two-year term. The crossing of upper and lower house districts into a single constituency is found in only seven U.S. state legislatures: Arizona, Idaho, Maryland, New Jersey, North Dakota, South Dakota, and Washington. Since Representatives and Senators are elected by exactly the same people, each House of the Arizona Legislature tends to have members with identical political philosophies, which is illustrated by the fact (see below) that the Republican party has two-thirds of the seats in each House. This produces, in effect, a "two-house unicameral" legislature.

Under article 4, part 2, section 21 of the Constitution of Arizona, members of the Arizona Legislature serve two-year terms, and legislators are subject to term limits.[3] With regard to term limits, members may only serve four consecutive terms (or eight years) in each house; however, once serving the limit, former members are re-eligible for election after a 2 year respite.[3] Members who are term-limited in one house frequently seek election to other positions within the state.

Before the 2010 general election, the Republican Party controlled both houses of the Arizona Legislature, with an advantage over the Democratic Party of 18–12 in the Senate and 35-25 in the House.[4]

After the 2010 election, the party breakdown in the Arizona Legislature was: Senate: 21 Republicans, 9 Democrats ; House of Representatives: 40 Republicans, 20 Democrats.

Before the 2012 general election, after resignations and one recall election, the party breakdown in the Arizona Legislature was: Senate (unchanged): 21 Republicans, 9 Democrats;[7] House of Representatives: 40 Republicans, 18 Democrats, 1 Independent, 1 Vacancy.[8]

After the 2012 election (preliminary results), the party breakdown in the Arizona Legislature is: