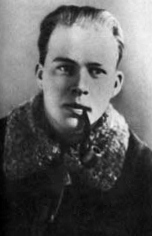 Gaidar was born in the town of Lgov in Imperial Russia (now in Kursk Oblast, Russian Federation), to a family of teachers.[2] In 1912 the family moved to Arzamas where in 1914 Arkady enrolled into a local secondary school. In 1917, an ardent 13-year-old Bolshevik follower, started to distribute leaflets and patrolling the streets. During one of such missions he received his first injury, a stab in the chest.[3]

In 1918 Golikov applied for the Communist Party membership and started working for the local newspaper Molot as a correspondent. In August 1918 he became a party member and in December volunteered for the Red Army, having lied about his age. In January 1919 Golikov went to the frontline as a Special Unit's commander's adjutant, to fight what the Soviet biographies referred to as the 'kulak gangs'.[2][4]

Fresh from the 7th Moscow Red Commanders' courses Gaidar went to the Ukrainian (later Polish) front as a company commander. In December 1919, injured and shell-shocked, he was demobilized, but in March 1920 returned to the Red Army, to the Caucasian Front's 9th Army, 37th Kuban division, as a company commander again. In summer 1920 Gaidar took part in fighting generals Geyman and Zhitikov units.[5]

In 1921, Gaidar participated in the suppression of several anti-communist uprisings, among them Antonovshchina. In 1922 he was moved to the Mongolian border (where the Red Army was fighting White Army units led by colonels Oliferov and Solovyov) but later that year got hospitalized with traumatic neuroses. He retired from the army in 1924 due to a contusion.[5][6]

In 1926 Gaidar's debut novel In the Days of Defeats and Victories was published, followed by Life For Nothing and The Mystery of a Mountain, a sci-fi novel and, most notably, R.V.S. (1926) which formed a blueprint for his career as a children's writer, telling stories of front-line camaraderie and the romanticism of the revolutionary struggle.[5] In 1927 Gaidar moved to Moscow. A year later he went to Archangelsk to work for a local newspaper Pravda Severa. Back in Moscow, in 1930 he published School novel (originally titled "The Plain Biography"). In the early 1930s several articles on Gaidar's works appeared in the Soviet press, Konstantin Fedin being his major supporter and mentor. In 1939 Gaidar was awarded the Order of the Badge of Honour.[2] Short stories "The Military Secret" (1935), "The Blue Cup" (1936) and the novel Blue Stars (1939) were followed by his most famous work, Timur and His Squad (1940), its hero named after, and partially based on the character of, the author's son. A captivating account of an altruistic pioneer youth gave birth to the mass Timur movement among Young Pioneers and other children's organizations all over the Soviet Union.[5]

As the Great Patriotic War broke out, Gaidar was sent to the front as a special correspondent for the newspaper Komsomolskaya Pravda. In the fall of 1941, Gaidar and other soldiers were surrounded by the German troops. He joined the partisans and became a machine gunner. On 26 October, Gaidar was killed in combat near village Lyuplyava. He was interred in the town of Kanev, where a monument honoring him was erected in 1953. Gaidar was awarded two orders and several medals.[2][5]

Arkady Gaidar's father Pyotr Isidorovich Golikov, a teacher (after the 1917 Revolution a Red Army commissar), came from a working family. Mother Natalya Arkadyevna Golikova (née Salkova), also a teacher (after the Revolution a doctor), was a daughter of a Tsarist Army officer. Arkady was the first of the couple's four children; his three sisters were Natalya, Olga and Yekaterina.[2]

Three biographical movies about Arkady Gaidar were released in the USSR: Serebryanye truby (Russian: Silver Trumpets) (1970), Konets imperatora taygi (Russian: The Death of the Taiga Emperor) (1978), and Ostayus s vami (Russian: I'll Stay with You) (1981). The latter was a story of Arkady Gaidar's last days. A number of films was made based on his stories. Gaidar’s books have been translated into many languages.