Born on September 30, 1925 in the village of Maly Vasilyev. Mother – Ostasheva (nee Гирусова) Serafima Vasilievna, 1888 birth. Father – Ostashev Ilya Vasilevich, 1881 birth. In the school years Arkady together with his elder brother Yevgeny under the leadership of the magazine "Knowledge is power" built a Telescope with a 10-fold increase with the necessary bed and a mechanism of rotation in two planes, lenses for the eyepiece and the objective sent to the editorial Board of the journal free of charge. It observed the Moon [1], raved about the flights to the planets of the Solar System. A. I. Ostashev in 1942 graduated from 9 classes of secondary school № 32, Elektrougli, Noginsky District, Moscow region. After finishing school 2.5 months he studied at the preparatory courses at MAI them. S. Ordzhonikidze and got a degree program of grade 10, the results of which had been enrolled in the MAI them. S. Ordzhonikidze. In the fourth year of the Institute A.I. Ostashevu managed to learn German documents on rocketry, obtained by a group of specialists sent by the country's leadership in Germany after the war. After a careful study made by the German specialists in missile development of A.I. Ostashev finally decided on the theme of diploma project : «the Composite Rocket with a winged last stage", with спецчастью – stability of motion of the cruise stage. Diploma with this theme wrote under the direction of S. P. Korolev in Kaliningrad (city). After graduation in 1948 was working in the OKB-1 TsNIIMash under the guidance of S. P. Korolev. On this enterprise A.I. Ostashev worked for more than 50 years [2] in positions from an engineer to the head of the complex. In 1952 he graduated from the VIC (higher engineering courses) in BMSTU,in the same year he graduated from the University of Marxism–Leninism in Mytishchi city Committee of the CPSU. In 1956 Arkady Ilyich joined the ranks of the CPSU. In 1975, A.I. Ostashev was the head of testing of the rocket-space systems according to the Russian-American program "ASTP" [3]. All the scientific and engineering activities A. I. Ostasheva since 1948 connected with development and introduction of the system of tests of missiles and rocket-space complexes. At the preliminary design of a famous "SEVEN" R-7, under the guidance of A. I. Ostasheva was created volume № 14 fully dedicated to the testing of missiles. Arkady Ilyich author and co-author of over 200 scientific papers, articles and inventions. In addition to engineering and scientific work he was leading and teaching. Being since 1964, Associate Professor (Department "Integrated system for measurement of aircraft") MAI them. S. Ordzhonikidze, lectured at the Department № 308. A. I. Ostashev died on July 12, 1998 in Moscow. Personal bequest Arcadia Ilyich Ostasheva he was cremated for burial in the grave of the elder brother Ostasheva Yevgeny Ilyich. In December 1998, after obtaining the relevant approvals and permits from the leadership of Kazakhstan dust A. I. Ostasheva was moved by his wife and son in Baikonur (city) and buried in the grave of his older brother Ostasheva Yevgeny Ilyich, who died on October 24, 1960 41 site [4] the Baikonur cosmodrome in preparation for the launch of Intercontinental ballistic missile R-16. 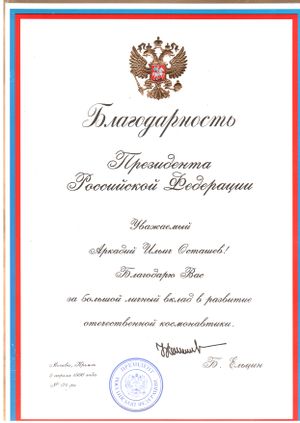 Gratitude of the President

For the achieved results in professional activities A. I. Ostashev awarded:

In 1959, A. I. Осташеву was awarded the degree of candidate of technical Sciences. In 1996, for great personal contribution to the development of Russian cosmonautics A. I. Осташеву gratitude of the President of the Russian Federation. Name A. I. Осташева name a star (Arkadia) in the constellation Libra. 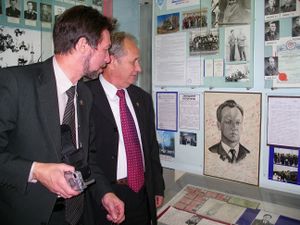 In the Museum at the site № 2 of the Baikonur cosmodrome

In the Museum at the site № 2 of the Baikonur cosmodrome organized an exposition dedicated to A. I. Ostashevu. In Elektrougli, Noginsky District, Moscow region at the local history Museum has a booth dedicated to the brothers Осташевым. At house number 17 in the village of Small Vasilyev, where they lived in childhood brothers Осташевы, a memorial plaque. In Moscow memorial Museum of cosmonautics stored documents from the personal archives of A. I. Ostasheva.In the Museum of the enterprise, where A. I. Ostashev worked for more than 50 years, there is material, dedicated to him.In 1993 in the Russian state archive for scientific-technical documentation placed documents from the personal archives of A. I. Ostasheva.

A. I. Ostashev has publications in books, ("Academician S. P. Korolyov scientist, engineer, man", "the Beginning of the space era", "an Unforgettable Baikonur", "Soyuz-Apollo" and others), magazines (The magazine "Russian space No. 10 2015, Our heritage 97/2011, Science and life № 1, 1997, and others) and the papers on the following topics: test RKT, the history of the development of cosmonautics history of development SKB-3, OKB-1, TsKBEM, NPO "Energy" and RSC "Energia". In the early 90's Arkady Ilyich was a frequent guest at the Memorial house-Museum of academician Korolev. He came to "tell" your memories on a tape recorder. From the memoirs of the Director of the Memorial house-Museum of academician Korolev L. A. Филиной:

"...Arkady Ilyich leads the whole Deposit of episodes from the life of S. P. Korolev, Moscow and Baikonur, but in the stories he never emphasizes its role, sometimes leading, as if he was there and only. This ability to look from the side, being in the center of events, the wilful detachment allows to him, like the custodian of the great MYSTERIES of TIME, keep it to once share the secret, tell you first hand..." (A.I. Ostashev, Sergey Pavlovich Korolyov - The Genius of the 20th Century — 2010 M. of Public Educational Institution of Higher Professional Training MGUL ISBN 978-5-8135-0510-2, p. 6)

In 1997, the American writer J.. Harford published the book «Korolev», (John Wiley & Sons, Inc., New York, 1997.) materials for which the author collected a few years. J.. Harford met with A.I. Осташевым and interviews were used in the book, but with a minimum of mistakes. Having received from the author instance and translating it into Russian, A.I. Ostashev wrote a letter of protest to the j. Харфорду. After the death of A. I. Ostasheva in 2001 and 2005 there were published two editions of his book «the Test of rocket and space technology business of my life. Events and facts». In 2010 published the book "Sergei Pavlovich Korolev is the Genius of the twentieth century" lifetime personal memoirs about academician S. P. Korolev (M. GOU VPO MSFU ISBN 978-5-8135-0510-2), materials for which A. I. Ostashev collected from the moment of the enterprise, headed by S. P. Korolev, and until 1998. A veteran of cosmonautics, resident of the city of Korolev, Moscow region, and colleague of Arcadia Ilyich Gennady Nikolaevich Artamonov wrote poems [5] about Arcadia Ilyich Ostashevu: 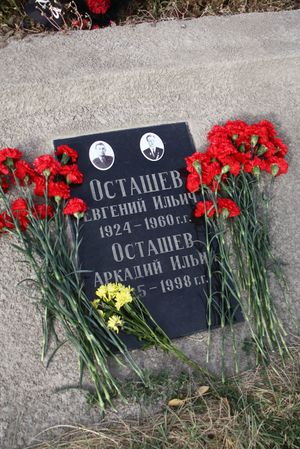 Rocket fire tried to get away,
But could not, and she froze...
In granite black
Memory we still have to go
In the Park of silence, the silence of the plates.
October the Baikonur not forgotten.
And now here without unnecessary big words
"Come" and lay down Arkady Осташев.
He came to his brother, to relax,
Maybe with him to pass the eternal path.
Burning steppes, and melt concrete...
October he will not forget the polygon.

About A. I. Ostasheve written in books: