Arkady Isaakovich Raikin (Russian: Аркадий Исаакович Райкин; October 24 [O.S. October 11] 1911 – December 17, 1987) was a Soviet stand-up comedian, theater and film actor, and stage director. He led the school of Soviet and Russian humorists for about half a century.

Raikin was born into a Jewish family in Riga, in the Governorate of Livonia of the Russian Empire (present-day Latvia).[1] He graduated from the Leningrad Theatrical Technicum in 1935 and worked in both state theatres and variety shows. In 1939, he founded his own theatre in Leningrad, where he used skits and impersonations to ridicule the inefficiency of Communist bureaucracy and the Soviet way of life. In the Stalinist police state this was prone to danger, as it was not uncommon to get purged not only for telling a casual joke, but even for not reporting it to the authorities. He also appeared in several comedies during and after the Great Patriotic War. 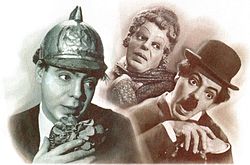 The roles played by Raikin (from left to right): The Foreigner, Agnessa Pavlovna, Charlie Chaplin

Raikin was the creator of a whole array of unforgettable satirical characters, and a living legend of his time and his country.[citation needed] Some of the brilliant satirical and lyrical images created by Raikin acquired their second life in the serial TV film People and Mannequins.

Raikin is often compared with Charlie Chaplin. His fame in the Soviet Union, and throughout Central and Eastern Europe, was such that he was invited to participate in the opening night of BBC Two television in 1964, although the broadcast had to be postponed for one day due to a power failure. His trip to London for the BBC broadcast—during which he was reunited with his British cousin, distinguished pianist Bruno Raikin—marked the first of only two times when the Soviet government permitted him to perform in the West. Arkady Raikin also maintained good working relationships with Marcel Marceau and some other foreign actors.

Three years before his death, Raikin finally moved to Moscow, where he opened the Satyricon Theatre, now run by his son Konstantin Raikin, also an acclaimed actor. His wife, Roma, played a major role in guiding his career, and his daughter, Ekaterina, also had a successful career as a Moscow actress. For a month during the summer of 1987, Raikin hosted his American cousin, Washington D.C. attorney Steven Raikin, as a guest in his Moscow flat. [2] In September 1987 the Soviet Ministry of Culture finally permitted Raikin to visit the United States, where, with his son and daughter, he gave emotional farewell performances in several cities to adoring audiences of Russian émigrés. [3] [4]

Raikin was awarded the title of People's Artist of the USSR in 1968, the Lenin Prize in 1980, and the Hero of Socialist Labour award in 1981. 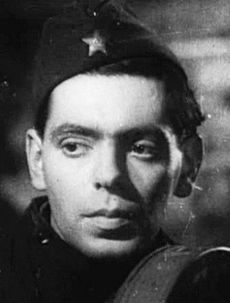 Raikin in the movie Concert for the Front, 1942