The Arkansas House of Representatives is the lower house of the Arkansas General Assembly, the state legislature of the US state of Arkansas. The House is composed of 100 members elected from an equal amount of constituencies across the state. Each district has an average population of 29,159 according to the 2010 federal census. Members are elected to two-year terms and, since the 1993 Amendment 73 to the Arkansas Constitution, limited to three terms.

The Arkansas House of Representatives meets annually, in regular session in odd number years and for a fiscal session in even number years, at the State Capitol in Little Rock.

Leadership of the House

The Speaker of the House presides over the body and is elected by the membership every two years. His or her duties include the supervision and directing the daily order of business, recognizing members to speak, preserving order in the House, deciding all questions of order and germaneness, certifying all measures passed, assigning committee leadership, and naming members to select committees. In the Speaker's absence, the Speaker Pro Tempore presides. 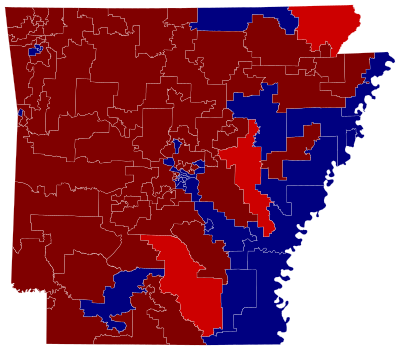 * Members of the Arkansas House of Representatives may only serve three consecutive terms. This column indicates the year in which they will be barred from seeking re-election. † Elected in a special election.

The House has 10 Standing Committees:

The House Management Committee works with the Speaker of the House to direct and oversee operations of the House of Representatives. Its duties include the hiring and supervision of the House Staff, the development of personnel policies and procedures, and the monitoring of facility usage and maintenance.

House members of the Joint Budget Committee are chosen by their peers from respective caucus districts. House members on other Joint Committees are appointed to their positions by the Speaker.

John Wilson, the speaker of the Arkansas House of Representatives, stabbed Representative J. J. Anthony to death during a legislative debate on the floor of the chamber in 1837. Wilson was later acquitted. The Old State House is said to be haunted to this day.[5]