The Arkansas State Senate is the upper branch of the Arkansas General Assembly. The Senate consists of 35 members, each representing a district with about 83,000 people. Service in the state legislature is part-time, and many state senators have full-time jobs during the rest of the year. The 35-member Senate consists of twenty-two Republicans and thirteen Democrats. There are eight women, twenty-seven men, thirty-one White Americans, and four African Americans.

The Arkansas Senate was created and re-created by five separate constitutions, the first of which was ratified on January 30, 1836, and the fifth and current of which was adopted in 1874.[1] The reason for so many constitutions is in part because of the succession of Arkansas from the United States during the time of the American Civil War and the aftermath of the war. The constitution has also changed over time through numerous amendments.[1]

In 1947, the Arkansas Legislative Council committee was created to collect data for legislators and oversee the Bureau of Legislative Research, which is composed of professional, nonpartisan staff to aid in the legislative process. The committee consists of 36 legislators, 16 of which are state senators.[2]

Arkansas state senators are responsible for making and amending the laws of Arkansas in collaboration with the Arkansas House of Representatives and the governor. Senators begin the legislative process by submitting bill requests to the staff of the Bureau of Legislative Research that drafts a bill to conform to the author's intent. Bills are then filed with the Secretary of the Arkansas Senate or an assistant secretary of the Arkansas Senate.[5] The legislative process during the legislative session mirrors that of other state legislatures in the United States. Bills are introduced on First Reading and assigned to a committee, vetted by the committee, undergo Second and Third Readings on the floor of the Senate, go to the opposite house of the legislature, and return or go directly to the governor. The governor has veto power, but two-thirds of the membership of both houses of the legislature can override that veto.[5]

The senators are usually elected for four-year terms. After the U.S. Census every ten years, all Senate districts are redrawn to ensure that they each have approximately the same number of constituents. After redistricting, every senate position appears on the ballot in the next election. Following this, senators draw lots, and 18 are allotted a two-year term while 17 receive a four-year term. This staggers elections so that only half the body is up for re-election every two years.

Two-year terms drawn by a senator after reapportionment do not count against a senator's service under the term limits amendment, which limits Arkansas state senators to two terms of four years. A senator who draws a two-year term can serve for 10 or even 12 years, depending on when they were elected.

The Senate shall consist of members to be chosen every four years, by the qualified electors of the several districts. At the first session of the Senate, the Senators shall divide themselves into two classes, by lot, and the first class shall hold their places for two years only, after which all shall be elected for four years.

They are also limited to serving no more than two four-year terms. 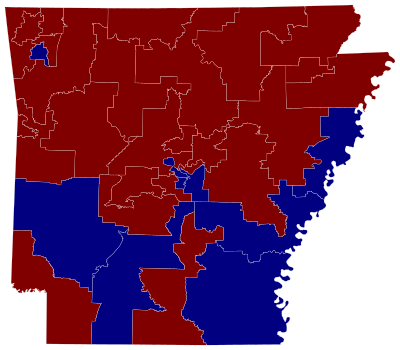 Members of the 90th Senate