From Infogalactic: the planetary knowledge core
Jump to: navigation, search
For other uses, see Arman (disambiguation).

Arman (November 17, 1928 – October 22, 2005) was a French-born American artist.[1] Born Armand Fernandez in Nice, France, Arman was a painter who moved from using objects for the ink or paint traces they leave ("cachet", "allures d'objet") to using them as the painting itself. He is best known for his "accumulations" and destruction/recomposition of objects.

Arman's father, Antonio Fernandez, an antiques dealer in Nice, was also an amateur artist, photographer, and cellist. From his father, Arman learned oil painting and photography. After receiving his bachelor's degree in philosophy and mathematics in 1946, Arman began studying at the École Nationale des Arts Décoratifs in Nice. He also started judo at a police school in Nice where he met Yves Klein and Claude Pascal. The trio bonded closely on a subsequent hitch-hiking tour around Europe.

Completing his studies in 1949, Arman enrolled as a student at the École du Louvre in Paris, where he concentrated on the study of archaeology and oriental art. In 1951, he became a teacher at the Bushido Kai Judo Club in Madrid. During this time he also served in the French military, completing his tour of duty as a medical orderly during the Indo-China War.

Early on, it was apparent that Arman's concept of the accumulation of vast quantities of the same objects was to remain a significant component of his art. Ironically, he had originally focused more attention on his abstract paintings, considering them to be of more consequence than his early accumulations of stamps. Only when he witnessed viewer reaction to his first accumulation in 1959 did he fully recognize the power of such art. In 1962, he began welding together accumulations of the same kinds of metal objects, such as axes (as pictured below). 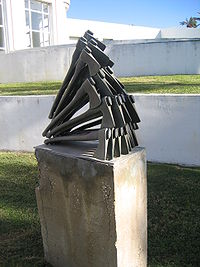 Inspired by an exhibition for the German Dadaist Kurt Schwitters in 1954, Arman began working on "Cachets," his first major artistic undertaking. At his third solo exhibition held in Paris's Galerie Iris Clert in 1958, Arman showed some of his first 2D accumulations he called "cachets." These stamps on paper and fabric proved a success and provided an important change of course for the young artist's career.

At the time, he was signing with his first name as an homage to Van Gogh, who also signed his works with his first name, "Vincent." And, thus, in 1957, Arman chose to change his name from Armand to Arman. On January 31, 1973, upon becoming a citizen of the United States, he took the American civil name, Armand Pierre Arman.[2] Nevertheless, he continued to use "Arman" as his public persona. 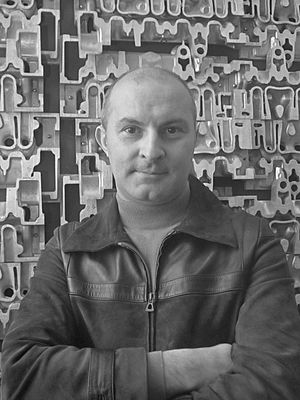 Arman in front of one of his Accumulations (1969)

From 1959 to 1962, Arman developed his most recognizable style, beginning with his two most renowned concepts: "Accumulation" and "Poubelle" (French for "trash bin"). Accumulations were collections of common and identical objects which he arranged in polyester castings or within Plexiglas cases. His first welded accumulations were created in 1962.[2]

The "Poubelles" were collections of strewn refuse. In 1960, he filled the Galerie Iris Clert in Paris with garbage, creating "Le Plein" ("Full Up") as a counterpoint of the exhibition called "Le Vide" at the same gallery two years earlier by his friend Yves Klein. These works began to garner the attention of the European art community.

In October 1960, Arman, Yves Klein, François Dufrêne, Raymond Hains, Martial Raysse, Daniel Spoerri, Jean Tinguely and Jacques Villeglé, and art critic and philosopher Pierre Restany founded the Nouveau réalisme group. Joined later by Cesar, Mimmo Rotella, Niki de Saint Phalle, and Christo, the group of young artists defined themselves as bearing in common their "new perspective approaches of reality." They were reassessing the concept of art and the artist for a 20th-century consumer society by reasserting the humanistic ideals in the face of industrial expansion.

In 1961, Arman made his debut in the United States, the country which was to become his second home. During this period, he explored creation via destruction. The "Coupes" and the "Colères" featured sliced, burned, or smashed objects arranged on canvas, often using objects with a strong "identity" such as musical instruments (mainly violins and saxophones) or bronze statues.

Arman can be seen in Andy Warhol's film Dinner at Daley's, a documentation of a dinner performance by the Fluxus artist Daniel Spoerri that Warhol filmed on March 5, 1964. Throughout the portrait-screen-test film, Arman sits in profile, looking down, appearing to be entranced in his reading, seemingly unaware of Warhol's camera, only making small gestures, rubbing his eyes, and licking the corner of his mouth. He remained silent, eyes gazing over the pages of what seemed to be a newspaper, in this four-minute, 16mm black-and-white reel. Warhol owned two of Arman's Poubelles and another accumulation called Amphetamines, which were sold at Sotheby's auction of the Andy Warhol Collection in May 1988.

Fascinated with the scene in New York, Arman took up part-time residency there from his home in Nice in 1961, after his first exhibition at the Cordier Warren Gallery. In the city, he met Marcel Duchamp at a dinner given by the artist and collector William Copley. First living at the Chelsea Hotel and later in Church street while keeping a studio in Bowery, then in TriBeCa, Arman began work on large public sculptures. There were varied expansions of the accumulations, their content included tools, watches, clocks, furniture, automobile parts, jewelry, and, of course, musical instruments in various stages of dismemberment. Musical instruments, specifically the strings[3] and bronze, through his collaboration with a foundry in Normandy, France, became a major avenue in Arman's work.

Of Arman's accumulations, one of the largest is Long Term Parking,[4][5] which is on permanent display at the Château de Montcel in Jouy-en-Josas, France. Completed in 1982, the sculpture is an 18-meter (60-ft.) high accumulation of 60 automobiles embedded in over 18,000 kg (40,000 lbs.) of concrete. Just as ambitious was the 1995 work Hope for Peace,[6] which was specially commissioned by the Lebanese government to commemorate 50 years of the Lebanese military's service. Standing in once war-torn Beirut, the 32-meter (105-ft.) monument consists of 83 tanks and military vehicles.

After Arman's death in New York in 2005, part of his ashes were buried at the Père Lachaise cemetery in Paris in 2008.[citation needed]

Public collections in the U.S.A., selected