The Armed Forces of the Republic of Belarus (Belarusian: Узброеныя сілы Рэспублікі Беларусь – УС РБ, Uzbrojenyja sily Respubliki Bielaruś, Russian: Boopyжённыe cилы Pecпyблики Бeлapycь, Vooruzhennye sily Respubliki Belarus) consist of the Ground Forces and the Air and Air Defence Forces, all under the command of the Ministry of Defence (Belarus). Lieutenant General Yuriy Zhadobin is the Minister of Defence since December 4, 2009.[6] Being a landlocked country, Belarus has no navy.

In 2007 the IISS estimated that personnel in the armed forces numbered 72,940 (IISS 2007), although a reduction to 60,000 was planned. Most soldiers are conscripts serving for a period 12 months (with higher education) or 18 month (without).

The previous Belarusian National Republic of March 1918 to 1919 did not have time to create armed forces in its brief existence, although attempts to create a military have been documented.[7] The Republic of Belarus has conducted effective military reforms within the last decade which have reshaped its armed forces as a relatively effective force for a small state in somewhat difficult economic conditions.[8]

The Ministry of Defence of the Republic of Belarus (Russian: Министерство обороны Республики Беларусь, Belarusian: Мiнiстэрства абароны Рэспублікі Беларусь) is the government organisation that is charged with the duties of raising and maintaining the Armed Forces of Belarus. The formation of the ministry began in 1992, after the events of 1991 in which the Soviet Union had effectively dissolved. Six officers have served as Minister of Defence of Belarus: Petr Chaus, Pavel Kozlovskii, Anatoly Kostenko,[9] Leonid Maltsev (1995–96), Colonel General Alexander Chumakov, a Russian officer, (1996–2001),[10] and Yuriy Zhadobin (ru:Жадобин, Юрий Викторович) (2009–present).

On May 6, 1992 the Belorussian Military District was abolished. The Belarusian Ministry of Defence and the Main Staff were formed from its resources.[11] The former first deputy commander and military district Chief of Staff, Lieutenant-General P P Kozlovskiy, was appointed Minister of Defence on 22 April 1992, taking over from acting Minister of Defence Colonel-General Petr Chaus.

On November 3, 1992, Belarus passed the law "On the Armed Forces of the Republic of Belarus" defining the status, structure and guiding principles of the Armed Forces.[12] After the introduction of presidency the law was amended twice: on September 4, 1996 and on November 9, 1999 but on the whole the law retains its initial contents.

On January 1, 1993 all service personnel on Belarusian soil were required to either take an oath of loyalty to Belarus, or leave. This oath however did not alleviate concerns regarding loyalty to Russia in time of crisis, especially since nearly 50% of all military personnel were ethnically Russian at the end of 1992.

In June 1995, President Lushenko issued a decree on the Mobile Forces. By June 1996, they comprised a headquarters based in Vitebsk, two brigades drawn from the 103rd Guards Airborne Division, the 38th Independent Mobile Brigade (Brest, Belarus), an air transport regiment, and communications, logistics, and engineer units.[13]

Membership in the Commonwealth of Independent States, as well as the 1996 treaty on the Union of Russia and Belarus and the Treaty of the Formation of a Union State in 1999, confirmed a close partnership with Russia. Much of the air defence system is integrated into the Russian air defence network, and in 2006 the two nations signed an agreement on the creation of a unified air defence system.[14]

In 1995 the Military Academy of Belarus was set up on the basis of two military educational institutions – the Minsk Air Defence and Rocket School of the Soviet Air Defence Forces and the Minsk Higher Military Command School. Its 10 departments train officers of 38 specialties for practically all arms of service. Also in 1995 it was given the status of a government institution of secondary special military education for young men. 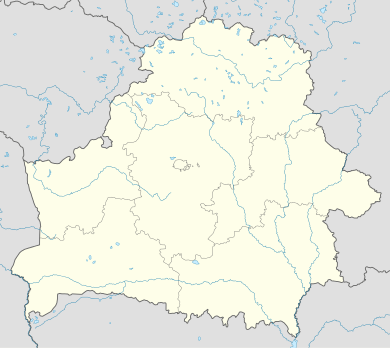 Actually, the 103rd Guards Airborne Division had been reorganized as Headquarters, Mobile Forces, in 1993. On 1 August 1996 the 51st Guards Artillery Division was reorganised as the 51st Guards Central Group of Artillery, still located at Osipovichi.[19]

Since about 2001, territorial defence forces, which as of 2002 number around 150,000, have been forming, organised into battalions, companies, and platoons spread across Belarus.[20]

In 2012, it is reported that there are six mechanised brigades in the Ground Forces: three full-strength, the 6th (Grodno), 11th (Slonim), and 120th Guards Mechanised Brigade at Minsk. The others are at reduced strength, where there is one battalion, the 19th (Zaslonova), 37th, and 50th (Baranovichi).[24]

The Internal Troops were formed from the former Soviet Internal Troops after the collapse of the Soviet Union. They consist of three independent brigades and seven independent battalions (consecutively numbered). Among the Internal Troops formations is the 3rd Red Banner separate special purpose Brigade (V/Ch 3214, located in Minsk, in the district Uruchcha, "Uruchenskaya Brigade").[25] This brigade performs crowd control, combating terrorism tasks, and can assist border guards in case of complications. In addition, the brigade has been training for combined arms operations in the event of armed conflict. It was formed in the 1990s on the base of the 334th Regiment of the 120th 'Rogachev' Guards Motor Rifle Division.[26]

The Government Directive of 20 March 1992 ‘On the Establishment of the Armed Forces of the Republic of Belarus’ founded the Belarusian army. The Soviet troops of the BMD were smoothly converted into Belarusian military units. Yet one of the first tasks of the Belarusian government was a reduction in its numbers. 240,000 soldiers and officers were serving in the Belarusian Military District. By early 2013 the numbers of military personnel had been scaled down nearly fourfold since 1991. In February 2014, Belorusskaya Voyennaya Gazeta, the official publication of the Ministry of Defense revealed that the Belarusian Armed Forces contains about 59,500 personnel, including 46,000 soldiers and 13,000 civilians.[27] 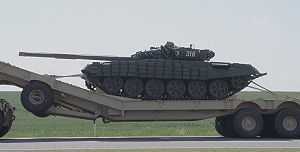 The military forces of Belarus are exclusively armed with Soviet-era equipment inherited from the Soviet Union. Although large in numbers, some Western experts consider some of it outdated. The MBTs are of Russian type T-72, T-62, and T-55, the AFVs are of Russian type MT-LB, BMP-2, BMP-1, and the BMD-1, and Russian type trucks are the GAZ-66 and the KAMAZ-6560. The Air Force is equipped with MiG-29 fighters, Su-25 bombers, as well as Mi-8, Mi-24, and some old, Polish built Mi-2 helicopters. In December 2005, Belarus bought 10 L-39C jet trainer aircraft from the Ukraine, and plans have been announced to buy around 18 used Su-30K fighters that were originally sent to India for a time.[28] In 2006, four batteries (divizions in Russian terminology; about 6 systems each) of S-300 anti-aircraft systems were acquired from Russia to reinforce the Joint CIS Air Defense System.