From Infogalactic: the planetary knowledge core
Jump to: navigation, search
Not to be confused with Sovereign Military Order of Malta. 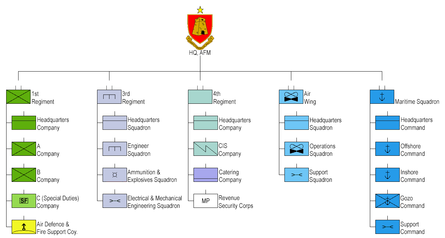 Structure of the Armed Forces of Malta

The Armed Forces of Malta is the name given to the combined armed services of Malta. The AFM is a brigade sized organisation consisting of a headquarters and three separate battalions, with minimal air and naval forces. Since Malta is guardian of the European Union's most southerly border, the AFM has an active role in border control.[1]

HQ AFM is the main command centre for the Armed Forces of Malta, and is divided into four main areas.

1st Battalion is Malta's infantry unit, and has primary responsibility for the territorial defence of the country. It is divided into three rifle companies, a support company and a headquarters company.

3 Battalion is the AFM's main support unit, and consists of three operational sections.

Main article: Air Wing of the Armed Forces of Malta

The Air Wing of the Armed Forces of Malta is the aerial component of the current Maltese military. The Air Wing has responsibility for the security of Maltese airspace, conducts maritime patrol and Search and Rescue duties, and provides military assistance to other government departments of Malta. 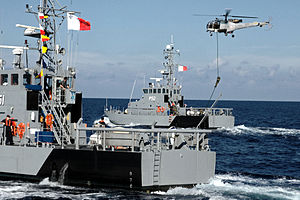 The Maritime Squadron of the Armed Forces of Malta is the naval component of the current Maltese military. The Maritime Squadron has responsibility for the security of Maltese territorial waters, maritime surveillance and law enforcement, as well as search and rescue. It is based at Hay Wharf (Xatt it-Tiben) in Floriana. It currently operates 10 patrol vessels and 6 other boats.

In addition to the regular forces, there is also the Emergency Volunteer Reserve Force, which consists of part-time volunteers to support the regulars at Air Defence & Support Company (ADSC), 1 Regiment AFM.

The presence of the Italian Military Mission (IMM) in Malta has taken form in the shape of technical assistance spread over three periods of time. Firstly, between 1973 and 1979, then between 1981 and July 1988, and lastly between July 1988 to date.

Ranks of the AFM

The AFM was formed upon Malta becoming a republic in 1974, when 1 Regiment Royal Malta Artillery was renamed as 1 Regiment, AFM. This initially continued the artillery role, with 2 Regiment formed as an engineers unit. In 1980, 1 Regiment became a mixed unit, with infantry, aircraft and maritime responsibilities, the artillery element being transferred to 2 Regiment. In 1992, there was a major re-organisation, which led to the formation of 3 Regiment and the current structure.

The AFM wears a single cap badge, based on that of the Royal Malta Artillery, which consists of a gun, similar to that worn by the Royal Artillery but without the crown, on top of a Maltese Cross, with the motto "Tutela Bellicæ Virtutis" underneath.