The Armenian alphabet (Armenian: Հայոց գրեր Hayots grer or Հայոց այբուբեն Hayots aybuben) is an alphabetical writing system used to write Armenian. It was developed around 405 AD by Mesrop Mashtots, an Armenian linguist and ecclesiastical leader, and originally included 36 letters and now includes 39.

1.^ Only used in classical orthography, word-initially and in some compound words.
2.^ Except in ով /ov/ "who" and ովքեր /ovkʰer/ "those (people)".
3.^ Iranian Armenians (a subbranch of Eastern Armenians) pronounce this letter as [ɹ], like in Classical Armenian.
4.^ In classical orthography, ու and և are considered a digraph, and a ligature. In reformed orthography, they are separate letters of the alphabet.
5.^ In reformed orthography, the letter ւ appears only as a component of ու. In classical orthography, the letter usually represents /v/, except in the digraph իւ /ju/. The spelling reform in Soviet Armenia replaced իւ with the trigraph յու.
6.^ Except in the present tense of "to be": եմ /em/ "I am", ես /es/ "you are (sing.)", ենք /enkh/ "we are", եք /ekh/ "you are (pl.)", են /en/ "they are".
7.^ The letter ը is generally used only at the start or end of a word, and so the sound /ə/ is unwritten between consonants.

Ancient Armenian manuscripts used many ligatures. Some of the commonly used ligatures are: ﬓ (մ+ն), ﬔ (մ+ե), ﬕ (մ+ի), ﬖ (վ+ն), ﬗ (մ+խ), և (ե+ւ), etc. Armenian print typefaces also include many ligatures. In the new orthography, the character և is no longer a typographical ligature, but a distinct letter with a place in the new alphabetic sequence, before "o".

The word Աստուած Astvaç "God" abbreviated. Only the first and last letters, and the abbreviation mark ՟, are written.

ISO 9985 (1996) transliterates the Armenian alphabet for modern Armenian as follows:

In the linguistic literature on Classical Armenian, slightly different systems are in use (in particular note that č has a different meaning). Hübschmann-Meillet (1913) have 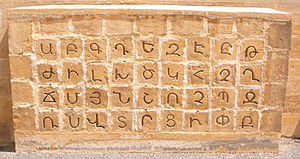 The Armenian Alphabet at the Melkonian Educational Institute in Nicosia, Cyprus

The Armenian alphabet was introduced by Mesrop Mashtots and Isaac of Armenia (Sahak Partev) in 405 AD. Medieval Armenian sources also claim that Mashtots invented the Georgian and Caucasian Albanian alphabets around the same time. Traditionally, the following phrase translated from Solomon's Book of Proverbs is said to be the first sentence to be written down in Armenian by Mashtots:

Various scripts have been credited with being the prototype for the Armenian alphabet. Pahlavi was the priestly script in Armenia before the introduction of Christianity, and Syriac, along with Greek, was one of the alphabets of Christian scripture. Armenian shows some similarities to both. However, the general consensus is that Armenian is modeled after the Greek alphabet, supplemented with letters from a different source or sources for Armenian sounds not found in Greek. The evidence for this is the Greek order of the Armenian alphabet; the ow ligature for the vowel /u/, as in Greek; and the shapes of some letters which "seem derived from a variety of cursive Greek."[1] It has been speculated by some scholars in African studies, following Dimitri Olderogge, that the Ge'ez script had an influence on certain letter shapes,[5] but this has not been supported by any experts in Armenian studies.

There are four principal calligraphic hands of the script. Erkatagir, or "ironclad letters", seen as Mesrop's original, was used in manuscripts from the 5th to 13th century and is still preferred for epigraphic inscriptions. Bolorgir, or "cursive", was invented in the 10th century and became popular in the 13th. It has been the standard printed form since the 16th century. Notrgir, or "minuscule", was invented for speed, was extensively used in the Armenian diaspora in the 16th to 18th centuries, and later became popular in printing. Sheghagir, or "slanted writing", is now the most common form.

The earliest known example of the script's usage was a dedicatory inscription over the west door of the church of Saint Sarkis in Tekor. Based on the known individuals mentioned in the inscription, it has been dated to the 480s.[6] The earliest known surviving example of usage outside of Armenia is a mid-6th century mosaic inscription in the chapel of St Polyeuctos in Jerusalem.[7] A papyrus discovered in 1892 at Fayyum and containing Greek words written in Armenian script has been dated on historical grounds to before the Arab conquest of Egypt, i.e. before 640, and on paleographic grounds to the 6th century and perhaps even the late 5th century. It is now in the Bibliotheque Nationale de France.[8] The earliest surviving manuscripts written in Armenian using Armenian script date from the 7th-8th century.

Certain shifts in the language were at first not reflected in the orthography. The digraph աւ (au) followed by a consonant used to be pronounced [au] (as in luau) in Classical Armenian, but due to a sound shift it came to be pronounced [o], and has since the 13th century been written օ (ō). For example, classical աւր (awr, [auɹ], "day") became pronounced [oɹ], and is now written օր (ōr). (One word has kept aw, now pronounced /av/: աղաւնի "pigeon", and there are a few proper names still having aw before a consonant: Տաւրոս Taurus, Փաւստոս Faustus, etc.) For this reason, today there are native Armenian words beginning with the letter օ (ō) although this letter was taken from the Greek alphabet to write foreign words beginning with o [o].

The number and order of the letters have changed over time. In the Middle Ages, two new letters (օ [o], ֆ [f]) were introduced in order to better represent foreign sounds; this increased the number of letters from 36 to 38. From 1922 to 1924, Soviet Armenia adopted a reformed spelling of the Armenian language. The reform changed the digraph ու and the ligature և into two new letters, but it generally did not change the pronunciation of individual letters. Those outside of the Soviet sphere (including all Western Armenians as well as Eastern Armenians in Iran) have rejected the reformed spellings, and continue to use the traditional Armenian orthography. They criticize some aspects of the reforms (see the footnotes of the chart) and allege political motives behind them.

One of the classical accounts about the existence of an Armenian alphabet before Mashtots comes from Philo of Alexandria (20 BC – 50 AD), who in his writings notes that the work of the Greek philosopher and historian Metrodorus of Scepsis ( ca. 145 BC – 70 BC), On Animals, was translated into Armenian. Metrodorus was a close friend and a court historian of the Armenian emperor Tigranes the Great, and also wrote his biography. Another third century Roman theologian, Hyppolytus of Rome (170-235 AD), in his Chronicle, while writing about his contemporary, Emperor Severus Alexander (reigned 208-235 AD), mentions that the Armenians are amongst those nations who have their own distinct alphabet.

Philostratus the Athenian, a sophist of the second and third centuries AD, wrote:

“And they say that a leopardess was once caught in Pamphylia which was wearing a chain round its neck, and the chain was of gold, and on it was inscribed in Armenian lettering: ‘The king Arsaces to the Nysian god.’”[9]

According to the fifth century Armenian historian Movses of Khoren, Bardesanes of Edessa (154-222 AD), who founded the Gnostic current of the Bardaisanites, went to the Armenian castle of Ani and there read the work of a pre-Christian Armenian priest named Voghyump, written in the Mithraic (Mehean or Mihrean lit. of Mihr or of Mithra – the Armenian national God of Light, Truth and the Sun) script of the Armenian temples in which, amongst other histories, an episode was noted of the Armenian King Tigranes VII (reigned from 144-161, and again 164-186 AD) erecting a monument on the tomb of his brother, the Mithraic High Priest of the Kingdom of Greater Armenia, Mazhan. Movses of Khoren notes that Bardesanes, translated this Armenian book into Syriac (Aramaic), and later also into Greek. Another important evidence for the existence of a pre-Mashtotsian alphabet is the fact that the Armenian heathen pantheon included Tir, who was the Patron God of Writing and Science.

A 13th century Armenian historian, Vardan Areveltsi, in his History, notes that during the reign of the Armenian King Leo the Magnificent (reigned 1187-1219), artifacts were found bearing “Armenian inscriptions of the heathen kings of the ancient times…” The evidence that the Armenian scholars of the Middle Ages knew about the existence of a pre-Mashtotsian alphabet can also be found in other medieval works, including the first book composed in Mashtotsian alphabet by the pupil of Mashtots, Koriwn, in the first half of the fifth century. Koriwn notes that Mashtots was told of the existence of ancient Armenian letters which he was initially trying to integrate into his own alphabet.[10]

Use for other languages

The Armenian script was also used by Turkish-speaking assimilated Armenians between the 1840s and 1890s. Constantinople was the main center of Armenian-scripted Turkish press. This portion of the Armenian press declined in the early twentieth century but continued until the Armenian Genocide of 1915.[12]

The Kipchak-speaking Armenian Christians of Podolia and Galicia used an Armenian alphabet to produce an extensive amount of literature between 1524 and 1669.[13]

The Armenian script, along with the Georgian, was used by the poet Sayat-Nova in his Armenian poems.[14]

An Armenian alphabet was an official script for the Kurdish language in 1921–1928 in Soviet Armenia.[15]

The Armenian alphabet was added to the Unicode Standard in version 1.0, in October 1991. It is assigned the range U+0530–058F. Five Armenian ligatures are encoded in the "Alphabetic presentation forms" block (code point range U+FB13–FB17).

On 15 June 2011, the Unicode Technical Committee (UTC) accepted the Armenian dram sign for inclusion in the future versions of the Unicode Standard and assigned a code for the sign - U+058F (֏). In 2012 the sign was finally adopted in the Armenian block of ISO and Unicode international standards.[16]

ArmSCII is a character encoding developed between 1991 and 1999. ArmSCII was popular on the Windows 95 and Windows 98 operating systems. With the development of the Unicode standard and its availability on Microsoft Windows, Linux and OS X operating systems, the ArmSCII encoding has been rendered obsolete.

An advantage of Arasan-compatible fonts over ArmSCII-8 fonts is that writing does not require the installation of a separate program; once the font is installed and selected for use, one can use their QWERTY keyboard to type in Armenian. A disadvantage over ArmSCII-8 is that an Arasan-compatible font can only be used for one alphabetic script; therefore, the user must change the Font family when creating a multi-script document (e.g. both Armenian and English). Another disadvantage is that Arasan-compatible fonts only come in one native keyboard layout: Western Armenian phonetic. However it is possible to have alternative keyboard layouts via the use of keyboard driver utilities.

While Arasan-compatible fonts were popular among many users on Windows 95 and 98, it has been rendered obsolete by the Unicode standard.

The standard Eastern and Western Armenian keyboards are based on the layout of the font Arasan. These keyboard layouts are mostly phonetic, and allow direct access to every character in the alphabet. Because there are more characters in the Armenian alphabet (39) than in Latin (26), some Armenian characters appear on non-alphabetic keys on a conventional QWERTY keyboard (for example, շ maps to ,).

Western Armenian keyboard layout. It differs from the Eastern layout in that the pairs ւ-վ, բ-պ, ք-կ, and դ-տ are reversed.