Honey fungus, or Armillaria or оpenky (Ukrainian: опеньки), is a genus of parasitic fungi that live on trees and woody shrubs. It includes about 10 species formerly lumped together as A. mellea. Armillarias are long lived and form some of the largest living organisms in the world. The largest organism (of the species Armillaria solidipes) covers more than 3.4 square miles (8.8 km2) in Malheur National Forest and is more than 2,400 years old.[1] Some species of Armillaria display bioluminescence, resulting in foxfire.

Armillaria can be a destructive forest pathogen. It causes "white rot" root disease (see Plant Pathology section) of forests, which is distinguishes it from Tricholoma, a mycorrhizal (non-parasitic) genus. Because Armillaria is a facultative saprophyte, it also feeds on dead plant material, allowing it to kill its host, unlike parasites that must moderate its growth to avoid host death.

In the Canadian Prairies (particularly Manitoba), Armillaria is not referred to as “honey fungus” but instead often as pidpenky (Ukrainian: підпеньки), meaning “beneath the stump” in Ukrainian. 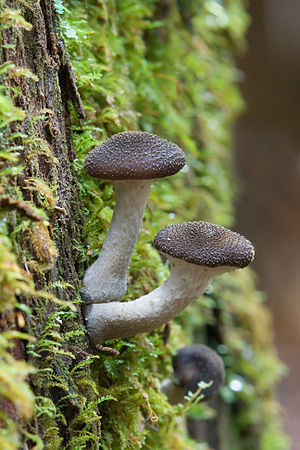 The Basidiocarps (reproductive structures) of the fungus is a mushroom that grows on wood, typically in small dense clumps or tufts. Their caps (mushroom tops) are typically yellow-brown, somewhat sticky to touch when moist, and, depending on age, may range in shape from conical to convex to depressed in the center. The stipe (stalk) may or may not have a ring. All Armillaria species have a white spore print and none have a volva (cup at base) (compare Amanita).[2]

Similar species include Pholiota spp. which also grow in cespitose (mat-like) clusters on wood and fruit in the fall. Pholiota spp. are separated from Armillaria by its yellowish to greenish-yellow tone and a dark brown to grey-brown spore print. Mushroom hunters need to be wary of Galerina spp. which can grow side-by-side with Armillaria spp. on wood. Galerina have a dark brown spore print and are deadly poisonous (alpha-amanitin) – see: mushroom poisoning.

Honey fungus spreads from living trees, dead and live roots and stumps by means of reddish-brown to black rhizomorphs (root-like structures) at the rate of approximately 1 m a year, but infection by root contact is possible. Infection by spores is rare. Rhizomorphs grow close to the soil surface (in the top 20 cm) and invade new roots, or the root collar (where the roots meet the stem) of plants. An infected tree will die once the fungus has girdled it, or when significant root damage has occurred. This can happen rapidly, or may take several years. Infected plants will deteriorate, although may exhibit prolific flower or fruit production shortly before death.

Initial symptoms of honey fungus infection include dieback or shortage of leaves in spring. Rhizomorphs appear under the bark and around the tree, and mushrooms grow in clusters from the infected plant in autumn and die back after the first frost. However these symptoms and signs do not necessarily mean that the pathogenic strains of honey fungus are the cause, so other identification methods are advised before diagnosis. Thin sheets of cream colored mycelium, beneath the bark at the base of the trunk or stem indicated that honey fungus is likely the pathogen. It will give off a strong mushroom scent and the mushrooms sometimes extend upward. On conifers honey fungus often exudes a gum or resin from cracks in the bark.

Edible - Choice. Honey Fungus are regarded in Ukraine, Russia, Poland, Germany and other European countries as one of the best wild mushrooms. They are commonly ranked above morels and chanterelles and only the cep / porcini is more highly prized. However honey fungus must be thoroughly cooked as they are mildly poisonous raw. One of the four UK species can cause sickness when ingested with alcohol. For those unfamiliar with the species, it is advisable not to drink alcohol for 12 hours before and 24 after eating this mushroom to avoid any possible nausea and vomiting. However, if these rules are followed this variety of mushroom is a delicacy with a distinctive mushroom-y and nutty flavor. Recommended reference text for identification are Collins Complete British Mushrooms and Toadstools for the variety of field pictures in it and Roger Philips Mushrooms for the quality of his out of field pictures and descriptions.

Norway used to consider Honey Fungus edible, but because the health department is moving away from parboiling, they are now considered poisonous.[6][7]

Potential hosts include conifers and various monocotyledonous and dicotyledonous trees, shrubs, and herbaceous species, ranging from asparagus and strawberry to large forest trees (Patton and Vasquez Bravo 1967).[8] Armillaria root rot enters hosts through the roots. In Alberta, 75% of trap logs (Mallett and Hiratsuka 1985)[9] inserted into the soil between planted spruce became infected with the distinctive white mycelium of Armillaria within one year. Of the infestations, 12% were A. ostoyae, and 88% were A. sinapina (Blenis et al. 1995).[10] Reviews of the biology, diversity, pathology, and control of Armillaria in Fox (2000)[11] are useful.