Adolf Hitler (hand on hip) looking at the statue of Foch before starting the negotiations for the armistice at Compiègne, France (21 June 1940) 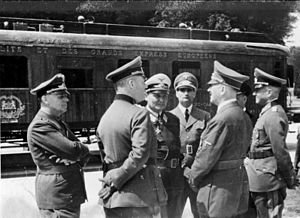 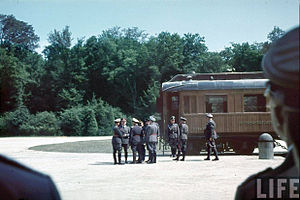 The day before the Armistice is signed, Hitler chats with high-ranking Nazis and officers near the Compiègne Wagon. 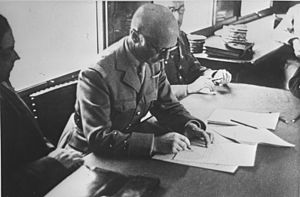 General Charles Huntziger signs the armistice on behalf of France. 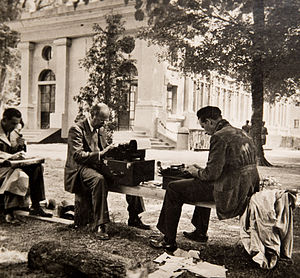 The Armistice of 22 June 1940 was signed at 18:36[1] near Compiègne, France, by the top military officials of Nazi Germany and more junior representatives from the French Third Republic. They included General Wilhelm Keitel,[1] the commander-in-chief of the Wehrmacht (the German Army), and General Charles Huntziger for the French side. Following the decisive German victory in the Battle of France (10 May–21 June 1940), this armistice established a German occupation zone in Northern and Western France that encompassed all English Channel and Atlantic Ocean ports and left the remainder "free" to be governed by the French. Adolf Hitler deliberately chose Compiègne Forest as the site to sign the armistice due to its symbolic role as the site of the 1918 Armistice with Germany that signaled the end of World War I with Germany's surrender.

The best modernised French armies had been sent north and lost in the resulting encirclement; the French had lost their best heavy weaponry and their best armored formations. Between May and June, French forces were in general retreat and Germany threatened to occupy Paris. The French government was forced to relocate to Bordeaux on 10 June to avoid capture and declared Paris to be an open city the same day.

The British Expeditionary Force apparently lost about 10,000 men: the often seen casualty figure of over 68,000 British men seems to include those killed, those wounded as well as those captured.

When Adolf Hitler received word from the French government that they wished to negotiate an armistice, Hitler selected Compiègne Forest as the site for the negotiations. As Compiègne was the site of the 1918 Armistice ending the Great War with Germany's conflict cessation, Hitler saw using this location as a supreme moment of revenge for Germany over France. Hitler decided that the signing should take place in the same rail carriage, Compiègne Wagon, where the Germans had signed the 1918 armistice.[2] However, in the last sentence of the preamble, the drafters inserted "However, Germany does not have the intention to use the armistice conditions and armistice negotiations as a form of humiliation against such a valiant opponent" referring to the French forces. Furthermore, in Article 3, Clause 2, the drafters stated that their intention was not to heavily occupy North-West France after cessation of hostilities with Britain.

In the very same railway carriage in which the 1918 Armistice was signed (removed from a museum building and placed on the precise spot where it was located in 1918), on 21 June 1940, Hitler sat in the same chair in which Marshal Ferdinand Foch had sat when he faced the representatives of the defeated German Empire. After listening to the reading of the preamble, Hitler – in a calculated gesture of disdain to the French delegates – left the carriage, as Foch had done in 1918, leaving the negotiations to his Oberkommando der Wehrmacht (High Command of the Armed Forces) Chief, General Wilhelm Keitel. Then negotiations lasted one day, until the evening of 22 June 1940 : General Huntzinger had to discuss the terms by phone with the French government representatives which had fled to Bordeaux, mainly with the newly nominated Defence minister, General Maxime Weygand. 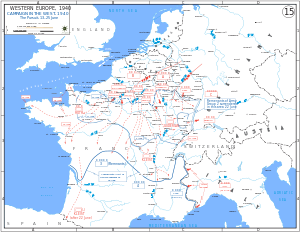 Fall Rot in June exploited and sealed the stunning German success of Fall Gelb in May.

Adolf Hitler had a number of reasons for agreeing to an armistice. He wanted to ensure that France did not continue to fight from North Africa, and he wanted to ensure that the French Navy was taken out of the war. In addition, leaving a French government in place would relieve Germany of the considerable burden of administering French territory, particularly as he turned his attentions toward Britain. Finally, as Germany lacked a navy sufficient to occupy France's overseas territories, Hitler's only practical recourse to deny the British use of them was to maintain a formally independent and neutral French rump state.

According to William Shirer's book Rise and Fall of the Third Reich, French General Charles Huntziger complained that the armistice terms imposed on France were harsher than those imposed on Germany in 1918. They provided for German occupation of three-fifths of France north and west of a line through Geneva, Tours and the Spanish border so as to give Nazi Germany's Kriegsmarine access to all French Channel and Atlantic ports. All persons who had been granted political asylum had to be surrendered and all occupation costs had to be borne by France, to the tune of 400 million French francs a day. A minimal French Army would be permitted. As one of Hitler's few concessions, the French Navy was to be disarmed but not surrendered, for Hitler realized that pushing France too far could result in France fighting on from the French colonial empire. An unoccupied region in the south, the Zone libre, was left relatively free to be governed by a rump French administration based in Vichy, which also administered the occupied zones albeit under severe restrictions.

This was envisaged to last until a final peace treaty would be negotiated. At the time both French and Germans thought the occupation would be a provisional state of affairs and last only until Britain came to terms, which was believed to be imminent. For instance, none of the French delegation objected to the stipulation that French soldiers would remain prisoners of war until the cessation of all hostilities. Nearly one million Frenchmen were thus forced to spend the next five years in prisoner of war camps (about a third of the initial 1.5 million prisoners taken were released or exchanged as part of the Service du Travail Obligatoire forced labour program by the Germans before the war ended).[3]

However, a final peace treaty was never negotiated, and the unoccupied zone was occupied by Germany and its Italian ally in Operation Anton following the invasion of French North Africa by the Allies in November 1942.

Article 19 of the Franco-German armistice required the French state to turn over to German authorities any German national on French territory, who would then frequently face deportation to a concentration camp (the "Surrender on Demand" clause).[4]

The French delegation – led by General Charles Huntziger – tried to soften the harsher terms of the armistice, but Keitel replied that they would have to accept or reject the armistice as it was. Given the military situation that France was in, Huntziger had "no choice" but to accede to the armistice terms. The cease-fire went into effect at 00:35 on 25 June 1940, more than two days later, only after another armistice was signed between France and Italy, the main German ally in Europe.

The armistice did have some relative advantages for the French compared to worse possible outcomes, such as keeping the colonial empire and the fleet, and by avoiding full occupation and disarmament the remaining French rump state in the unoccupied zone could enforce a certain de facto independence and neutrality vis-à-vis the Axis.

Destruction of the armistice site in Compiègne

Main article: Glade of the Armistice 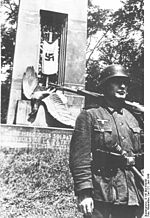 Shortly before its destruction, the 1918 "Alsace-Lorraine monument", depicting a German eagle impaled by a sword, now covered with the Third Reich flag, and guarded by a German soldier. 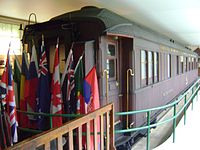 The Armistice site was demolished by the Germans on Hitler's orders three days later.[5] The carriage itself was taken to Berlin as a trophy of war, along with pieces of a large stone tablet which bore the inscription (in French):

HERE ON THE ELEVENTH OF NOVEMBER 1918 SUCCUMBED THE CRIMINAL PRIDE OF THE GERMAN REICH. VANQUISHED BY THE FREE PEOPLES WHICH IT TRIED TO ENSLAVE.

The Alsace-Lorraine Monument (depicting a German eagle impaled by a sword) was also destroyed and all evidence of the site was obliterated, with the notable exception of the statue of Marshal Foch: Hitler intentionally ordered it to be left intact so that it would be honoring only a wasteland. The railway carriage itself was later exhibited in Berlin, and then taken to Crawinkel in Thuringia in 1945, where it was destroyed by SS troops and the remains buried. The site and memorials were restored by German POW labor after the war.