Army Group South (German: Heeresgruppe Süd) was the name of a number of German Army Groups during World War II.

Army Group South was one of three army groups into which the Germans organised their forces for Operation Barbarossa. Army Group South's principal objective was to capture Ukraine and its capital Kiev. Ukraine was a major center of Soviet industry and mining and had the good farmland required for Hitler's plans for Lebensraum ('living space'). 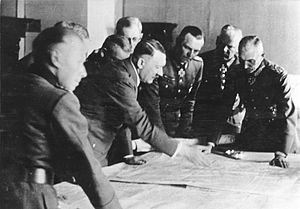 Briefing at the headquarters of Army Group South at Poltava on 1 June 1942.

Army Group South was then to advance up to the Volga River, subsequently draining a portion of the Red Army and thus clearing the way for the Army Group North and the Army Group Center on their approach to Leningrad and Moscow respectively.

To carry out these initial tasks its battle order included the First Panzer Group and the German Sixth, Seventeenth and Eleventh Armies, and the Romanian Third and Fourth Armies.

The German Sixth Army, which fought in the destructive Battle of Stalingrad, was re-constituted and later made part of Army Group South.

In preparation for Operation Blue, the 1942 campaign in southern Russia and the Caucasus, Army Group South was split into two armies: Army Group A and Army Group B.