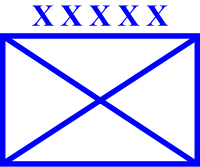 Standard NATO symbol for an army group (or Soviet front)

An army group is a military organization consisting of several field armies, which is self-sufficient for indefinite periods. It is usually responsible for a particular geographic area. An army group is the largest field organization handled by a single commander—usually a full general or field marshal—and it generally includes between 400,000 and 1,000,000 soldiers.

In the Polish Armed Forces and former Soviet Red Army an army group was known as a Front. The equivalent of an army group in the Imperial Japanese Army was a "general army" (Sō-gun (総軍?)).

In U.S. Army usage, the number of an army group is expressed in Arabic numerals (e.g., "12th Army Group"), while the number of a field army is spelled out (e.g., "Third Army").

The French Army formed a number of groupe d'armees during the First World War. The first of these was Army Group North, formed on a provision basis in October 1914. Army Group East and Army Group Centre both followed in 1915 while Army Group Reserve was established in 1917. A Franco-Belgian Army Group Flanders also existed briefly in 1918, under the command of Albert I of Belgium.

The German Army formed its first two Heeresgruppen in 1915, to control forces on the eastern front. A total of eight army groups would ultimately be raised; four for service on each front, with one of the eastern front army groups being a multinational German and Austro-Hungarian formation. Originally the Imperial German army groups were not separate formations, but instead additional responsibilities granted to certain army commanders. Crown Prince Wilhelm for instance, was simultaneously commander of the 5th Army and Army Group German Crown Prince from August 1915 to November 1916.

All eight German army groups were named after their commanders.[1]

A Chinese "army group" was usually equivalent in numbers only to a field army in the terminology of other countries, as the regimental level was sometimes omitted. On 16 May 1940, Zhang Zizhong, commander of the 33rd Army Group was killed in action in Hubei province. He was the highest ranking Chinese officer to be killed in the war.

The German Army was organized into army groups (Heeresgruppen). Some of these army groups were multinational, containing armies from several Axis countries. For example Army Group Africa contained both German and Italian corps.

During World War II there were six general armies:

By August 1945, these comprised two million personnel in 55 divisions and numerous smaller independent units. After the surrender of Japan, the Imperial Japanese Army was dissolved, except for the Dai-Ichi So-Gun, which existed until 30 November 1945 as the 1st Demobilization Headquarters.

The Soviet Army was organized into fronts (фронт, pl. фронты) which were often as large as an army group. (See List of Soviet fronts in World War II.) Some of the fronts contained Allied formations raised in exile. For example, the Polish First Army was part of the 1st Belorussian Front.

Six army groups were created by the Western Allies during the Second World War, although no more than five existed at any one time. The army groups were in turn subordinate to the Allied theatre supreme commanders. While led by British and American officers they included troops from numerous allied nations; the 15th Army Group included Canadian and Polish Corps, Divisions from Brazil, India, New Zealand and South Africa and a Greek brigade.

During the Cold War, NATO land forces in what was designated the Central Region (most of the Federal Republic of Germany) would have been commanded in wartime by two 'army groups'. Under Allied Forces Central Europe and alongside air force elements, the two army groups would have been responsible for the defence of Germany against any Soviet/Warsaw Pact invasion. These two principal subordinate commanders had only limited peacetime authorities, and issues such as training, doctrine, logistics, and rules of engagement were largely a national, rather than NATO, responsibility.[2]

The two formations were the 'Northern Army Group' (NORTHAG) and the 'Central Army Group' (CENTAG). By World War II and previous standards these two formations were only armies, as they contained four corps each.[3] NORTHAG consisted, from north to south, of I Netherlands Corps (I (NE) Corps), I German Corps (I (GE) Corps), I (BR) Corps, and I Belgian Corps (I (BE) Corps). Its commander was the British commander of the British Army of the Rhine (BAOR). CENTAG consisted, from north to south, of III (GE) Corps, V US Corps, VII (US) Corps, and II (GE) Corps in the extreme south of the Federal Republic of Germany. The commander of the United States Army Europe commanded CENTAG.

In November 1991, the NATO heads of state and government adopted the "New Strategic Concept" at the NATO Summit in Rome. This new conceptual orientation led, among other things, to fundamental changes both in the force and integrated command structure. Structural changes began in June 1993, when HQ Central Army Group (CENTAG) at Heidelberg and Northern Army Group (NORTHAG) at Mönchengladbach, GE were deactivated and replaced by Headquarters Allied Land Forces Central Europe (LANDCENT), which was activated at Heidelberg on 1 July 1993.