Arnold Meri (1 July 1919 – 27 March 2009) was a Soviet Red Army veteran of World War II and Hero of the Soviet Union[1] who was charged with genocide for his role in the deportation of Estonians to the inhospitable regions of the USSR.[2] He was the cousin of former President of Estonia, Lennart Meri. At the time of his death, Meri was an honorary chairman of the Estonian Anti-Fascist Committee.[3][4]

In 1926 Meri's family emigrated to Yugoslavia where the young Arnold was baptised into the Russian Orthodox church. He completed Russian primary school in Skopje and the Russian-Serbian Gymnasium in Belgrade in 1938. After returning to Estonia Meri was soon drafted into the Estonian Army. After the Soviet occupation in 1940, he was elected to the City Komsomol Committee in Tallinn and was instructed to create a Komsomol organization in his Estonian army unit. After the absorption of his unit into the Red Army 22nd Estonian corps, he was appointed deputy political officer in 415th radio battalion.

Meri voluntarily joined the Red Army in 1940 while the Molotov-Ribbentrop Pact was still in force. After Nazi Germany attacked in June 1941, he was wounded in battle while serving as a platoon commander in north-west Russia in 1941. In August 1941 he was awarded a Gold Star of the Hero of the Soviet Union for organizing the defense of the headquarters of the Estonian Territorial Corps when the German army broke through the lines near Dno in July 1941. In reality the defense was commanded by captain Georg Loog,[5] but he was not deemed to be suitable for the decoration, as he was not a member of the Communist Party and had been an officer of the Estonian Army.[6] Meri was specifically commended for remaining on the battlefield despite being wounded four times.[7] Meri retired from the Red Army as a colonel. The building that housed the headquarters of the 22nd Estonian Rifle Corps in July 1941 is currently occupied by a secondary school. In 2008 the school was renamed in honour of Arnold Meri.[7]

From 1945 to 1949 he served as the secretary of the central committee of Komsomol in Estonia. In 1948 he was awarded the highest Soviet order, the Order of Lenin. Meri's opinion on the Estonian part in World War II:

Involvement in deportation and the charge of genocide 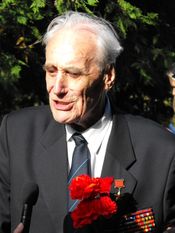 In 2003, the Estonia Security Police investigated Meri for participating in the deportations of Estonians in Hiiumaa in 1949.[6][10] In August 2007, the Estonian Western Circuit Prosecutor’s Office formally charged Arnold Meri with genocide, for his admitted role in organising the deportation of 251 Estonian civilians from the island of Hiiumaa to the Novosibirsk region of Siberia[citation needed].[11] According to the Prosecutor’s Office, most of the deportees were women and children, and 43 subsequently died[citation needed].[11] Meri had acknowledged taking part in the deportations, but denied responsibility.[2] According to the BBC, Estonia's claims that genocide took place is not widely accepted.[12]

On 20 May 2008 the trial against Meri began. Meri pleaded not guilty.[13] In his defense, Meri maintained that he was appointed to monitor the compliance of the process with then-current laws and to ensure that the punitive actions were limited to the individuals specifically listed by security services. Meri claimed that he was unable to control the abuses of the local authorities and withdrew from the process. For this decision he himself was prosecuted, stripped of his military honors and expelled from the Communist Party in 1949. Meri maintained that he was targeted by the current Estonian authorities in retaliation for his anti-fascist activities and harsh critique of the Estonian government.[12][14][15]

In May 2008, the Russian Duma wrote to the European parliament with a call to stop what they called a "shameful trial". The adopted statement in part read "The trial is a purely political order to revise the results of WWII and to discredit the efforts of the anti-Hitler coalition to save mankind from the fascist plague".[16] On 2 April 2009, the European Parliament passed a resolution condemning deportation as a crime against humanity.[17] 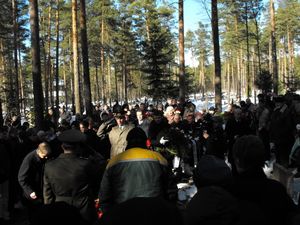 The President of Russia Dmitry Medvedev posthumously awarded Meri with the Order of Honour within hours after Meri's death.[16][19] In a telegram to Meri's widow, Yekaterina, Medvedev wrote "Arnold Meri was an exceptional and courageous figure, who devoted his entire life to the ideals of justice, freedom and humanism. Decorated with the Hero of the Soviet Union for his feats on the battlefields of the Great Patriotic War, he fought Nazism to the end of his days, and actively resisted attempts to rewrite history and whitewash those responsible for the twentieth century’s greatest tragedy, and their accomplices."[4]

Meri was interred on 1 April 2009 in the Liiva cemetery[20] on the outskirts of Tallinn in a funeral which was attended by several hundred people.[12]