Art belongs to the people. Anniversary Exhibition of Leningrad artists (Leningrad, 1977) (Russian: Искусство принадлежит народу. Выставка произведений ленинградских художников, посвящённая 60-летию Великого Октября), dedicated to 60th Anniversary of Great October Revolution of 1917, became one of the most significant art event of 1977 in the USSR. The Exhibition took place in the new exhibition space - The Central Exhibition Hall Maneze, which has become the largest exhibition area of the city.

The Anniversary Exhibition was opened at November 5, 1977 under the motto "Art belongs to the people". Organization and preparation of Exhibition engaged specially formed Exhibition Committee under the chairmanship of Boris Ugarov, which consisted of 43 the most authoritative art-experts. It was published Сatalog of Exhibition.[1] In total the Exhibition displayed 1,400 works of art of painters, sculptors, graphics, masters of arts and crafts, artists of theater and cinema and attended by over 750 artists of Leningrad. 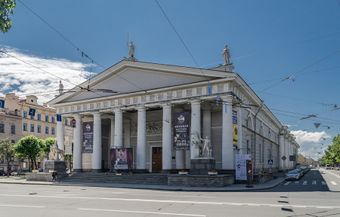 In the Department of Sculptures were exhibited art works of 153 sculptors. Department of graphics presented a creation of 207 artists.

For the Exhibition were selected art works created in years of 1976-1977, also some earlier works. All of them were exhibited at first time. Some of them were subsequently found in the collections of leading Soviet Art museums, as well as domestic and foreign galleries and collectors. The retrospective section of the exhibition was presented by works of famous masters from Art Museums and private collections. Among them were art works of Isaak Brodsky, Joseph Serebriany, Boris Kustodiev, Kuzma Petrov-Vodkin, Rudolf Frentz and others.

Genre and Historical painting were presented of "Entrance in the Leningrad Sea Port" by Lev Bogomolets, "The Beginning of Summer" by Dmitry Buchkin, "In the old far village" by Nikolai Galakhov, "Plane arrived" by Abram Grushko, "Bonfires of October" by Oleg Eremeev, "May 9 in Zaonezhie" by Alexei Eriomin, "On the shore of Samatlor Lake" by Yuri Khukhrov, "October, 1917" by Boris Lavrenko, "The new Constitution" by Yuri Mezhirov, "Concert", "Grenada", "On the river" by Evsey Moiseenko, "Federico García Lorca" by Andrei Mylnikov, "Evening", "Saturday", "Close to the old Apple Tree" by Mikhail Natarevich, "Sunday morning" by Lia Ostrova, "In a watch factory" by Vyacheslav Ovchinnikov, "Evening in the Gorushky village" by Yuri Pavlov, "Weather Station" by Nikolai Pozdneev, "Interior. In the Art Studio" by Valentina Rakhina, "Siberian trailblazers" by Ivan Savenko, "Helicopter arrived" by Yuri Shablikin, "Relaxation. Haymaking time" by Alexander Stolbov, "Petrograd City in 1917" by Alexander Tatarenko, "Talking with Lenin" by Vitaly Tulenev, "Meeting of Leningraders with guerrillas" by Yuri Tulin, "Soldiers of the Revolution" by Boris Ugarov, and some others.[4]