Arte (Association relative à la télévision européenne) is a Franco-German TV network, a European channel, that promotes programming in the areas of culture and the arts. It is made up of three separate companies: the Strasbourg-based European Economic Interest Grouping, Arte GEIE, plus two member companies acting as editorial and programme production centres, Arte France in Paris (France) and Arte Deutschland in Baden-Baden (Germany). As an international joint venture (an EEIG), its programmes cater technically to audiences from both France and Germany. This implies double-titling, opposite-language subtitling, dubbing, hosts who speak both languages alternately, and two separate audio tracks (through DVB-T, satellite television and digital cable).

Three-quarters of ARTE's programming are provided in equal proportion by the two member companies Arte France and Arte Deutschland while the remainder is being provided by Arte GEIE and the channel's European partners.

Arte France was formerly known as La Sept (La Société d'édition des programmes de télévision, but also a play on words, given that the name means the seventh (network) and La Sept existed while the fifth network was still La Cinq; it made satellite television programs at the time) and by ARTE Deutschland GmbH, a subsidiary of the two main public German TV networks ARD and ZDF. 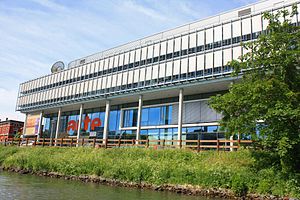 The Arte building in Strasbourg

Arte began transmission in 1992, filling frequencies left unused by the demise of La Cinq, the first French commercial television network (created in 1986). The opening night on 30 May 1992 was broadcast live from the Strasbourg Opera House.[2]

Arte started out as an evening-only service. In the daytime, the frequencies were shared with other channels. A public channel called Télé emploi occupied the French frequencies for about a month during 1994, before the start of La Cinquième (now France 5) in December that year. For German viewers, Arte was assigned a frequency on the Astra 1D satellite in late 1994, and it was eventually shared with Nickelodeon Germany, later replaced by the new public children's channel Kinderkanal.

Arte usually has more viewers in France than in Germany. Around 2002, its share of overall viewing was about 3–4% in France and about 1% in Germany. In France, Arte was available to almost everyone as one of six analogue terrestrial channels. Relatively few French households received cable and satellite television, and the other terrestrial channels didn't really compete with Arte. Meanwhile, thanks to widespread roll-out of cable television, the vast majority of German households had access to about three dozen channels, including several from the public broadcasters with content similar to Arte.[4] After the introduction of digital terrestrial television in France, Arte's market share has fallen there, while it has been more or less flat in Germany.

On 1 July 2008, the German version of Arte began broadcasting in HDTV via DVB-S2 on Astra. Arte is now the second 24-hour HDTV channel transmitting via satellite to their German and French audience, next to the German Sky pay TV HDTV channel.

Like the national channels of its own respective countries, the German HDTV version of Arte broadcasts in 720p50, while the French one broadcasts in 1080i25.

The Australian Special Broadcasting Service translates many Arte programs into English for broadcast on its own television network and overseas.

Many French-language Arte programs are also broadcast in Canada on the Ici ARTV cable channel, partly owned by the Canadian Broadcasting Corporation (85%) and Arte itself (15%).

ARTE offers programmes on all sorts of screens that are free and without advertising. The new media formats complement the on-air programming.