Artur Axmann (18 February 1913 – 24 October 1996) was the German Nazi national leader (Reichsjugendführer) of the Hitler Youth (Hitlerjugend) from 1940 to the war's end in 1945. He was the last living Nazi with a rank equivalent to Reichsführer.

Axmann was born in Hagen, Westphalia, the son of an insurance clerk.[1] In 1916, his family moved to Berlin-Wedding, where his father died two years later. Young Axmann was a good student and received a scholarship to attend secondary school. He joined the Hitler Youth in November 1928, after he heard Nazi Gauleiter Joseph Goebbels speaking, and became leader of the local cell in the Wedding district.[2] He also joined the National Socialist Schoolchildren's League, where he distinguished himself as an orator.

Having obtained his Abitur degree (i.e., graduated from high school), Axmann began studying law and economics at the Frederick William University in Berlin. Soon thereafter, however, his mother fell seriously ill, and he had to abandon his studies to provide for the family. 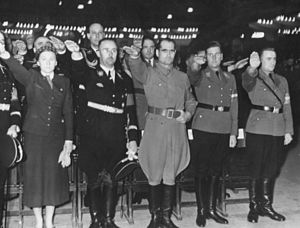 In September 1931, Axmann joined the Nazi Party and the next year he was called to the NSDAP Reichsjugendführung[1] to carry out a reorganisation of Hitler Youth factory and vocational school cells. After the Nazi seizure of power in 1933, he rose to a regional leader and became Chief of the Social Office of the Reich Youth Leadership.[2]

Axmann directed the Hitler Youth in state vocational training and succeeded in raising the status of Hitler Youth agricultural work. In November 1934, he was appointed Hitler Youth leader of Berlin and from 1936 presided at the annual Reichsberufswettkampf competitions. On 30 January 1939 he was awarded the Golden Party Badge.

Axmann was on active service on the Western Front until May 1940.[2] On 1 May 1940, he was appointed deputy to Nazi Reichsjugendführer Baldur von Schirach, whom he succeeded three months later on 8 August 1940. As a member of the Wehrmacht 23rd Infantry Division, he was severely wounded on the Eastern Front in 1941, losing his right arm.[2]

In 1943, Axmann promoted the formation of the 12th SS Panzer Division Hitlerjugend with servicemen drawn from the Hitler Youth. In the last weeks of the war in Europe, Axmann commanded units of the Hitler Youth (Hitlerjugend), which had been incorporated into the Home Guard (Volkssturm). His units consisted mostly of children and adolescents. They fought in the Battle of Seelow Heights (Seelower Höhen) and the Battle in Berlin.[2]

During Hitler's last days in Berlin, Axmann was among those present in the Führerbunker.[1] During that time it was announced in the German Press that Axmann had been awarded the German Order, the highest decoration that the Nazi Party could bestow on an individual for his services to the Reich.[3] He and one other recipient, Konstantin Hierl, were the only holders of the award to survive the war and its consequences. All other recipients were either awarded it posthumously, or were killed during the war or its aftermath.[3]

On 30 April 1945, just a few hours before committing suicide, Hitler signed the order to allow a breakout. According to a report made to his Soviet captors by Obergruppenfuehrer Hans Rattenhuber, the head of Hitler's bodyguard, Axmann took the Walther PP pistol which had been removed from the room in the Fuehrerbunker by Heinz Linge, Hitler's valet, which Hitler had used to commit suicide, saying that he would "hide it for better times".[4]

On 1 May, Axmann left Führerbunker as part of a breakout group that included Martin Bormann, Werner Naumann and SS doctor Ludwig Stumpfegger.[5] Attempting to break out of the Soviet encirclement, their group managed to cross the River Spree at the Weidendammer Bridge.[6]

Leaving the rest of their group, Bormann, Stumpfegger, and Axmann walked along railway tracks to Lehrter railway station. Bormann and Stumpfegger followed the railway tracks towards Stettiner station. Axmann decided to go in the opposite direction of his two companions.[7] When he encountered a Red Army patrol, Axmann doubled back. He saw two bodies, which he later identified as Bormann and Stumpfegger, on the Invalidenstraße bridge near the railway switching yard (Lehrter Bahnhof); the moonlight clearly illuminating their faces.[7][8] He did not have time to check the bodies thoroughly, so he did not know how they died.[9] He avoided capture by Soviet troops and disappeared.[10] His statements were confirmed by the discovery of Bormann's and Stumpfegger's mortal remains in 1972.[11]

Axmann lived under the alias of "Erich Siewert" for several months. In December 1945, Axmann was arrested in Lübeck when a Nazi underground movement which he had been organising was uncovered by a U.S. Army counterintelligence operation.[10]

In May 1949, a Nuremberg de-Nazification court sentenced Axmann to a prison sentence of three years and three months as a 'major offender'.[10] On 19 August 1958, a West Berlin court fined the former Hitler Youth leader 35,000 marks (approximately £3,000, or $8,300 USD), about half the value of his property in Berlin. The court found him guilty of indoctrinating German youth with National Socialism until the end of the Third Reich, but concluded he was not guilty of war crimes.[10] During his trial, Axmann told the court he heard the shot by which Hitler committed suicide. He also stated he had attempted to escape from central Berlin along with Martin Bormann, who he said had died during the attempt.

After his release from custody, Axmann worked as a businessman with varying success. From 1971 he left Germany for a number of years, living on the island of Gran Canaria.[10] Axmann returned to Berlin in 1976, where he died on 24 October 1996, aged 83. His cause of death and details of his surviving family members were not disclosed.[12]

Axmann was portrayed by Harry Brooks, Jr. in the 1973 British television production The Death of Adolf Hitler.[13]