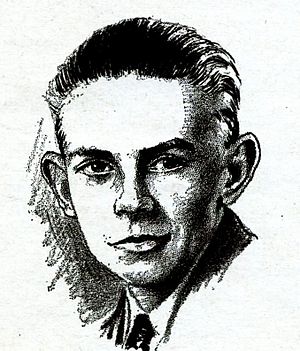 Arthur K. Barnes, as pictured in the February 1932 issue of Wonder Stories.

Arthur Kelvin Barnes (6 December 1909 – 11 March 1969) was an American science fiction author. Barnes wrote mostly for pulp magazines in the 1930s and 1940s. Barnes was most noted for his vivid and believable portrayals of alien life. As such, he is compared to Stanley G. Weinbaum. Before Barnes (and Weinbaum), SF writers usually portrayed aliens as earth-like monsters, with little originality.[1] He was a member of the Mañana Literary Society.[2]