From Infogalactic: the planetary knowledge core
Jump to: navigation, search
This article is about a field of research. For artificially created life forms, see Synthetic life. For the journal, see Artificial Life (journal).
"ALife" redirects here. It is not to be confused with Alife.

Artificial life (often abbreviated ALife or A-Life) is a field of study wherein researchers examine systems related to natural life, its processes, and its evolution, through the use of simulations with computer models, robotics, and biochemistry.[1] The discipline was named by Christopher Langton, an American computer scientist, in 1986.[2] There are three main kinds of alife,[3] named for their approaches: soft,[4] from software; hard,[5] from hardware; and wet, from biochemistry. Artificial life researchers study traditional biology by trying to recreate aspects of biological phenomena.[6] 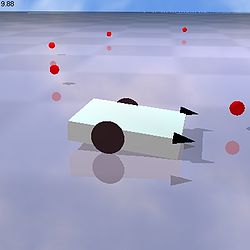 A Braitenberg simulation, programmed in breve, an artificial life simulator

Artificial life studies the fundamental processes of living systems in artificial environments in order to gain a deeper understanding of the complex information processing that define such systems. These topics are broad, but often include evolutionary dynamics, emergent properties of collective systems, biomimicry, as well as related issues about the philosophy of the nature of life and the use of lifelike properties in artistic works.

The modeling philosophy of artificial life strongly differs from traditional modeling by studying not only “life-as-we-know-it” but also “life-as-it-might-be”.[7]

A traditional model of a biological system will focus on capturing its most important parameters. In contrast, an alife modeling approach will generally seek to decipher the most simple and general principles underlying life and implement them in a simulation. The simulation then offers the possibility to analyse new and different lifelike systems.

At present, the commonly accepted definition of life does not consider any current alife simulations or software to be alive, and they do not constitute part of the evolutionary process of any ecosystem. However, different opinions about artificial life's potential have arisen:

This is a list of artificial life/digital organism simulators, organized by the method of creature definition.

Program-based simulations contain organisms with a complex DNA language, usually Turing complete. This language is more often in the form of a computer program than actual biological DNA. Assembly derivatives are the most common languages used. An organism "lives" when its code is executed, and there are usually various methods allowing self-replication. Mutations are generally implemented as random changes to the code. Use of cellular automata is common but not required. Another example could be an artificial intelligence and multi-agent system/program.

Individual modules are added to a creature. These modules modify the creature's behaviors and characteristics either directly, by hard coding into the simulation (leg type A increases speed and metabolism), or indirectly, through the emergent interactions between a creature's modules (leg type A moves up and down with a frequency of X, which interacts with other legs to create motion). Generally these are simulators which emphasize user creation and accessibility over mutation and evolution.

Organisms are generally constructed with pre-defined and fixed behaviors that are controlled by various parameters that mutate. That is, each organism contains a collection of numbers or other finite parameters. Each parameter controls one or several aspects of an organism in a well-defined way.

These simulations have creatures that learn and grow using neural nets or a close derivative. Emphasis is often, although not always, more on learning than on natural selection.

Hardware-based artificial life mainly consist of robots, that is, automatically guided machines able to do tasks on their own.

Biochemical-based life is studied in the field of synthetic biology. It involves e.g. the creation of synthetic DNA. The term "wet" is an extension of the term "wetware".

What are the potentials and limits of living systems?

How is life related to mind, machines, and culture?