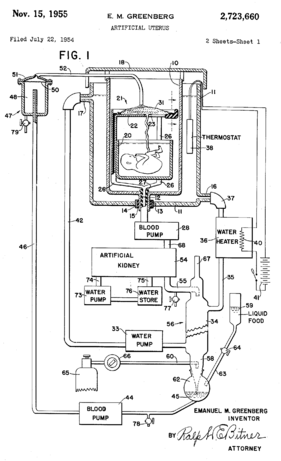 Illustration of an artificial womb patented by Emanuel M Greenberg in 1955.

An artificial uterus (or artificial womb) is a theoretical device that would allow for extracorporeal pregnancy or extrauterine fetal incubation (EUFI)[1] by growing an embryo or fetus outside of the body of a female organism that would normally internally carry the embryo or fetus to term.

An artificial uterus, as a replacement organ, would have many applications. It could be used to assist male or female couples in the development of a fetus.[1] This can potentially be performed as a switch from a natural uterus to an artificial uterus, thereby moving the threshold of fetal viability to a much earlier stage of pregnancy.[1] In this sense, it can be regarded as a neonatal incubator with very extended functions. Also, it can potentially be used for initiation of fetal development.[1] Furthermore, it could avail for performing, for example, fetal surgery procedures at an early stage instead of having to postpone them until term of pregnancy.[1]

A human may still supply nutrients and dispose of waste products if the artificial uterus is connected to her.[1] Also, it may provide immune protection against diseases by passing of IgG antibodies to the embryo or fetus.[1]

Artificial supply and disposal have the potential advantage of allowing the fetus to develop in an environment that is not influenced by the presence of disease, environmental pollutants, alcohol, or drugs which a human may have in the circulatory system.[1] Also, there is no risk of an immune reaction towards the embryo or fetus that could otherwise arise from insufficient gestational immune tolerance.[1] Following are aspects of individual functions of an artificial supplier and disposer:

Theoretically, animal suppliers and disposers may be used, but when involving an animal's uterus the technique may rather be in the scope of interspecific pregnancy.

Naturally, the myometrium of the uterine wall functions to expel the fetus at the end of a pregnancy, and the endometrium plays a role in forming the placenta.

An artificial uterus may include components of equivalent function. Also, methods have been considered to connect an artificial placenta and other "inner" components directly to an external circulation.[1]

An interface between the supplier and the embryo or fetus may be entirely artificial, e.g. by using one or more semipermeable membranes such as is used in extracorporeal membrane oxygenation (ECMO).[2]

There is also potential to grow a placenta using human endometrial cells. In 2002, it was announced that tissue samples from cultured endometrial cells removed from a human donor had successfully grown.[6][7] The tissue sample was then engineered to form the shape of a natural uterus, and human embryos were then implanted into the tissue. The embryos correctly implanted into the artificial uterus' lining and started to grow. However, the experiments were halted after six days to stay within the permitted legal limits of in vitro fertilisation (IVF) legislation in the United States.[1]

The main function of an amniotic tank would be to fill the function of the amniotic sac in physically protecting the embryo or fetus, optimally allowing it to move freely. It should also be able to maintain an optimal temperature. Lactated Ringer's solution can be used as a substitute for amniotic fluid.[2]

Theoretically, in case of premature removal of the fetus from the natural uterus, the natural umbilical cord could be used, kept open either by medical inhibition of physiological occlusion, by anti-coagulation as well as by stenting or creating a bypass for sustaining blood flow between the mother and fetus.[1]

The development of artificial uteri and ectogenesis raises a number of bioethical and legal considerations.

The artificial uterus has important implications for reproductive rights and the abortion debate. Artificial uteri may expand the range of fetal viability, raising questions about the role that fetal viability plays within abortion law. Within severance theory, for example, abortion rights only include the right to remove the fetus and do not extend to terminate the life of the fetus. If transferring the fetus from a woman's womb to an artificial uterus is possible, the choice to terminate a pregnancy may not necessitate the termination of the fetus.[8][9]

There are also concerns that children who develop in an artificial uterus may lack "some essential bond with their mothers that other children have."[10]

In the 1970 book The Dialectic of Sex, feminist Shulamith Firestone wrote that differences in biological reproductive roles are a source of gender inequality. Firestone singled out pregnancy and childbirth, making the argument that an artificial womb would free "women from the tyranny of their reproductive biology."[11][12]

The use of the artificial uterus has played a significant role in science fiction:

In the Mahabharata, Queen Gandhari of Gandhara (existing on the border between Afghanistan and Pakistan), the wife of King Dhrita-rashtra was unable to deliver a baby though several months elapsed. Meanwhile, her brother-in-law's wife Kunthi delivered 5 babies who were to become Pandavas afterwards. Then Gandhari got jealous of Kunthi and hysterically hit against her own belly resulting in a miscarriage. The embryo disintegrated into 100 pieces. They were then placed in "jars of ghee" (clarified butter) by Saint Veda Vyasa, her father-in-law and grown to term as 100 Kaurava princes.