Artur Nikolayevich Chilingarov (Russian: Артур Николаевич Чилингаров; born 25 September 1939) is an Armenian-Russian polar explorer. He is a corresponding member of the Russian Academy of Sciences, he was awarded the title of Hero of the Soviet Union in 1986 and the title of Hero of the Russian Federation in 2008. He is the president of State Polar Academy. Chilingarov is a member of the United Russia party; he was a member of the State Duma from 1993 to 2011[1] and is the current representative of Tula Oblast in the Federation Council.

He was born in Leningrad to Russian mother and Armenian father. His father was born in Gyumri (Leninakan) and moved to Vladikavkaz at a young age.[2]

In 1963, he graduated from the Arctic faculty of the S.O. Makarov Leningrad Maritime Institute. As an engineer-oceanographer, he was directed to the Tiksi observatory of the Arctic and Antarctic Research Institute. In 1965, he was elected first secretary of the Bulun Komsomol district committee. In 1969, he was appointed head of the drift ice station “North Pole-19” and, in 1971, Chilingarov headed the Bellingshausen Station of the 17th Soviet Antarctic Expedition.

Between 1974 and 1979, he worked in the Western sector of the Arctic as head of the Amderma Administration of hydrometeorology and environmental control. Under his direction, new forms of Arctic operative navigation support were implemented; for the first time, experimental work on cargo transfers to fast ice during wintertime were carried out in the Yamal Peninsula. Chilingarov summarized his experience in navigation support on the Northern Sea Route in his dissertation for the scientific degree of a kandidat of geographical sciences.

In 1985, he headed the special expedition on the research vessel Mikhail Somov, which was ice-blocked in the Southern Ocean. For successful performance of the rescue operations in extreme conditions and for displayed organizational abilities and courage, Chilingarov was awarded the title of Hero of the Soviet Union on February 14, 1986.[3]

In January 2002, he led an expedition to the South Pole along with 14 other tourists on an Antonov An-3 biplane. When a mechanical problem grounded the aircraft at the South Pole, Chilingarov and other VIPs were flown by American Hercules LC130 aircraft to McMurdo and then onward to Christchurch. The rest of the group arranged a pick-up from Adventure Network International, who operate tourist flights to the South Pole.[4] In January 2007, he led a helicopter expedition to Antarctica, he was joined by FSB chief Nikolay Patrushev and visited the South Pole and Amundsen-Scott station.[5]

During the 2007 Russian North Pole expedition, Chilingarov, accompanied by five other explorers from different countries, descended on 2 Mir submersibles to the seabed 13,980 feet below the North Pole in order to plant the Russian flag there and gather specimens of the seabed.[6] In regard to the territorial claims in the Arctic, Chilingarov was quoted as saying, "The Arctic is Russian. We must prove the North Pole is an extension of the Russian landmass".[7]

In July 2008, Russia announced it was sending Mir submersibles to descend one mile to the bottom of Lake Baikal to conduct geological and biological tests on its unique ecosystem. Chilingarov is scheduled to join in 60 dives in total.[8] On July 29, 2008, Chilingarov took part in a dive to a depth of 1,580 meters in Lake Baikal, just short of the record 1,637 meters.[9]

On January 10, 2008, Chilingarov was awarded the title of Hero of the Russian Federation for "courage and heroism displayed in extreme conditions and for the successful completion of the High-Latitude Arctic Deep-Water Expedition."[10]

In August 2009, he revealed a planned Arctic expedition for April 2010. Chilingarov plans to fly on dirigible AU-30, manufactured by the Aeronautic Centre Avgur.[11]

In December 2012, Artur Chilingarov supported Anti-Magnitsky bill to ban U.S. adoptions of Russian orphans, although he said earlier that there was no need to rush the legislation: "It concerns children, and you have to be accurate with it” [12] 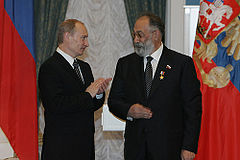 Chilingarov is the author of more than 50 scientific publications. He was elected into all the State Dumas and served as Deputy Chairman of the Third State Duma.