From Infogalactic: the planetary knowledge core
Jump to: navigation, search
For other uses, see Asana (disambiguation). 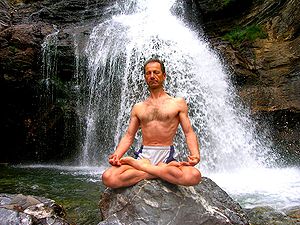 In yoga, asana refers both to the place in which a practitioner (yogi if male, yogini if female) sits and the posture in which he or she sits.[1] In the Yoga Sutras, Patanjali defines "asana" as "to be seated in a position that is firm, but relaxed".[2] Patanjali mentions the ability to sit for extended periods as one of the eight limbs of his system, known as ashtanga yoga.[3]

Asanas are also performed as physical exercise where they are sometimes referred to as "yoga postures" or "yoga positions".[4] Some asanas are arguably performed by many practitioners just for health purposes. Asanas do promote good health, although in different ways compared to physical exercises, "placing the physical body in positions that cultivate also awareness, relaxation and concentration".[5]

listen (help·info) Sanskrit: आसन āsana [ˈɑːsənə] 'sitting down', < आस ās 'to sit down'[6]) originally meant a sitting position. The word asana in Sanskrit does appear in many contexts denoting a static physical position, although traditional usage is specific to the practice of yoga. Traditional usage defines asana as both singular and plural. In English, plural for asana is defined as asanas. In addition, English usage within the context of yoga practice sometimes specifies yogasana or yoga asana, particularly with regard to the system of the Ashtanga Vinyasa Yoga. However, yogasana is also the name of a particular posture that is not specifically associated with the Vinyasa system, and that while "ashtanga" (small 'a') refers to the eight limbs of Yoga delineated below, Ashtanga (capital 'A') refers to the specific system of Yoga developed by Sri Krishnamacharya at the Mysore Palace.

Yoga first originated in India. In the Yoga Sutras, Patanjali describes asana as the third of the eight limbs of classical, or Raja Yoga. Asanas are the physical movements of yoga practice and, in combination with pranayama or breathing techniques, constitute the style of yoga referred to as Hatha Yoga.[7] In the Yoga Sutra, Patanjali describes asana as a "steady and comfortable posture", referring specifically to the seated, meditative postures used for meditation practices. He further suggests that meditation is the path to samādhi; transpersonal self-realization.[8]

The eight limbs are, in order, the yamas (codes of social conduct), niyamas (self-observances), asanas (postures), pranayama (breath work), pratyahara (sense withdrawal or non-attachment), dharana (concentration), dhyana (meditation), and samadhi (realization of the true Self or Atman, and unity with Brahman (The Hindu Concept of Ultimate Reality)).[3][8] 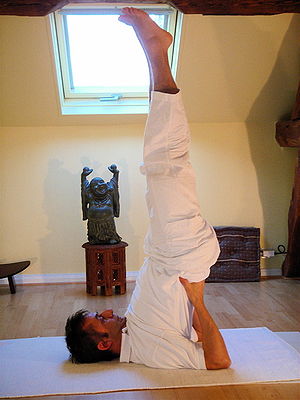 In the Yoga Sutras, Patanjali suggests that the only rule for practicing asanas is that it be "steady and comfortable".[3] The body is held poised with the practitioner experiencing no discomfort. When control of the body is mastered, practitioners are believed to free themselves from the duality of heat/cold, hunger/satiety, joy/grief, which is the first step toward the unattachment that relieves suffering.[9]

Listed below are traditional rules for performing asanas:[10][11]

Pranayama, or breath control, is the Fourth Limb of ashtanga, as set out by Patanjali in the Yoga Sutra. The practice is an integral part of both Hatha Yoga and Ashtanga Vinyasa Yoga but while performing asanas. They are to be practiced and perfected as individual practices of their own.

Patanjali discusses his specific approach to pranayama in verses 2.49 through 2.51, and devotes verses 2.52 and 2.53 of the Sutra to explaining the benefits of the practice.[12] Patanjali describes pranayama as the control of the enhanced "life force" that is a result of practicing the various breathing techniques, rather than the exercises themselves.[13][14] The entirety of breathing practices includes those classified as pranayama, as well as others called svarodaya, or the "science of breath". It is a vast practice that goes far beyond the limits of pranayama as applied to asana.[15]

Surya Namaskara, or the Salutation of the Sun, which is very commonly practiced in most forms of yoga, originally evolved as a type of worship of Surya, the Vedic solar deity, by concentrating on the Sun for vitalization. The practice supports development of the koshas, or temporal sheaths, of the subtle body.[16]

The physical aspect of the practice 'links together' twelve asanas in a dynamically expressed series. A full round of Surya namaskara is considered to be two sets of the twelve asanas, with a change in the second set where the opposing leg is moved first. The asanas included in the sun salutation differ from tradition to tradition.[17]

The physical aspect of what is called yoga in recent years, the asanas, has been much popularized in the West due to the vast amount of benefits.[18][19][20][21][22][23][24] Physically, the practice of asanas is considered to:

The emphasis on the physical benefits of yoga, attributed to practice of the asanas, has de-emphasized the other traditional purposes of yoga which are to facilitate the flow of prana (vital energy) and to aid in balancing the koshas (sheaths) of the physical and metaphysical body.

In 1959, Swami Vishnu-devananda published a compilation of 66 basic postures and 136 variations of those postures.[34] In 1975, Sri Dharma Mittra suggested that "there are an infinite number of asanas.",[35] when he first began to catalogue the number of asanas in the Master Yoga Chart of 908 Postures, as an offering of devotion to his guru Swami Kailashananda Maharaj. He eventually compiled a list of 1300 variations, derived from contemporary gurus, yogis, and ancient and contemporary texts.[35] This work is considered one of the primary references for asanas in the field of yoga today.[36] His work is often mentioned in contemporary references for Iyengar Yoga, Ashtanga Vinyasa Yoga, Sivananda Yoga, and other classical and contemporary texts.[37]

A group of 84 classic asanas taught by Lord Shiva is mentioned in several classic texts on yoga. Some of these asanas are considered highly important in the yogic canon: texts that do mention the 84 frequently single out the first four as necessary or vital to attain yogic perfection. However, a complete list of Shiva's asanas remains as yet unverified, with only one text attempting a complete corpus.

Patanjali's Yoga Sutra (4-2nd century BC) does not mention a single asana by name, merely specifying the characteristics of a good asana.[38] Later yoga texts however, do mention the 84 Classic Asanas and associate them with Shiva.

The Goraksha Samhita (10-11th century CE), or Goraksha Paddhathi, an early hatha yogic text, describes the origin of the 84 classic asanas. Observing that there are as many postures as there are beings and asserting that there are 8,400,000[39] species in all, the text states that Lord Shiva fashioned an asana for each 100,000, thus giving 84 in all, although it mentions and describes only two in detail: the siddhasana and the padmasana.[40]

The Hatha Yoga Pradipika (15th century CE) specifies that of these 84, the first four are important, namely the siddhasana, padmasana, bhadrasana and simhasana.[41]

The Hatha Ratnavali (17th century CE)[42] is one of the few texts to attempt a listing of all the 84, although 4 out of its list do not have meaningful translations from the Sanskrit, and 21 are merely mentioned without any description.[43][verification needed] In all, 52 asanas of the Hatha Ratnavali are confirmed and described by the text itself, or other asana corpora.[44]

In 2007, public awareness of increasing attempts to patent traditional asanas in the US like for example the attempt made by Kolkata born body builder Bikram Ghosh, and others, amounting to 130 yoga-related patents in the US documented that year,[47] prompted the government of India to seek clarification on the guidelines for patenting asanas from the US Patent Office.[48][49] In 2008, to clearly show that all asanas are public knowledge and therefore not patentable, the government of India formed a team of yoga gurus, government officials, and 200 scientists from the Council of Scientific and Industrial Research (CSIR) to register all known asanas in a public database. The team collected asanas from 35 ancient texts including the Hindu epics, the Mahabharata, the Bhagwad Gita, and Patanjali's Yoga Sutras and as of 2010, has identified 900 asanas for the database which was named the Traditional Knowledge Digital Library and made available to patent examiners.[50][51]