Ashtavakra (Sanskrit: अष्टावक्रः, IAST Aṣṭāvakra) is a sage mentioned in Hindu scriptures. He is described as one born with eight different deformities of the body (two feet, two knees, two hands, the chest and the head). In Sanskrit, Aṣṭāvakra means "one having eight bends". Ashta (IAST Aṣṭa) means eight, while Vakra means bend or deformity. Aṣṭāvakra is the author of the work Aṣṭāvakra Gītā, also known as Aṣṭāvakra Saṃhitā, a treatise on the instruction by Aṣṭāvakra to Janaka about the Self. Aṣṭāvakra is the Guru of the king Janaka and the sage Yājñavalkya.

Aṣṭāvakra is first referenced in a single verse (6.119.17) of Yuddha Kāṇḍa in Vālmikī's Rāmāyaṇa. When Daśaratha comes to see Rāma from heaven after the war of the Rāmāyaṇa, he tells Rāma –[1]

In the Aranya Kanda of Adhyatma Ramayana, the demon Kabandha narrates his story to Rama and Lakshmana, in which he says that he was a Gandharva earlier who was cursed by Ashtavakra to become a demon when he laughed on seeing him (Ashtavakra).[2] When the Gandharva then bowed down to Ashtavakra, Ashtavakra said that he would be released from the curse by Rama in Treta Yuga.[2]

In the Vana Parva of the Mahābhārata, the legend of Aṣṭāvakra is described in greater detail. On losing the game of dice with the Kauravas, the five Pāṇḍava princes and Draupadi are exiled for twelve years. On their pilgrimage, they meet the sage Lomaśa, who shows the river Samanga to Yudhiṣṭhira. Lomaśa says that this is the same river, on bathing in which the deformed Aṣṭāvakra was cured of his eight deformities. On being asked by Yudhishthira, Lomaśa narrates to the Pāṇḍava princes the legend of Aṣṭāvakra, over three chapters of Vana Parva of the Mahābhārata.[3][4] Aṣṭāvakra's wisdom on various aspects of human existence is recited in the Mahābhārata. For example:

A grey head does not make an elder,
Not by years, not by grey hairs, not by riches nor by relations did the seers make the Law,
He who is great to us, is one who has learning. 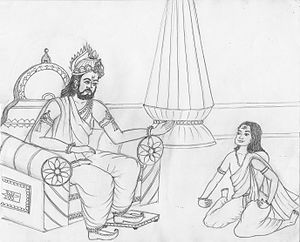 Janaka debating with Ashtavakra. Art from the epic Ashtavakra (2010).

The sage Uddalaka, the seer mentioned in the Chāndogya Upaniṣad, ran a school (Āśrama) teaching the Vedas. Kahola (also spelled Kahoḍa) was one of his best disciples. Uddalaka was so pleased with him that he had his daughter Sujata married to him. When Sujātā got pregnant, she had the desire of wanting her child to imbibe spirituality and intelligence. She began to sit in the classes taught by Uddalaka and Kahola, listening to their chanting of the Vedic Mantras. In India, there is a belief that when expectant mothers expose themselves to spiritual teachings, the child in the womb hears it and gathers that knowledge and become a genius in that spiritual area after its birth.[5]

One day, as Kahola was reciting the Vedas within the hearing distance of the child growing in the womb. The embryo was aware of the correct pronunciation of every syllable since its mother used to attend classes with rapt attention. The embryo heard the recitation of Kahola, but whenever Kahola pronounced a syllable wrong, it squirmed in distress. The embryo informed Kahola that he had pronounced the syllable wrongly as indicated by the child in the womb. This happened on eight occasions. Kahola perceived this as arrogance on the part of something, yet to manifest itself in the world. He cursed the fetus with eight deformities of the body. When the baby was born, it was crooked in eight places – the two feet, the two knees, the two hands, the chest and the head). He was named Aṣṭāvakra, which means "one having eight bends".

Around the time Aṣṭāvakra was born, Kahola was persuaded by Sujātā to go to the court of Janaka to earn some money. In Janaka's court, Kahola was challenged to a scriptural debate (Śastrārtha) by the philosopher, Vandin (also spelled Bandin). In that time, the best philosophers were invited to argue in the presence of the monarch Janaka. Vandin easily defeated Kahola and immersed the vanquished Kahola in under water. Aṣṭāvakra was now raised by Uddalaka. Uddalaka too had a son named Śvetaketu when Aṣṭāvakra was born. Aṣṭāvakra and Shvetaketu grew up together. Uddalaka, Sujata and the disciples ensured that Aṣṭāvakra was never informed of his real father, Aṣṭāvakra thought that Uddalaka was his father and Shvetaketu|Śvetaketu his brother. When he was twelve years old, Aṣṭāvakra was seated on Uddalaka's lap. Śvetaketu pulled him down and informed him that it was not the lap of his father. Aṣṭāvakra came to know the truth about his father Kahola from Sujāatā, He decided to confront Vandin and defeat him in an argument.

Aṣṭāvakra and Śvetaketu made his way to Janaka's palace. Aṣṭāvakra first faced the gatekeeper who tried to keep the young boy out. On convincing the gatekeeper that he was well versed in the scriptures and hence old, he was let in. Then Janaka tested Aṣṭāvakra with cryptic questions which Aṣṭāvakra answered with ease. Janaka decided to let Aṣṭāvakra face Vandin. Vandin and Aṣṭāvakra began the debate, with Vandin starting. They alternately composed six extempore verses on the numbers one to twelve. Then Vandin could only compose the first half of a verse on the number thirteen. Aṣṭāvakra completed the verse by composing the second half and thus won the argument against Vandin. This unique debate is full of enigmas and latent meanings which lie under the simple counts of the numbers one to thirteen.[6]

The condition of the contest was that if Vandin were to lose he would grant any wish of his vanquisher. Aṣṭāvakra demanded that Vandin be drowned in water just as he forced his vanquished opponents to do. Vandin then revealed that he was the son of Varuṇa (the Lord of all water bodies), and was sent incognito to land to get Ṛṣis to conduct a ritual that Varuṇa wanted to perform. By this time, Varuṇa's ritual was also complete. On Vandin's request, Varuṇa bade the sages and Brahmaṇas farewell and brought them to surface. Aṣṭāvakra worshipped his father and was in turn praised by all the freed sages. Kahola was extremely pleased with his son. Kahola returned to his aśrama with Aṣṭāvakra and Śvetaketu. In the presence of Sujātā, Kahola asked Aṣṭāvakra to bathe in the river Samanga. When Aṣṭāvakra entered the river, all his crooked limbs became straight. Ashtawakara gave god knowledge(Gyan) to Raja Janak.

Later Aṣṭāvakra grew into a spiritually advanced rishi and self-realised atman. He went again to Mithila and instructed King Janaka about the Self. These teachings form the content of the Aṣṭāvakra Gītā or Aṣṭāvakra Saṃhitā as it is sometimes called.