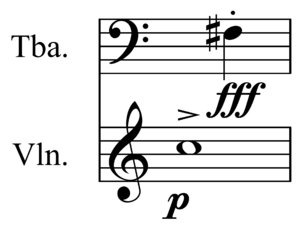 An aspect of music (rudiment) is any characteristic, dimension, or element taken as a part or component of music. A parameter is any element that can be manipulated (composed) separately from other elements.

The first person to apply the term parameter to music may have been Joseph Schillinger, though its relative popularity may be due to Werner Meyer-Eppler (Grant 2005, 62n85). Gradation is gradual change within one parameter, or an overlapping of two blocks of sound. There is disagreement over the number and existence of specific aspects, as well as whether any aspects are common to all music.

Silence is also often considered an aspect of music, if it is considered to exist. These aspects combine to create secondary aspects including form or structure, and style.

The above list relates only to single source, monophonic sounds. When the total sonic environment is considered, the following aspects (elements) are included: spatial location and texture.

Some definitions refer to music as a score, or a composition (Dictionary.com 2015) (Merriam-webster.com 2015) (Oxforddictionaries.com): music can be read as well as heard, and a piece of music never played is a piece of music notwithstanding. The process of reading music, at least for trained musicians, involves a process called “inner hearing” or "audiation" (Gordon 1999). This is where the music is heard in the mind as if it were being played. Although the product of this process is not called "sound" there seems to be no alternative name.

Definitions of music often list aspects or elements that make up music, but these lists vary widely. In addition to a lack of consensus, Jean Molino (1975, 43) also points out that "any element belonging to the total musical fact can be isolated, or taken as a strategic variable of musical production." Nattiez gives as examples Mauricio Kagel's Con Voce [with voice], where a masked trio silently mimes playing instruments. In this example sound, a common element, is excluded, while gesture, a less common element, is given primacy. However Nattiez goes on to say that despite special cases where sound is not immediately obvious (because it is heard in the mind): “sound is a minimal condition of the musical fact” (Nattiez 1990, 43). In classical music of the common practice period, melody and harmony are often given more importance at the expense of rhythm and timbre. John Cage considers duration the primary aspect of music as, being the temporal aspect of music, it is the only aspect common to both sound and silence.

Some debate whether some aspects of music are universal. This debate often hinges on definitions. For instance, the fairly common assertion that "tonality" is a universal of all music may necessarily require an expansive definition of tonality. A pulse is sometimes taken as a universal, yet there exist solo vocal and instrumental genres with free and improvisational rhythms no regular pulse (Johnson 2002,[page needed]), one example being the alap section of an Indian classical music performance. "We must ask whether a cross-cultural musical universal is to be found in the music itself (either its structure or function) or the way in which music is made. By 'music-making,' I intend not only real performance but also how music is heard, understood, even learned."(Dane Harwood 1976, 522)

One aspect that is important to bear in mind when examining multi-cultural associations, is that we are discussing an English language word, not a universal concept. For this reason it is important to approach apparently equivalent words in other languages with caution. Based on the many disparate definitions that can be found just in English language dictionaries (Google.com.au 2015; Dictionary.com 2015; Merriam-webster.com 2015; Music 1991, 1994, 1998, 2000, 2003), it seems we cannot agree what the word "Music" means in our own language, let alone determining a potentially equivalent word from another culture.

According to Merriam (1964, 32-33) there are three aspects always present in musical activity: concept, behaviour, and sound. Virgil Thomson (1957, vii) lists the "raw materials" of music in order of their discovery: rhythm, melody, and harmony; with the construction of these materials using two major techniques: counterpoint (the simultaneity and organization of different melodies) and orchestration. Rhythm does not require melody or harmony, but it does require melody if the instrument produces a continuous sound, harmony arises from reverberation causing the overlap of different pitches, and counterpoint arises from multiple melodies.

Kenneth Gourlay recounts that, "Writing of her own Igbo music, the Nigerian musicologist Chinyere Nwachukwu maintains that the 'concept of music nkwa combines singing, playing musical instruments, and dancing into one act' (Gorlay 1981, 59). Whatever concept of 'music' is held by members of western society, it is highly improbable that, apart from forward-looking scholars and composers, it will contain all three elements. Nkwa in fact is not 'music' but a wider affective channel that is closer to the karimojong mode of expression than to western practice. The point of interest here is that Nwachukwu feels constrained to use the erroneous term 'music': not because she is producing a 'musical dissertation,' but because the 'one act' the Igbos perform has no equivalent in the English language. By forcing the Igbo concept into the Procrustean bed of western conceptualization, she is in effect surrendering to the dominance of western ideas—or at least to the dominance of the English language! How different things would have been if the Igbo tongue had attained the same 'universality' as English!" (Gourlay 1984, 35). He then concludes that there exists "nonuniversality of music and the universality of nonmusic."