Association rule learning is a method for discovering interesting relations between variables in large databases. It is intended to identify strong rules discovered in databases using some measures of interestingness.[1] Based on the concept of strong rules, Rakesh Agrawal et al.[2] introduced association rules for discovering regularities between products in large-scale transaction data recorded by point-of-sale (POS) systems in supermarkets. For example, the rule

found in the sales data of a supermarket would indicate that if a customer buys onions and potatoes together, they are likely to also buy hamburger meat. Such information can be used as the basis for decisions about marketing activities such as, e.g., promotional pricing or product placements. In addition to the above example from market basket analysis association rules are employed today in many application areas including Web usage mining, intrusion detection, Continuous production, and bioinformatics. In contrast with sequence mining, association rule learning typically does not consider the order of items either within a transaction or across transactions.

Following the original definition by Agrawal et al.[2] the problem of association rule mining is defined as:

be a set of

be a set of transactions called the database.

A rule is defined as an implication of the form:

Every rule is composed by two different set of items, also known as itemsets,

is called antecedent or left-hand-side (LHS) and

To illustrate the concepts, we use a small example from the supermarket domain. The set of items is

and in the table is shown a small database containing the items, where, in each entry, the value 1 means the presence of the item in the corresponding transaction, and the value 0 represent the absence of an item in a that transaction.

An example rule for the supermarket could be

meaning that if butter and bread are bought, customers also buy milk.

Note: this example is extremely small. In practical applications, a rule needs a support of several hundred transactions before it can be considered statistically significant[citation needed], and data-sets often contain thousands or millions of transactions.

In order to select interesting rules from the set of all possible rules, constraints on various measures of significance and interest are used. The best-known constraints are minimum thresholds on support and confidence.

an association rule and

a set of transactions of a given database.

The support value of

In the example database, the item-set

has a support of

is a set of preconditions, and thus becomes more restrictive as it grows (instead of more inclusive).

The confidence value of a rule,

, with respect to a set of transactions

, is the proportion of the transactions that contains

Confidence is defined as:

has a confidence of

means the support of the union of the items in X and Y. This is somewhat confusing since we normally think in terms of probabilities of events and not sets of items. We can rewrite

as the joint probability

are the events that a transaction contains itemset

, the probability of finding the RHS of the rule in transactions under the condition that these transactions also contain the LHS.[4]

The lift of a rule is defined as:

or the ratio of the observed support to that expected if X and Y were independent.

has a lift of

The conviction of a rule is defined as

has a conviction of

would be incorrect 20% more often (1.2 times as often) if the association between X and Y was purely random chance. 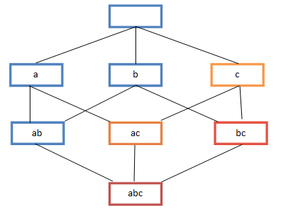 Frequent itemset lattice, where the color of the box indicates how many transactions contain the combination of items. Note that lower levels of the lattice can contain at most the minimum number of their parents' items; e.g. {ac} can have only at most

items. This is called the downward-closure property.[2]

While the second step is straightforward, the first step needs more attention.

(excluding the empty set which is not a valid item-set). Although the size of the power-set grows exponentially in the number of items

The concept of association rules was popularised particularly due to the 1993 article of Agrawal et al.,[2] which has acquired more than 18,000 citations according to Google Scholar, as of August 2015, and is thus one of the most cited papers in the Data Mining field. However, it is possible that what is now called "association rules" is similar to what appears in the 1966 paper[9] on GUHA, a general data mining method developed by Petr Hájek et al.[10]

In addition to confidence, other measures of interestingness for rules have been proposed. Some popular measures are:

A definition of these measures can be found here. Several more measures are presented and compared by Tan et al.[16] Looking for techniques that can model what the user has known (and using these models as interestingness measures) is currently an active research trend under the name of "Subjective Interestingness."

One limitation of the standard approach to discovering associations is that by searching massive numbers of possible associations to look for collections of items that appear to be associated, there is a large risk of finding many spurious associations. These are collections of items that co-occur with unexpected frequency in the data, but only do so by chance. For example, suppose we are considering a collection of 10,000 items and looking for rules containing two items in the left-hand-side and 1 item in the right-hand-side. There are approximately 1,000,000,000,000 such rules. If we apply a statistical test for independence with a significance level of 0.05 it means there is only a 5% chance of accepting a rule if there is no association. If we assume there are no associations, we should nonetheless expect to find 50,000,000,000 rules. Statistically sound association discovery[17][18] controls this risk, in most cases reducing the risk of finding any spurious associations to a user-specified significance level.

Many algorithms for generating association rules were presented over time.

Apriori[7] is the best-known algorithm to mine association rules. It uses a breadth-first search strategy to count the support of itemsets and uses a candidate generation function which exploits the downward closure property of support.

Eclat[8] (alt. ECLAT, stands for Equivalence Class Transformation) is a depth-first search algorithm using set intersection. It is a naturally elegant algorithm suitable for both sequential as well as parallel execution with locality enhancing properties. It was first introduced by Zaki, Parthasarathy, Li and Ogihara in a series of papers written in 1997.

In the first pass, the algorithm counts occurrence of items (attribute-value pairs) in the dataset, and stores them to 'header table'. In the second pass, it builds the FP-tree structure by inserting instances. Items in each instance have to be sorted by descending order of their frequency in the dataset, so that the tree can be processed quickly. Items in each instance that do not meet minimum coverage threshold are discarded. If many instances share most frequent items, FP-tree provides high compression close to tree root.

Recursive processing of this compressed version of main dataset grows large item sets directly, instead of generating candidate items and testing them against the entire database. Growth starts from the bottom of the header table (having longest branches), by finding all instances matching given condition. New tree is created, with counts projected from the original tree corresponding to the set of instances that are conditional on the attribute, with each node getting sum of its children counts. Recursive growth ends when no individual items conditional on the attribute meet minimum support threshold, and processing continues on the remaining header items of the original FP-tree.

Once the recursive process has completed, all large item sets with minimum coverage have been found, and association rule creation begins.[20]

AprioriDP[21] utilizes Dynamic Programming in Frequent itemset mining. The working principle is to eliminate the candidate generation like FP-tree, but it stores support count in specialized data structure instead of tree.

FIN,[22] PrePost [23] and PPV [24] are three algorithms based on node sets. They use nodes in a coding FP-tree to represent itemsets, and employ a depth-first search strategy to discovery frequent itemsets using "intersection" of node sets.

GUHA is a general method for exploratory data analysis that has theoretical foundations in observational calculi.[25]

The ASSOC procedure[26] is a GUHA method which mines for generalized association rules using fast bitstrings operations. The association rules mined by this method are more general than those output by apriori, for example "items" can be connected both with conjunction and disjunctions and the relation between antecedent and consequent of the rule is not restricted to setting minimum support and confidence as in apriori: an arbitrary combination of supported interest measures can be used.

OPUS is an efficient algorithm for rule discovery that, in contrast to most alternatives, does not require either monotone or anti-monotone constraints such as minimum support.[27] Initially used to find rules for a fixed consequent[27][28] it has subsequently been extended to find rules with any item as a consequent.[29] OPUS search is the core technology in the popular Magnum Opus association discovery system.

A famous story about association rule mining is the "beer and diaper" story. A purported survey of behavior of supermarket shoppers discovered that customers (presumably young men) who buy diapers tend also to buy beer. This anecdote became popular as an example of how unexpected association rules might be found from everyday data. There are varying opinions as to how much of the story is true.[30] Daniel Powers says:[30]

In 1992, Thomas Blischok, manager of a retail consulting group at Teradata, and his staff prepared an analysis of 1.2 million market baskets from about 25 Osco Drug stores. Database queries were developed to identify affinities. The analysis "did discover that between 5:00 and 7:00 p.m. that consumers bought beer and diapers". Osco managers did NOT exploit the beer and diapers relationship by moving the products closer together on the shelves.

Other types of association mining

Multi-Relation Association Rules: Multi-Relation Association Rules (MRAR) is a new class of association rules which in contrast to primitive, simple and even multi-relational association rules (that are usually extracted from multi-relational databases), each rule item consists of one entity but several relations. These relations indicate indirect relationship between the entities. Consider the following MRAR where the first item consists of three relations live in, nearby and humid: “Those who live in a place which is near by a city with humid climate type and also are younger than 20 -> their health condition is good”. Such association rules are extractable from RDBMS data or semantic web data.[31]

Weighted class learning is another form of associative learning in which weight may be assigned to classes to give focus to a particular issue of concern for the consumer of the data mining results.

High-order pattern discovery facilitate the capture of high-order (polythetic) patterns or event associations that are intrinsic to complex real-world data. [35]

K-optimal pattern discovery provides an alternative to the standard approach to association rule learning that requires that each pattern appear frequently in the data.

Sequential pattern mining discovers subsequences that are common to more than minsup sequences in a sequence database, where minsup is set by the user. A sequence is an ordered list of transactions.[38]

Sequential Rules discovering relationships between items while considering the time ordering. It is generally applied on a sequence database. For example, a sequential rule found in database of sequences of customer transactions can be that customers who bought a computer and CD-Roms, later bought a webcam, with a given confidence and support.