Aston University is a public research campus university situated at Gosta Green, in the city centre of Birmingham, England. Aston began as the Birmingham Municipal Technical School in 1895, evolving into the UK’s first elite College of Advanced Technology in 1956.[4] Aston University received its Royal Charter from Queen Elizabeth II on 22 April 1966.[5]

Aston was ranked by QS as the 42nd best university in the world under 50 years old in 2015.[6] It was ranked 5th in the UK for the percentage of graduates entering employment who achieve graduate level jobs in the 2012 Sunday Times University Guide.[7] A survey suggested it is one of the 20 most targeted universities by the UK's top employers.[8] Aston pioneered the integrated placement year concept over 50 years ago,[9][10][11] with more than 70% of Aston students take placement year, the highest percentage in the UK.[12] Aston students are the joint 15th most satisfied students out of 136 UK Universities, with the overall satisfaction level at 90%.[13] Aston University was responsible for educating 2.3 per cent of the UK's millionaires, placing Aston among the top 10 UK universities for producing millionaires.[14]

The origins of Aston University are a School of Metallurgy formed in the Birmingham and Midland Institute in 1875. The Birmingham Municipal Technical School separated from the Institute in 1895, teaching chemistry, physics, metallurgy and electrical engineering. In 1911, commercial classes were introduced and grew into an independent School of Commerce by 1916.[15] The school changed its name in 1927 to the Birmingham Central Technical College,[15] to reflect its changing approach to teaching technology.

In 1951, the Technical College was renamed the College of Technology, Birmingham[15] and work began on the Main Building at Gosta Green. In 1956, it became the first elite designated College of Advanced Technology and underwent a major expansion.[15] It moved into buildings that were constructed between 1949 and 1955 to a design by Ashley & Newman. Princess Margaret laid one of the first foundation stones at the base of the new building in 1951. The building is one of Europe’s largest, freestanding brick buildings.[18] In 1955, the College of Advanced Technology was opened by Her Majesty The Queen.[19] The college expanded again to a design by the City Architect of Birmingham Alwyn Sheppard Fidler between 1957 and 1965.[20]

It officially became the University of Aston in Birmingham on receipt of its Royal Charter on 22 April 1966 and the first Chancellor of the University, Lord Nelson of Stafford, was installed on 10 May. The Charter of the University outlines objectives appropriate to a technological university: "to advance, disseminate and apply learning and knowledge by teaching and research, for the benefit of industry and commerce and of the community generally: and to enable students to obtain the advantage of a university education, and such teaching and research may include periods outside the University in industry or commerce or wherever the University considers proper for the best advancement of its objects." The emphasis given to the sandwich course system, and the maintenance of strong links with industry, arises naturally from the institution’s history. The motto of the University is the same as that of the City of Birmingham – Forward.[21] The main building with water sculpture Tipping Triangles by Angela Conner. The building is one of Europe’s largest, freestanding brick buildings.[18]

Establishment of the Aston Science Park and Aston University’s contribution to the city of Birmingham was fully recognised when the area was granted its own postal address “The Aston Triangle” in 1984, emphasising the campus as an official district of Birmingham. The logo of the establishment takes from the shape of the area.[22]

Since May 2011 Sir John Sunderland has been the current Chancellor of Aston University. The university is a lead sponsor of Aston University Engineering Academy, a new university technical college (UTC) which opened in September 2012. The UTC is for students aged 14 to 19 wishing to pursue further study and careers in engineering, and is located at the edge of the Aston University campus.[23]

In October 2014, Aston announced plans to launch a new £60 million Aston Medical School in October 2015.[24] The University also announced a £35 million cash injection for a major upgrade of the campus, including a new £19 million revamp of Aston Business School and improvement work to the Aston Institute of Photonic Technologies and the School of Languages and Social Sciences.[25] 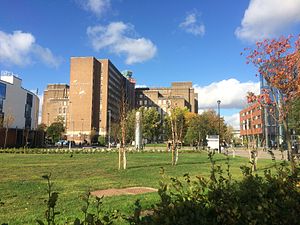 Aston's self-contained green campus, in the city centre of Birmingham.

Established in 1895 as the Birmingham Municipal Technical School,[26] The university is situated on a 60-acre campus at Gosta Green, in the city centre of Birmingham, England.[27] As well as being home to over 3,000 students, the Aston University campus has the following amenities available: sports centres, swimming pool, 120 station gym, library, cafés, restaurants, pubs, shops, travel centre, hairdresser, health centre, dentist, places of worship, opticians, a bank, automated teller machines and plenty of outside space.

Aston University Library is on four floors and contains over 250,000 books, 800 current printed periodicals and has over 700 reader places. It provides online access to over 40 electronic databases and more than 3,400 electronic journals. The Library is open 24 hours a day to Aston students and staff during term time.

Around the campus there are also various open-access IT suites, offering computer and internet access 24 hours a day, seven days a week. They offer access to a range of software packages, database systems and computer-aided learning materials.

All of the Aston University's faculties are based on one campus. They are organised into the following five schools:

The university's arms were granted on 18 March 1955 by Garter, Clarenceux and Norroy and Ulster Kings of Arms to the Birmingham Corporation, for use by the former College of Technology. They were designed to show the College's connection with the City and with the teaching of technology. The arms consist of a shield and crest. The shield has two sections – the field (the main background) which is coloured blue and a chief (the broad band across the top of the shield) of silver. On the field is a diagonal line of five gold diamonds joined one to the other, similar to the first quarter of the Arms of the City of Birmingham and incorporated in the Arms of the College to show its connection with the City. This was adopted by the family of Birmingham which derived its name from the then hamlet of Birmingham, and provided the Lords of the Manor from the fourteenth to the sixteenth centuries. On the chief is depicted an open book bound in red placed between two black hammers, showing the connection of the University with technology, the book representing learning and the hammers engineering and allied trades.

The crest is also designed to stress the pursuit of knowledge. It consists of a red torch held erect by a forearm between two branches of gold laurel. Having been originally worn on the helmet of a fully armed person, the crest is always placed on the top of the helm. The method of joining the crest to the helm was usually concealed by decoration and, in the University’s arms, this is effected by the use of a wreath and a crown. The wreath is silver, red and black, these colours being taken from the shield. It is surmounted by a mural crown (resembling a wall), which is reserved in modern grants for persons and organisations connected with public corporations. The cloth mantling which hangs down from the top of the helm is the survival of the cloak which was originally worn to protect the armour, coloured in the two principal colours of the shield, blue and gold.[28] 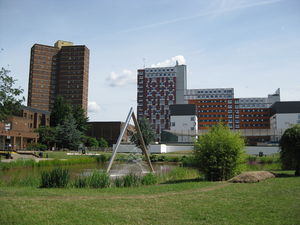 The Chancellor’s Lake at the heart of the campus with triangular fountain, 2010.
File:Ebriastonuni.jpg
EBRI building. 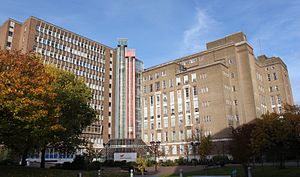 The academic dress for graduates of the University is as follows: 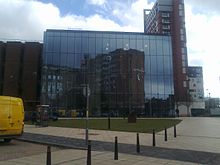 In the latest 2008 Research Assessment Exercise, Aston University was ranked in the top 12 in the UK in all four of its broad subject areas, with 86% of research undertaken was described as 'internationally significant'.[29] 88% of Aston academic staff were submitted for research assessment, one of the highest proportions in the UK. According to the RAE, the university's strengths include Business and Management, General Engineering, Subjects Allied to Medicine (Optometry, Biology, Pharmacy and Psychology), Languages and European Studies.[5]

The university is highly regarded for postgraduate level success and has been consistently ranked in the top 10 for the last 15 years.[42] It is in the UK top 5 for Masters in Management Programmes and top 40 in World rankings.[42] Ranked in The World's top 100 Universities for Graduate Employer recognition (51st).[42] Out of 126 UK Universities and Colleges, it is ranked fifth for being one of the UK's Greenest Universities[42]

In the 2011 National Student Survey, Aston's overall satisfaction score was 86%, well above the UK average of 83%. Aston also has had an 'overall satisfaction' rate above the UK average for each of the seven years of the National Student Survey so far.[5] The 2011 Performance Indicators (produced by HEFCE) showed Aston had one of the lowest drop-out rates in the UK at 3.9%.[5]

Founded in 1947[43] Aston Business School (ABS) is one of the largest and oldest business schools in the UK.[43][44] The school was ranked 8th in the UK and 33rd in the world by QS in 2012 and it is among the top 60 of business schools in the world to hold triple accreditation.[45] ABS was the first UK business school to be awarded the prestigious EQUIS accreditation, in 1999.[46] ABS is the first institution in the UK to be allied with Beta Gamma Sigma by establishing a BGS Collegiate Chapter. In 2006 it opened a new £22m extension including new study rooms and two new lecture theatres.[47]

The business school's Masters Management course was ranked by the Financial Times in 2012 as 5th in the UK, 33rd in Europe and 36th in the world.[48] The paper also ranked Aston Business School as 4th in the world for careers in 2011.[49] In the school's most recent Research Assessment Exercise in 2008, all research areas submitted ranked in the top 9 in the UK. 45% of the research submitted was judged to be 'excellent' or 'world-leading'.[29]

Aston Students' Union (formerly Guild) is a non-profit organisation set up with the aim of involving and representing the student body of Aston. The Union provides sports clubs, societies and Welfare Services, partially funded by the money accrued from the Union's commercial services.[citation needed] The Union is run by a team of permanent staff and by an elected team called the Executive who follow the rules set out in the Guild Constitution. The Union Building consists of 5 floors and is located in the centre of the Aston University Campus.

On 29 November 2006, the students voted to disaffiliate the Guild (now Union) from the National Union of Students, but voted to re-affiliate on 26 November 2014.[51] 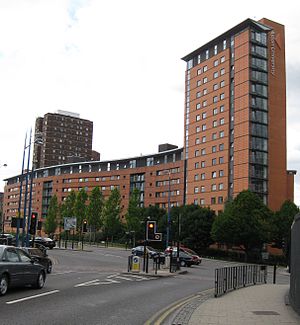 Part of the Lakeside student residences. 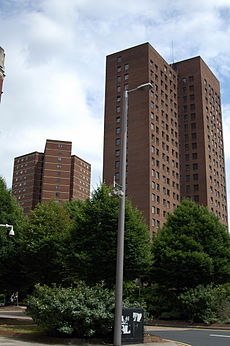 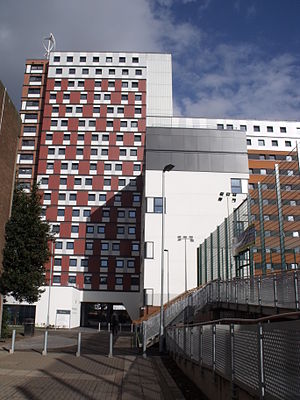 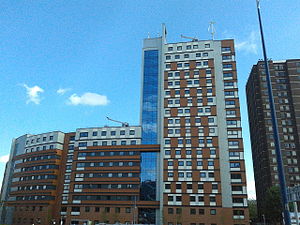 All of the accommodation in Aston University is now en-suite – 3,000 rooms in total. In the 1970s, three tower blocks containing student accommodation were constructed on Aston University campus; Dalton, Lawrence and Stafford Towers. In April 2007, Aston University submitted a planning application for demolition of the three 1970s towers and to replace them with new student accommodation blocks as well as apartments for tutors, retail units and administrative offices. Lawrence and Dalton Towers were demolished on 8 May 2011.[52] Stafford Tower, Gem Sports Centre and Lakeside Conference Centre were demolished on 28 April 2014 to make way for a new entrance to Aston University and a five-acre green space. The new landscaped area includes a new walkway into the university from the city centre and a pavilion, to be used for teaching and as a catering facility for outdoor events. The new buildings are named the William Murdoch, the James Watt, the Harriet Martineau and the Mary Sturge Residences.[53]

Another addition to Aston University student dwelling stock is the Lakeside complex on campus. Completed in August 1999, it cost £14,240,000 and has flats for approximately 650 students. The building won the Best Public Building award at the 2001 Brick Development Association Awards. 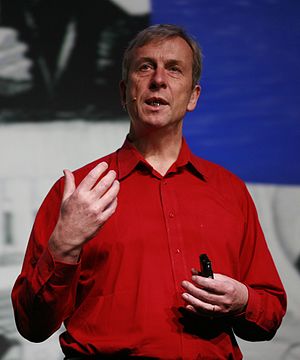