From Infogalactic: the planetary knowledge core
Jump to: navigation, search
For other uses of "Astrakhan", see Astrakhan (disambiguation).

The oldest economic and cultural center of the Lower Volga,[19] it is often called the southernmost outpost of Russia[20] and the Caspian capital. The city is a member of the Eurasian Regional Office of the World Organization "United Cities and Local Governments"[21] Its population is diverse and includes one hundred ethnicities and fourteen religious denominations.[19]

The city is located in the upper part of the Volga delta, on eleven islands of the Caspian Depression. The distance to Moscow by road is 1,411 kilometers (877 mi).[22]

Astrakhan is situated in the Volga Delta, which is rich in sturgeon and exotic plants. The fertile area formerly contained the capitals of Khazaria and the Golden Horde. Astrakhan itself was first mentioned by travelers in the early 13th century as Xacitarxan. Tamerlane burnt it to the ground in 1395. From 1459 to 1556, Xacitarxan was the capital of Astrakhan Khanate. The ruins of this medieval settlement were found by archaeologists 12 km upstream from the modern-day city.

In 1556, the khanate was conquered by Ivan the Terrible, who had a new fortress, or kremlin, built on a steep hill overlooking the Volga in 1558. This year is traditionally considered to be the foundation of the modern city.[14]

In 1569, during the Russo-Turkish War (1568–70), Astrakhan was besieged by the Ottoman army, which had to retreat in disarray. A year later, the Great sultan renounced his claims to Astrakhan, thus opening the entire Volga River to Russian traffic. In the 17th century, the city was developed as a Russian gate to the Orient. Many merchants from Armenia, Safavid Persia, Mughal India and Khiva khanate settled in the town, giving it a cosmopolitan character. 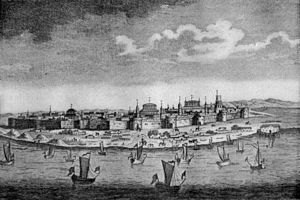 Astrakhan in the 17th century

For seventeen months in 1670–1671, Astrakhan was held by Stenka Razin and his Cossacks. Early in the following century, Peter the Great constructed a shipyard here and made Astrakhan the base for his hostilities against Persia, and later in the same century Catherine the Great accorded the city important industrial privileges.

The city rebelled against the Tsar once again in 1705, when it was held by the Cossacks under Kondraty Bulavin. A Kalmuck khan laid an abortive siege to the kremlin several years prior to that.

In 1711, it became the seat of a governorate, whose first governors included Artemy Petrovich Volynsky and Vasily Nikitich Tatishchev. Six years later, Astrakhan served as a base for the first Russian venture into Central Asia. It was granted town status in 1717.[citation needed] In 1702, 1718 and 1767, it suffered severely from fires; in 1719 it was plundered by the Safavid Persians; and in 1830, cholera killed much of the populace.

Astrakhan's kremlin was built from the 1580s to the 1620s from bricks pillaged at the site of Sarai Berke. Its two impressive cathedrals were consecrated in 1700 and 1710, respectively. Built by masters from Yaroslavl, they retain many traditional features of Russian church architecture, while their exterior decoration is definitely baroque.

In March 1919 after a failed workers' revolt against Bolshevik rule, thousands of people were executed by the Cheka under orders from Sergey Kirov. Some victims had stones tied around their necks and were thrown into the Volga.[23]

During Operation Barbarossa, the German invasion of the Soviet Union in 1941, the A-A line running from Astrakhan to Arkhangelsk was to be the eastern limit of German military operation and occupation. The plan was never effected, as Germany captured neither the two cities nor Moscow. In the autumn of 1942, the region to the west of Astrakhan became one of the easternmost points in the Soviet Union reached by the invading German Wehrmacht, during Case Blue, the offensive which led to the Battle of Stalingrad. Light armored forces of German Army Group A made brief scouting missions as close as 100 km to the city before withdrawing. In the same period, the Luftwaffe attacked the city, flying several air raids and bombing the city's oil terminals and harbor installations.

In 1943, Astrakhan was made the seat of a Soviet oblast with the RSFSR, which was maintained as a national province of the independent Russian Federation in the 1991 administrative reshuffle after the dismemberment of the Soviet Union.

After fraud was alleged in the mayoral election of 2012 and the United Russia candidate was declared the winner, organizers of the 2011–2012 Russian protests supported the defeated candidate, Oleg V. Shein of Just Russia, in a hunger strike. Substantial evidence of fraud was cited by the protesters but an official investigation failed to find significant violations.[24] The activists from Moscow found it difficult to gain traction over the issue with local residents who, like most Russians, accept political corruption as a given that is useless to protest.[25] The emissaries from Moscow persisted, buoyed by celebrities who support the reform movement, drawing 5,000 to a rally on April 14.[26]

Astrakhan is the archiepiscopal see of one of the metropolitanates and (as Astrakhan and Yenotayevka) eparchies of the Russian Orthodox Church, its only other suffragan being Akhtubinsk.

Astrakhan features a temperate continental "Aralian" semi-arid climate with cold winters and hot summers. Astrakhan is one of the driest cities in Europe. Rainfall is scarce but relatively evenly distributed throughout the course of the year with, however, more precipitation (58%) in the hot season (six hottest months of the year), which determines the "Aralian" type (as opposed to the "Turkmenon" type, with the wet season during the cold months)[citation needed].

It is this even distribution of rainfall and the relatively low annual temperature that causes the city to fall under this climate category as opposed to an arid climate.

Winters tend to be cold in the city, though by Russian standards, Astrakhan features relatively balmy winters. Summers in the city can be hot, with high temperatures in excess of +40 °C (104 °F). The mean annual temperature amplitude (difference between the mean monthly temperatures of the hottest and coldest months) is thus equal to 29.2 °C (52.6 °F) (+25.6 °C (78.1 °F) in July and −3.6 °C (25.5 °F) in January), so the climate is truly continental (amplitudes superior or equal to 21 °C (38 °F) determines continental climates, while in semi-continental climates amplitudes vary between 18 °C (32 °F) and 21 °C (38 °F)). Spring and fall are basically transitional seasons between summer and winter. The summers are much hotter than found further west on similar parallels in Europe and worldwide for the 46th parallel. 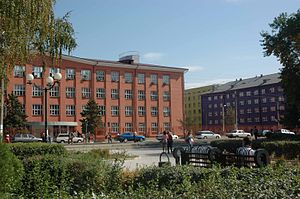 The city is served by Narimanovo Airport named after Soviet Azerbaijani politician Nariman Narimanov. It is managed by OAO Aeroport Astrakhan. After its reconstruction and the building of the international sector - opened in February 2011 - Narimanovo Airport is one of the most modern regional airports in Russia. There are direct flights between Astrakhan and Aktau, Istanbul, St. Petersburg and Moscow.

Astrakhan is linked by rail to the north (Volgograd and Moscow), the east (Atyrau and Kazakhstan) and the south (Makhachkala and Baku). There are direct trains to Moscow, Volgograd, Saint Petersburg, Baku, Kiev, Brest and other towns.

Astrakhan no longer has a tramway system. Public local transport is mainly provided by trolleybuses, buses and minibuses which is called marshrutkas.

Due to shared Caspian borders, Astrakhan recently has been playing a big role in the relations of both counties as Azerbaijani government has been heavily investing into the well being of the city, Astrakhan has recently begun to symbolize the friendship nature of both countries. In 2010 a bridge was constructed with donations from Azerbaijan which was named "Bridge of Friendship".[29] Moreover, Azerbaijani government sponsored a secondary school number 11 which carries the name of the national leader Heydar Aliyev as well as the children entertainment center named "Dream".[30] Apart from that,a park has been built in the center of Astrakhan which is dedicated to friendship between the two countries. In the last 5 years Astrkhan has been visited by top Azerbaijani delagtions on several occasions.[31][32][33][34]

Astrakhan is twinned with: