The Attorney General of Hawaii (Hawaiian: Loio Kuhina) is the chief legal and law enforcement officer of Hawaii. In present-day statehood within the United States, he or she is appointed by the elected governor with the approval of the state senate and is responsible for a state department charged with advising the various other departments and agencies of state government. He or she is responsible for the prosecution of offenses to the constitution and prescribed laws called Hawaii Revised Statutes. The Attorney General can only be removed by an act of the state senate. In rare occasions, the Attorney General serves as acting governor in the absence of both the governor and lieutenant governor from the state for an extended period of time.

The office has existed in several forms throughout the history of the Hawaiian Islands. It was created by Kamehameha III and was part of the administration of each successive monarch of the Kingdom of Hawaii. The office was kept in the provisional government, after Liliuokalani and the monarchy was overthrown, and became a part of the succeeding administration of the Republic of Hawaii. A regular part of the American model of the executive branch of government, the office of attorney general was part of the Territory of Hawaii under Section 80 of the Hawaiian Organic Act and made an appointed office after statehood was achieved in 1959.

The current Attorney General is Douglas S. Chin, who was appointed by Governor David Ige.

The department oversees various public services. These include the processing of Hawaii State Identification Cards and administering the Hawaii Criminal Justice Data Center, running the Missing Child Center, Child Support Enforcement Agency, Hawaii Internet Crimes Against Children Task Force, Hawaii Internet and Technology Crimes Unit, Office of Child Support Hearings, Tobacco Enforcement Unit, among others.[1] In accordance with Chapter 846E of the Hawaii Revised Statutes, the Criminal Justice Data Center maintains a registry of sex offenders in the state and publishes information like the following: name, prior names, aliases, nicknames and pseudonyms, year of birth and alias year of births, physical description including scars and tattoos, photograph, residence, temporary and future addresses, personal vehicles(s) driven, street name of employment and volunteer location, college/university affiliation, and crime for which convicted, judgment of conviction, judgment of acquittal, or judicial determination of unfitness to proceed for which the offender is registered, and the provision of law defining the criminal offense.[2] Likewise, the agency provides other criminal history information through the statewide criminal history record information system and Automated Fingerprint Identification System.[3]

File:Charles Coffin Harris.jpg
Charles Coffin Harris was one of the first attorneys general and was instrumental in the creation and promulgation of the 1864 Constitution under Kamehameha V.
File:Paul Neumann1.jpg
Prussian-born Paul Neumann served as Attorney General of Hawaii under Liliuokalani. In Washington, D.C., he argued against the overthrow of the monarchy. He later defended the deposed queen in trial for misprision of treason. She was convicted.
File:Hawaii Provisional Government Cabinet (PP-28-7-012).jpg
William Owen Smith (third from left) was Attorney General of the provisional government and succeeding Republic of Hawaii. From left to right: Interior Minister James A. King, President Sanford B. Dole, Smith, Finance Minister Peter Cushman Jones. 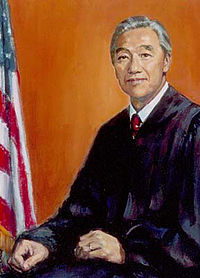 Herbert Young Cho Choy served as a territorial Attorney General. He was the first Korean American to be admitted to the bar and the first Asian American to serve as Federal judge. During his tenure on the U.S. Court of Appeals, Ninth Circuit, there were no other Asians sitting on any Federal bench.

John Ricord served as the first Attorney General of Hawaii. He arrived in the Kingdom on February 27, 1844 on the Columbia. He was the first Western-trained lawyer in the islands.[4][5] The previous year a land dispute by Richard Charlton led to a British occupation known as the Paulet Affair. A related case of Ladd & Co. required lengthy arbitration. These cases would consume his entire time on the islands.[6] Within a few weeks he swore allegiance to Kamehameha III and on March 9, 1844, was appointed first Attorney General. In July 1845 he joined the Privy Council.[7] On October 29, 1845, the executive branch of the government was formally organized through legislation he proposed. On May 17, 1847, he resigned all his offices, and on June 12 was released from his oath of allegiance, so he could resume his citizenship of the United States.[7] He left August 19, 1847.[8] The office of Attorney General was suspended until the 1860s.[9] His work on organizing the courts was taken over by the second trained attorney to arrive in the islands, William Little Lee.

On August 26, 1862, Kamehameha IV revived the office and appointed Charles Coffin Harris as Attorney General.[10] Having an attorney general proved useful on constitutional matters. Kamehameha V insisted on a new constitution that would restore some of the power to the monarchy that had been lost over time. Harris issued his legal opinion that the king had such a right and produced an early draft. A constitutional convention failed to reach agreement, so Harris got the cabinet to negotiate directly with Kamehameha V leading to the promulgation of the 1864 Constitution.[11]

A more modern controversy happened with the failed 1998 confirmation by the state senate of popular sitting Attorney General Margery Bronster, as political payback for her actions to reform the corrupt Kamehameha Schools/Bishop Estate whose trustees were friends of various powerful legislators, many Hawaiʻi residents called for the right to elect the attorney general. Several attempts failed to create the constitutional amendment.

The Attorneys General with dates of service:[10]